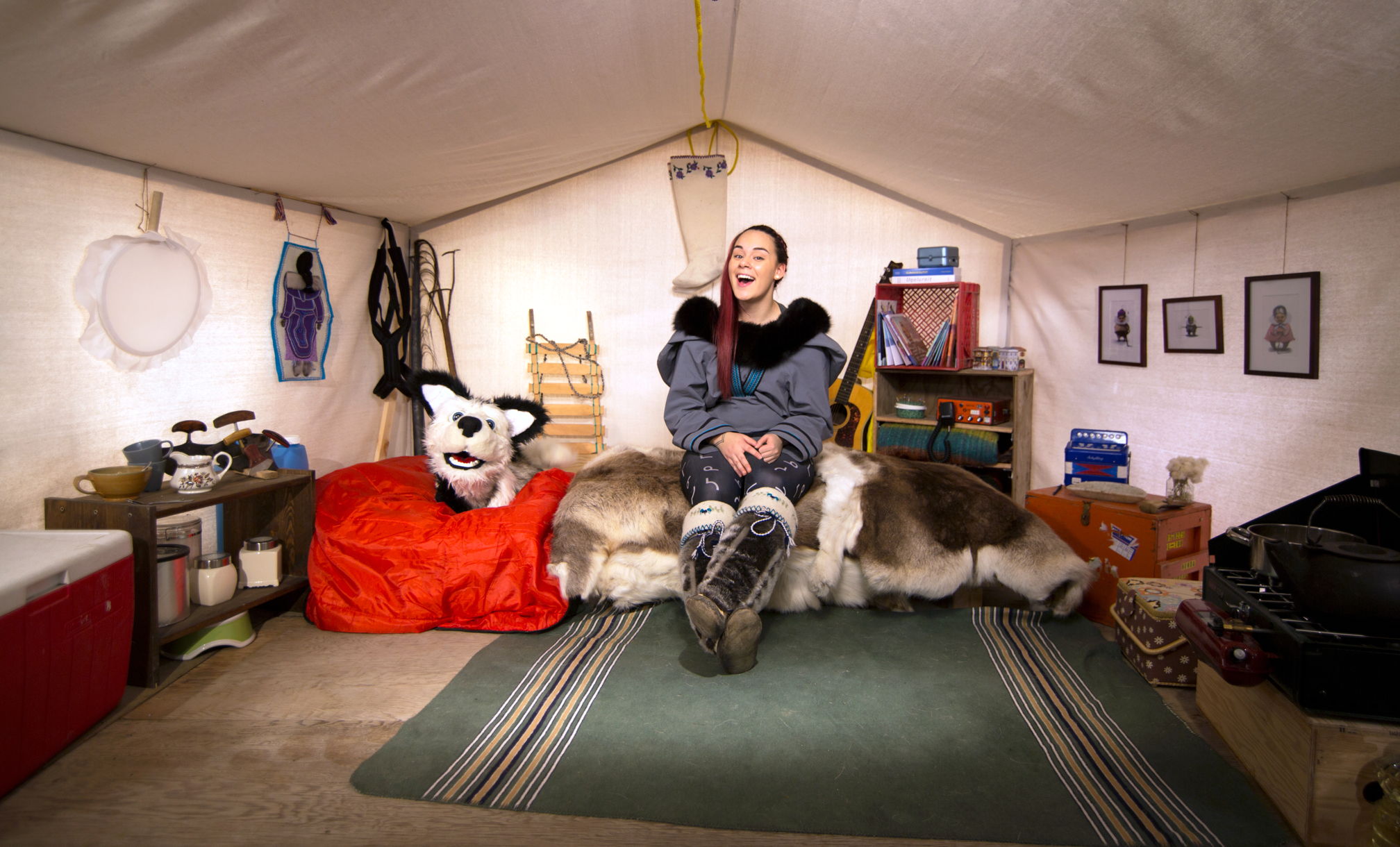 Rita Claire Mike-Murphy in a scene from Anana’s Tent, a children’s program from Taqqut Productions that will be available on Uvagut TV. (Photo courtesy of Isuma)

When the groundbreaking Uvagut TV channel launches Monday, a long-cherished dream will have been realized, the chairperson and executive director of Nunavut Independent Television, Lucy Tulugarjuk, told Nunatsiaq News this week.

“We’ve been hoping for a long time to have Inuit television, or Uvagut TV, TV in Inuktitut,” Tulugarjuk said. 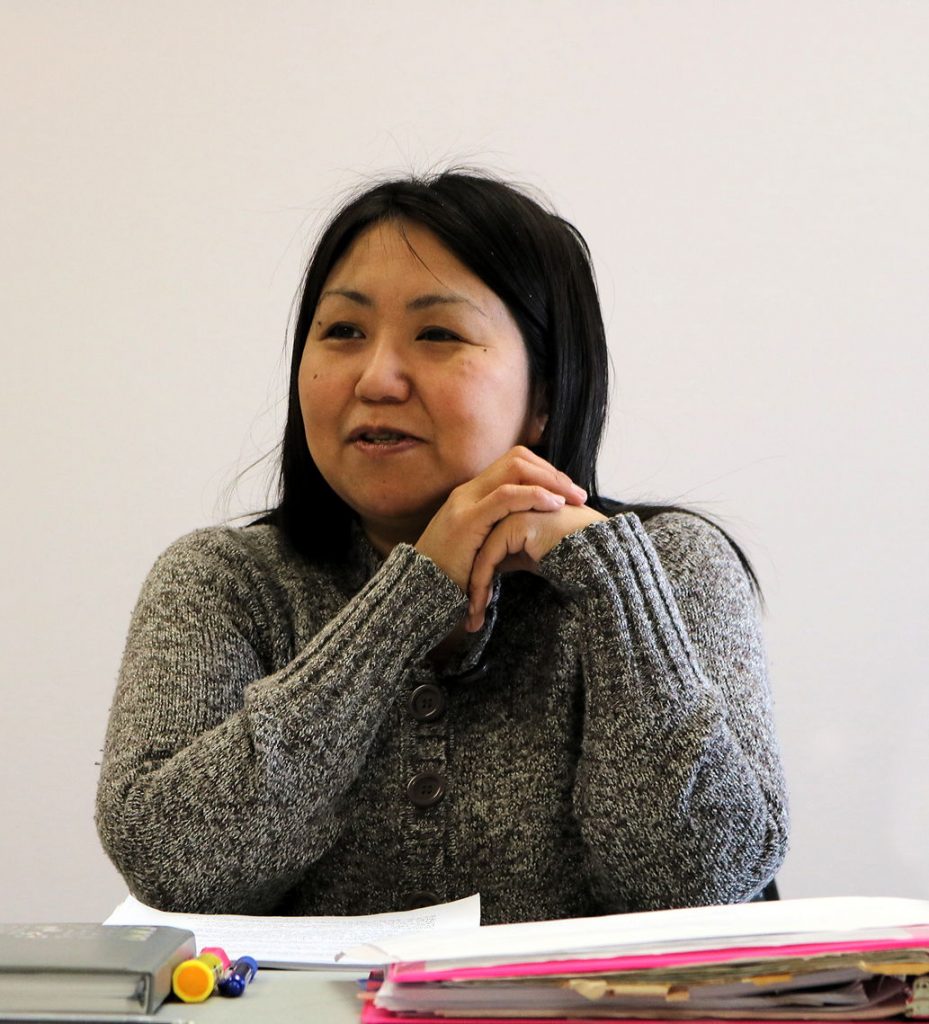 NITV and a related Igloolik-based company, Isuma TV, will build the channel on a vast database of Inuit language video material they’ve been gathering for nearly 20 years and offering to the public through an on-demand online streaming site.

Now, they’ll be able to broadcast the same material on their own channel, to be carried by Arctic Co-operatives Ltd. and Shaw Direct.

Another group that’s happy about the new channel is the Inuit Broadcasting Corp., which will supply programming to Uvagut TV for six hours a day.

“I believe that Inuit deserve to see these programs,” Manitok Thompson, the CEO of IBC, said in a statement. “They have a right to hear Inuktitut in their homes and learn more about their ancestors.”

For now, IBC says they will provide the material at no charge, and will absorb the costs internally.

“IBC is willing to work with anyone to bring our priceless programming to the public. Elders have been waiting for over 20 years for this to happen,” Thompson said.

The IBC content will include five hours a day of the highly popular Takuginai children’s show, along with other programs that will feature Inuit-language musicians, hunting scenes, community concerts, stories and legends, youth and cooking shows.

Demands for an Inuit-specific channel began soon after the Aboriginal Peoples Television Network launched in September 1999.

That’s because Inuit-language content providers such as the Inuit Broadcasting Corp. were able to gain only limited access to time slots on the new APTN network.

On APTN’s predecessor network, Television Northern Canada, which from 1992 to 1999 served Yukon, the Northwest Territories and what is now Nunavut, IBC and other producers were able to air everything they were able to produce.

But that changed after TVNC re-branded itself as APTN and began to offer predominately English and French programming, along with some Indigenous-language programs, including in Inuktitut.

“That’s why we really pushed ourselves into it because there is too little Inuktitut on APTN. It was very important to have this Uvagut TV for that reason, so that Inuktitut programming can be available 24 hours a day, seven days a week,” Tulugarjuk said.

For program providers like IBC, Taqqut Productions and the Inuvialuit Communications Society, this means they’ll have to upload their material to the Isuma TV website to have it broadcast on Uvagut TV, Tulugarjuk said.

Programs produced by entities related to the Isuma family of companies, such as NITV, Arnait Video, Artcirq and Kingulliit will also be available on the channel.

That means Inuit-language audiences will be able to watch feature films like Atanarjuat: The Fast Runner and Maliglutit.

Eventually, program providers will be paid to have their content shown on Uvagut TV — but not until after the first six months, Tulugarjuk said.

“At the moment, this is a six-month test, so at this time NITV is covering the cost, so the program providers are not paying at the moment,” she said.

A spokesperson said that in the absence of external funding, all program suppliers have agreed to defer licensing fees to get the channel on the air.

At the same time, Inuit anywhere in Canada with access to the internet will be able watch a streamed version of Uvagut TV online. Right now, that online stream is available at www.isuma.tv.

As for which channel numbers Ugavut TV will use, Tulugarjuk said that’s still under negotiation and will be announced later.

Inuit TV appears to have evolved out of a steering committee created in 2012 to work on a concept then known as “TV Nunavut.”

Tulugarjuk said her group supports Inuit TV and will continue to communicate with them.

“We would like to continue to talk and collaborate. We both have the same goal,” Tulugarjuk said.

NITV, Isuma and IBC began to pursue their own television channel last summer and in September began negotiations with ACL and Shaw.

And this Monday, Jan. 18, that work will have brought about the realization of a longstanding dream.

“I would like to thank the Arctic Co-op team and the Shaw team and all those providers, thank you so much for making this available for Inuit all over Canada,” Tulugarjuk said.

She also said Uvagut TV is negotiating with other cable and satellite systems, such as Bell Canada, to gain access to their channel line-ups.