Event hosted by the Native Women’s Association of Canada 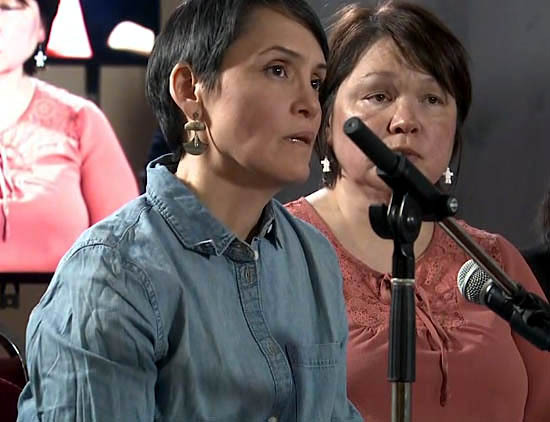 Nunavut singer-songwriter Susan Aglukark is seen in Feb. 2018 giving testimony to the MMIWG inquiry. She spoke on Monday to a Canadian summit on violence against Indigenous women. (File photo/CPAC screenshot)

Violence against Indigenous women is a public health crisis and governments should respond to it as such, a UN representative told a summit on Missing and Murdered Indigenous Women on Monday.

Bhatia recited UN statistics that estimate one in three Indigenous women have been sexually assaulted or faced some other form of intimate partner violence.

“And yet, we’re not at the point in this world where we can call this a public health crisis and treat it accordingly,” Bhatia told the International Summit of the Americas on Missing and Murdered Indigenous Women.

The event is being hosted online Monday and Tuesday by the Native Women’s Association of Canada.

“There is an important and urgent need for a concerted effort,” Bhatia told the summit.

“We already knew these rates are alarming. The pandemic has just made it much, much worse.”

UN Women, a United Nations entity that focuses on gender equality and the empowerment of women, is urging governments to prioritize violence against women in their COVID-19 responses.

“Not enough governments are doing enough to focus on violence against women,” Bhatia said.

“Every single woman in my generation was assaulted, so that one in three statistic is not accurate,” Mitchell told the summit.

“It’s not a public health crisis, it’s systemic colonial government strategy. We have a responsibility for each other.”

Nunavut singer-songwriter Susan Aglukark made brief introductory remarks at the summit on Monday, speaking about her own recovery from trauma and abuse.

“My greatest challenge was overcoming emotional fear,” she said.

“Understanding it was a big step towards addressing it. I think we need to spend a lot more time understanding the emotional effects of trauma on all of us.”

Aglukark will perform her new song Forgiveness at the summit on Tuesday. You can tune into the event through a livestream on this Facebook page.