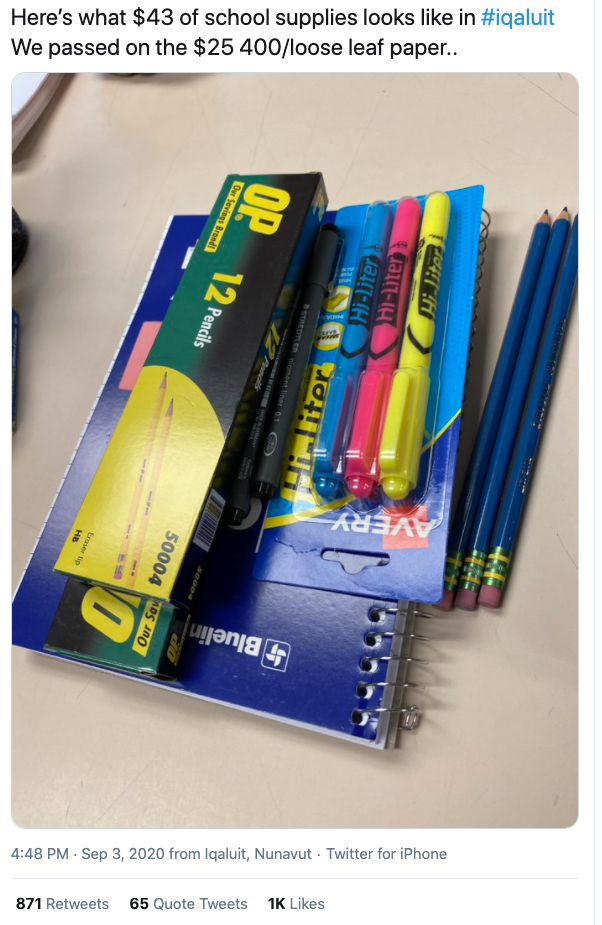 Janet Brewster posted this picture on Twitter of school supplies that cost $43 to buy in Iqaluit. It spread across Canada and soon messages and donations began to pour in. (Screenshot)

Posting highlights the high cost of living in the territory

A tweet sent at the beginning of the month highlighting the high cost of basic school supplies in Iqaluit went viral, promoting a flood of interest in donating to schools in Nunavut.

Janet Brewster sent the tweet. She’s still fielding messages from people across Canada who want to know who to send money and supplies to.

“It has been a couple of weeks of a lot of interaction with people,” she said.

Brewster and her son, who’s in Grade 10 at Inuksuk High School in Iqaluit, went to a locally owned store as they usually do at the start of the school year to buy supplies.

She wasn’t looking at the prices, so when the bill came to $43, Brewster said she and her son were taken aback.

“That was a quarter of our weekly living budget, which was shocking for both of us,” she said.

Without really thinking about it, Brewster snapped a picture of the supplies, hit send, “and it totally blew up.”

Soon Brewster called a guidance counsellor at the high school to ask if she could share the school’s address with the hundreds of people who had contacted her.

It didn’t take long for the school to say they had enough supplies. At that point, Brewster started sharing a Wikipedia list of schools across Nunavut for people to reach out to.

To Brewster, the interest shows that people care about children and are interested in learning about and addressing the high cost of living in Nunavut.

“Which,” she said, “the more people know, the more we can impact it.”

Brewster and her son wanted to buy loose-leaf paper, but it cost $24.99 for 300 sheets. They decided to buy it online on Amazon Prime.

She acknowledges that not everyone has access to the internet or a credit card to have the option to order online. Furthermore, people who live outside Iqaluit don’t have access to the free shipping offered by Amazon Prime.

When children go to school without basic supplies, it shows that they live in poverty, which highlights the income disparity that exists in Nunavut, Brewster said.

It may lead to some leaving school early, she said.

“Doing everything we can to ensure children don’t leave school early is really important,” she said.

Brewster has children who have already finished school, and she said that when they were in high school the cost of supplies was lower.

John Fanjoy, the president of the Nunavut Teachers’ Association, said that the cost of school supplies increases every year, but the Government of Nunavut’s Department of Education doesn’t change how it funds district education authorities to address this.

Schools are funded to be able to provide “basic school supplies” to students, he said.

“Your paper, your pens, your photocopy paper. That type of material.”

“Anything that would not be considered a basic school supply would have to be purchased by the students’ family, or by teachers,” he said.

“My advice to anyone who wants to make a donation is to look at the community you want to donate to, and find out what the needs are.”

Fanjoy said that the teachers’ association is always pushing to get the GN to give more money to public education. In particular, he wants to see changes to the formula that determines how much each district gets.

The funding formula, as Fanjoy describes it, is based on a snapshot of how many students are enrolled at all the schools in a district at a given time. That means that if only 40 per cent of the students enrolled at the school are in attendance when that snapshot is taken, that’s the number that determines funding.

If the funding was based on the total number of students enrolled instead of how many are attending at a particular time, Fanjoy believes it would encourage more students to go to school.

“A well-funded school, a well-equipped school, is going to encourage attendance,” he said. “So it kind of defeats the purpose to decrease your funding based on students not coming to school.”

Fanjoy wants freight for school supplies to be subsidized so that people who don’t make a lot of money can afford to buy them.

“Families who are the hardest hit economically, and don’t have access to a credit card, are being forced to spend their money on extra high prices for school supplies,” he said.

“It’s not an equitable system.”

David Joanasie, Nunavut’s minister of education, said that the normal contribution agreement that the GN has with DEAs allows for “adequate resources to supply schools.”

That covers supplies such as pencils, paper, “the basics, there’s staplers, glue,” he said.

“Of course cleaning supplies, notebooks, construction paper, binders, duotangs, all those supplies are covered under the normal DEA funding allocations.”

He said the attention from the tweet was because people needed to buy “a different set of items, perhaps that was outside of the typical school supplies procured on a yearly basis.”

The GN provides DEAs with a letter showing how many students are enrolled in their district, and what that means in terms of budgetary funding they get that year, Joanasie said.

The funding formula is “cabinet approved,” he said, but it’s not spelled out to DEAs.

Doug Workman, the president of Iqaluit’s DEA, said the formula lacks transparency. Joanasie said “we’re taking a very good hard look at this and hope we can move forward with something better.”

Nunavut’s Department of Education told Nunatsiaq News that schools have all the supplies they need for the year, and declined a request to talk with a teacher.

Workman said that the IDEA has been promised donations from hundreds of different people, and that they were starting to trickle in this week.