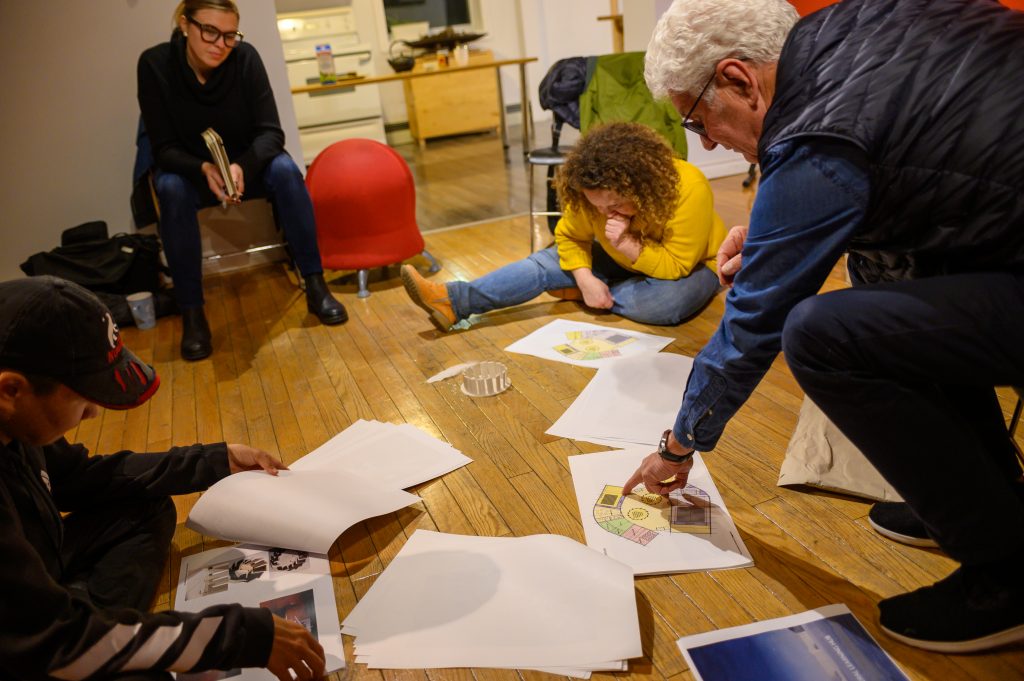 Architect Donald Schmitt points to illustrations of what Iqaluit’s future Qaggiq performing arts centre could look look like, while Qaggiavuut team members and others from the community look on. (Photo by Dustin Patar)

Last week, a small handful of community members had a chance to sit down in Iqaluit and candidly chat with the key players involved in Qaggiavuut’s ongoing Qaggiq project.

“It’s not just another performing arts facility,” said Schmitt. “It’s not just throwing up a theatre or rehearsal spaces. It’s doing so in a way which is flexible, diverse.”

The suggestions brought forward during the meeting were themselves diverse, ranging from talk of an outdoor market area where artisans could sell their wares to a space for the community to process their catches of seal and other country foods.

In addition to the consultation process, the feasibility study that began in August is continuing as planned and is expected to finish early next year.

Alongside electing a new board, the meeting gave the community further access to Schmitt and the consultants from Savira Cultural Capital.

For those who attended the meetings last week, the question of the Qaggiq is not one of if, but when.

“There’s a ton of support at very senior levels of sources of funding and people in the performing arts community,” said Schmitt.

“This will happen, but it’s also got to really be based on the community. So the more we connect and hear from the community, the better it will be.”

For those who weren’t able to attend the meetings, but would like to contribute their thoughts to the project, Qaggiavuut is still accepting ideas.