Despite a return to service, inconsistent water access in a frequent issue, local teacher says 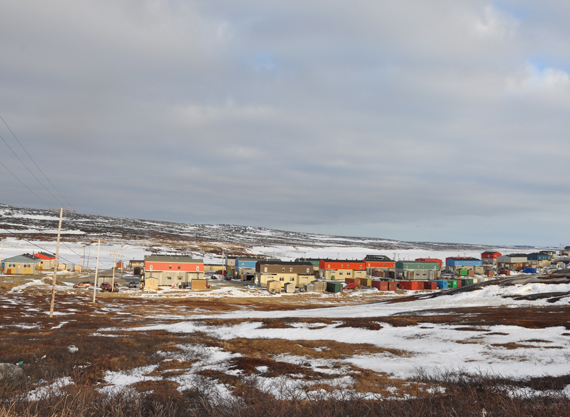 Water service has been restored in Inukjuak nearly four weeks after the community’s main pipe froze. The frozen pipe had forced the community to get water directly from the river instead of from its water treatment plant.

The pipe, which connects the community’s water pump to the distribution facility, froze after a heater broke, said mayor Pauloosie Kasudluak. Municipal and KRG staff had been on the ground since day one working to fix the issue.

Poor weather conditions made it difficult to restore service, Kasudluak said. Inukjuak had been under several blizzard and extreme cold warnings over the past few weeks, according to Environment Canada.

“It’s a pretty long pipe going to the water plant, it’s been a challenge because it’s been very cold and we had very bad weather for a couple days since it broke,” he said.

But while the pipe was frozen, that wasn’t possible.

Instead, the municipality drew water from the river through a hole in the ice and trucked it to homes.

But over the past few weeks, that process was made more difficult because some of its trucks have been not working properly.

In order to get the pipe back online, workers had been using heaters and generators to thaw the pipe, said Paul Parsons, the director of the KRG’s municipal public works department.

Parsons added that Hydro Quebec has also stepped in by lending some emergency generators to support the thawing efforts.

“We’ve been applying heat to most of these manhole sections, these access points to the supply line,” he said last week, while service was still ongoing.

Water issues not limited to the past few weeks

Inukjuak’s water troubles have not been limited to the emergency that the community had been grappling with for the past few weeks.

Didier Geoffrion, a teacher who moved to Inukjuak from Montreal in 2019, says issues relating to water access in the community are so frequent that some residents accept living without water delivery for weeks on end as normal.

When the municipality is operating at full capacity it has five or six water trucks on the road, but on Tuesday, only three water trucks were operating, Kasudluak said.

While service was down over the past few weeks, residents lined up to get untreated water that was pumped out of a hole in the river, Geoffrion said.

Geoffrion says inconsistent access to water is having a toll on the health and well-being of his Grade 6 students. He says that the lack of water in homes leads to kids showing up to school wearing dirty clothes. He also said that the school has been forced to shut down several times due to water issues.

“These kids and these people, they shouldn’t be concerned about: are they going to be able to shower, to clean themselves, or clean their house or their clothes?” Geoffrion said.

As well, truck deliveries depend on the sealift resupply during the warmer months of the year.

“What was purchased last year … with the delays with the supply chain, the contract we had with the company that would sell us these trucks told us we would, in fact, have to wait until the following sealift, meaning this year,” Parsons said.

Geoffrion says he hopes there can be a long-term solution for the community that welcomed him in. He also said he hopes his students, who he looks to as the future leaders of their community, can grow up with consistent water access as a fundamental right.

“I see these people evolve a lot since I got here, and they help me to become a better person through their values,” Geoffrion said. “But to see them—these great people, those great leaders, future leaders, very wise persons—not being able to sustain to their most basic needs. It’s unfair.”