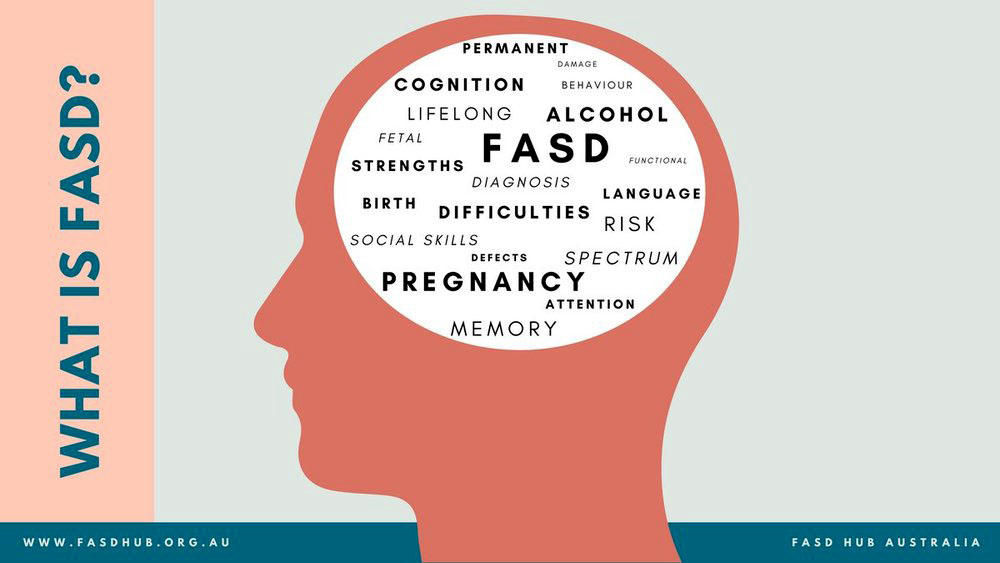 This is a graphic produced by the FASD Hub Australia, which distributes information about the disorder online.

The Government of Nunavut still can’t generate numbers on the prevalence of FASD within the territory’s population, a spokesperson for the GN’s Department of Health told Nunatsiaq News this week.

“At this time, ascertainment of the existence of FASD is based on case-reviews, and is not possible at the population level using traditional surveillance techniques,” the GN said.

That’s because the territorial epidemiological surveillance work that the GN does is “designed to provide data for national surveillance programs, which do not include surveillance for FASD,” said the email, prepared by Wende Halonen, a senior communications officer at the GN, in response to questions from Nunatsiaq News.

Also, the GN says such work is difficult and expensive.

“Epidemiological surveillance for FASD is an emerging area of work, requires significant resources from clinical and non-clinical perspectives, and is premised on internationally agreed upon case definitions,” the Health Department said.

But at the same time, the GN says it now has the capacity to diagnose FASD, through a three-person team that recently started up at the Qikiqtani General Hospital.

The term “FASD,” short for fetal alcohol spectrum disorder, covers a range of permanent, lifelong mental and physical disabilities experienced by those who receive exposure to alcohol in the womb.

It’s the most common known cause of developmental disability in Canada. According to the CanFASD research network, about four per cent of the country’s population, around 1.4 million people, likely have FASD, at a cost to governments of at least $4 billion.

Experts say those who suffer from FASD can do well in life if they are diagnosed early and get the help they need.

But its prevalence in Nunavut—as in many other remote and rural regions of Canada—has never been measured.

And that makes it difficult for health and education leaders to justify the spending of government money to help people with FASD, whether they’re school kids or developmentally disabled adults struggling to get jobs and training.

“Indeed, we don’t know anything about the current prevalence of FASD among northern communities or remote communities,” Dr. Svetlana Popova of the Centre for Addiction and Mental Health told Nunatsiaq News in an interview earlier this month.

A study released last month by a team Popova led found the prevalence of FASD is higher in certain vulnerable groups, such as correctional inmates, children in foster care and some Indigenous populations.

Be wary of stigmatizing stereotypes

Some researchers worry that the absence of research could result in Indigenous peoples being stereotyped.

“Prevalence studies with Indigenous communities in particular have produced conflicting results because of continued surveillance, stigmatization, and stereotyping in these populations,” says an article that the CanFASD network published in July 2018.

“There is an urgent need for additional exploration of these issues in order to properly identify vulnerable groups who may require specialized support,” the article said.

But without early intervention and help, those who do have FASD often struggle behaviour problems in school, and either wind up inside the correctional system or find themselves permanently barred from participation in the labour market.

The GN does gather information from expectant mothers on substance abuse during their pregnancies, but the GN does not use it to help them figure out the prevalence of FASD.

“Maternal and prenatal care is of high priority to the department,” the Health Department email said.

Last March, Education Minister David Joanasie admitted that, although he knows there are likely many cases of undiagnosed FASD among Nunavut students, his department can’t track them right now.

Adam Lightstone, the MLA for Iqaluit-Manirajak, told Nunatsiaq News that he was “a bit taken aback” by that response and that the department must do more to find out who needs help for FASD.

“Early intervention is crucial for those living with FASD, as we must assist them to learn to live with their disability before it is too late,” Lightstone said earlier this month.

But despite its well-publicized capacity problems, the GN is not entirely ignoring FASD.

For example, the three-person team at the Qikiqtani General Hospital in Iqaluit is now past the pilot project stage and is now set up to do FASD diagnosis, the Health Department said in its email.

That team consists of a neuropsychologist, a pediatrician and a speech-language pathologist.

“Children at risk for having FASD receive an initial assessment by a team of trained health care professionals,” the department told Nunatsiaq News.

“The team then collaborates in a multidisciplinary fashion (with guardian consent) to determine the diagnosis and care plans for children with prenatal alcohol exposure.”

Right now, that small team works only within the Baffin region, the GN said.

That appears to partly address a big criticism that Justice Robert Kilpatrick, the former senior judge of the Nunavut court, made in a judgment he issued in 2013, when he lambasted the GN’s Health Department for being unable to diagnose FASD.

That was in relation to a case involving the sentencing of a Nunavut offender who could not get an FASD diagnosis.

Kilpatrick warned that the Nunavut court might force the GN to pay for such diagnostic services in the future.

“If the territory lacks the means to provide the diagnostic services required, the court has the ability to order out-of-territory forensic assessments to be performed where necessary. The court will not hesitate to do so where this is required for sentencing purposes,” Kilpatrick said.

Audrey McFarlane, the executive director of CanFASD, a nationwide research network, said Nunavut has actually been involved in the issue for years, through an entity called the Canada-Northwest FASD Partnership, a knowledge-sharing group comprising the three territories and the four western provinces.

“They have been the leaders in Canada in developing evidence-based support services long before anyone else in central or eastern Canada,” McFarlane said. 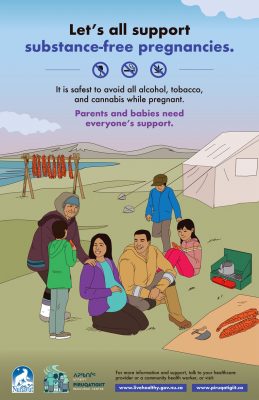 This is a poster that the Government of Nunavut has produced recently to raise awareness about FASD.

One FASD activity the Health Department does emphasize is its prevention work.

“The GN strives to share messages that acknowledge and value the people with FASD who live in our communities, while at the same time reducing the number of substance-exposed pregnancies,” the Health Department said.

To that end, the GN told Nunatsiaq News it has recently produced the following:

• An updated poster to raise awareness about FASD

• A handout about substance-free pregnancy for young adults, pregnant women and their support people

And the GN also said other FASD activities include the following:

• Community health workers provide key messages about reducing the risk of FASD and have community events during FASD Awareness Month every September.

• Lesson plans to accompany videos about reducing the harms of alcohol have been produced by the Ilisaqsivik Society. Two of them discuss alcohol use and pregnancy.

• Nunavut health officials participate in the FASD Mentoring Project, a project coordinated by the Saskatchewan Prevention Institute and funded by the Public Health Agency of Canada, which provides training to community workers about FASD.

• All healthcare providers are supposed to screen for alcohol use during pregnancy.

• Mental health and addictions care are available to anyone who wants support.

That covers much of what McFarlane said governments should do more of, which includes:

• Encouraging doctors, nurses and counsellors to give consistent messages on FASD when advising expectant mothers.

• Identifying women who need help with support and addictions treatment, including women who have FASD themselves.