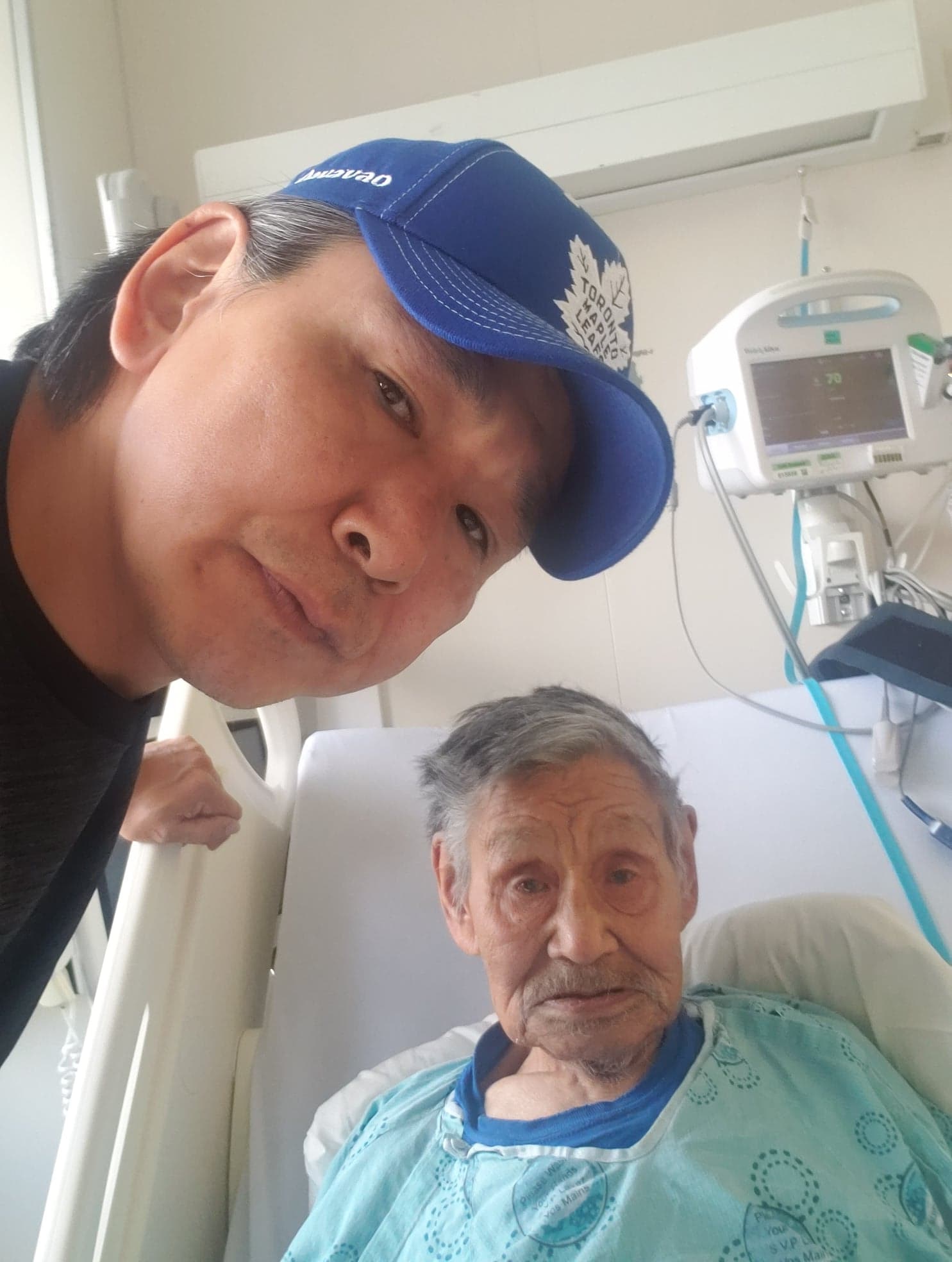 This May 2020 photo captured Qavavao Peter’s last visit with his father Ejetsiaq Peter at the Ottawa Hospital. The 83-year-old died in early June, shortly after he was diagnosed with COVID-19. (Photo courtesy of Q. Peter)

“We have no choice”: Nunavut families of COVID-19 victims lament risks of travel

The 83-year-old Kinngait elder flew to Qikiqtani General Hospital in Iqaluit for treatment, but weeks later, he still couldn’t keep food down. He was sent south to the Ottawa Hospital in late April to have a feeding tube put in.

By then, most of the country was in some form of lockdown, just weeks into the COVID-19 pandemic.

“We really didn’t want him to go,” said Qavavao Peter, Ejetsiaq’s son. “But we knew we had to get this done.”

In Ottawa, Ejetsiaq was regularly tested for COVID-19. He tested positive for the virus three days after his surgery.

Hospital staff told the family the man was likely infected in the operating room. His condition gradually worsened and he died on June 7.

“We didn’t expect him to catch it at all, but you never know where it will show up,” Qavavao said. “He even got it in a place where he was supposed to be most protected.”

Ejetsiaq may have been the first Nunavummiut to die of complications from COVID-19, but most people across the territory didn’t hear about it.

The Nunavut government says five people from the territory have died from the disease since the start of the pandemic, but only counts one death in its statistics.

That’s because the government only counts cases caught in the territory. This is a problem, Peter said, because so many Nunavummiut have no choice but to travel south for health care.

He’s calling on the government to be more transparent about the risks associated with health-care travel. 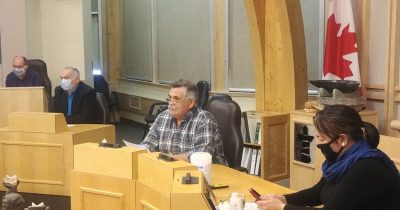 Months later, on Dec. 20, the Government of Nunavut announced the territory’s first COVID-19-related deaths after two residents — one from Rankin Inlet and another from Arviat — died in southern hospitals. Soon after, the government revised that statistic down to one death.

The Department of Health has not explained why some deaths were announced, and others weren’t, but has said the territorial government is only recording the deaths of individuals who were infected with the virus in Nunavut.

“The discussion around that is still going on at this time,” he said. “Stats are not a high priority — there are so many other pressing issues at this point.”

Qavavao says it’s difficult for his family to hear other deaths announced and mourned.

“No one talked about it. My dad was from Nunavut, born and raised here,” he said.

“It kind of hurt me. It’s like he’s just a guy who went south and died.”

Expectant parents in Nunavut have few options for care

On Jan. 2, Silatik Qavvik, a 35-year-old mother from Sanikiluaq, died in a Winnipeg hospital, six weeks after she was infected with COVID-19, and just weeks after she delivered a baby girl.

Her death has prompted renewed calls for maternity care and midwifery services in Nunavut. Women can deliver in three communities: Iqaluit, Cambridge Bay and normally in Rankin Inlet, though birthing services are suspended there now due to staffing shortages.

“For many years, we’ve advocated for community-based childbirth,” said Rebecca Kudloo, the president of Pauktuutit Inuit Women of Canada.

“Especially now with a pandemic, we worry a lot when our people go south for medical. But we have no choice.” 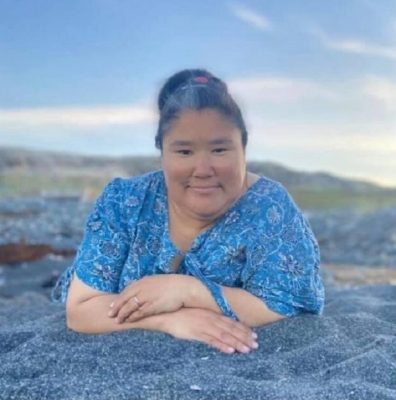 Silatik Qavvik died in a Winnipeg hospital in December, a few weeks after the Sanikiluaq woman was infected with COVID-19. Her husband and newborn baby were also infected but both recovered from the virus. (Photo courtesy of Qavvik family)

That was the case for Qavvik and her partner Peter, who flew to Winnipeg on Nov. 10 ahead of the birth of their fifth child.

“Me and my wife had no choice but to go to Winnipeg,” he said.

Apart from hospital appointments, Peter said he and his wife only went out once to shop for baby essentials.

Silatik started showing symptoms around Nov. 20, he said: she had chills and was short of breath. She tested positive for COVID-19 a couple days later.

The couple’s daughter, Lisi, was born by caesarian section at St-Boniface hospital on Nov. 23 – the same day the couple’s eldest daughter was born 16 years earlier.

The baby girl also tested positive for COVID-19. The infant was transferred to the Children’s Hospital of Winnipeg for special care; she’s since recovered and is back home in Sanikiluaq.

Qavvik saw his wife for the last time on Nov. 25, just before he too tested positive for the virus.

“I said, ‘See you later and I love you,’” he recalled, tearfully.

Medical travel is a reality of Nunavut’s health-care system. A 2015 study found that 58 per cent of all Nunavut patients requiring both inpatient and outpatient care must travel outside of the territory.

Since the beginning of the pandemic, however, the Nunavut government says it’s been looking to minimize the number of patients who must fly out of the territory.

“The priority is always that the best safety measures are taken, whatever care our patients need,” said Health Minister Kusugak. “That hasn’t changed.”

The territorial government is also working to bring more services to the territory, he said, like some cancer screening and chemotherapy in Iqaluit and certain surgeries performed in Rankin Inlet.

“There’s some that have to go,” Kusugak said. “But I think we have significantly less medical travel to the south.”