“We need to start somewhere and this is our somewhere” 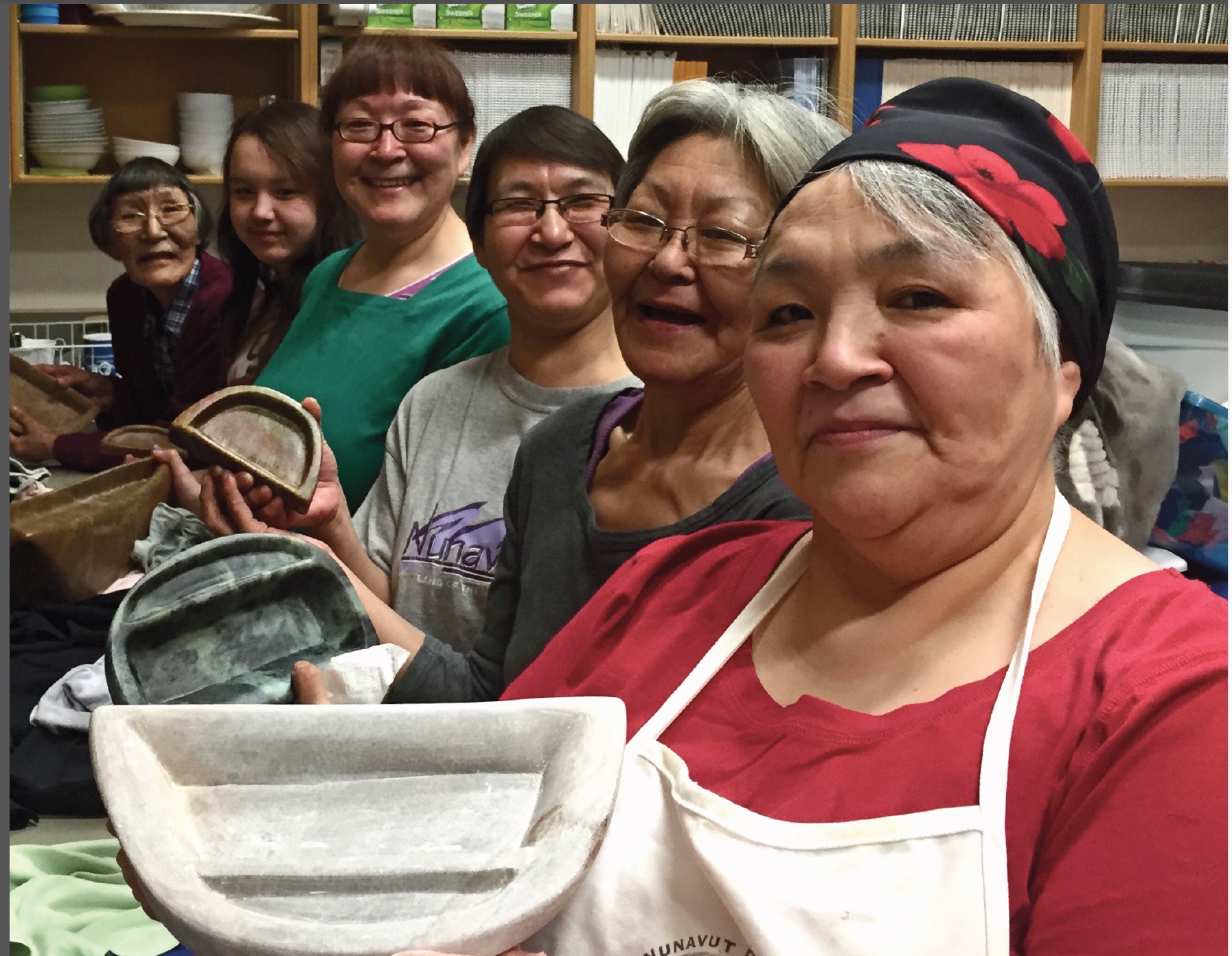 These women hold traditional oil lamps that they made last year in a workshop offered by the Kitikmeot Heritage Society, or Pitquhirnikkut Ilihautiniq, in Cambridge Bay. This photo is on the cover of PI’s five-year strategic plan for 2019-2024 which aims to save and grow Inuinnaqtun. (Photo courtesy of PI)

Inuinnaqtun won’t go down without a fight.

There are fewer than 1,000 mother-tongue speakers of this Inuit language left in western Nunavut, but the Cambridge Bay-based Kitikmeot Heritage Society, or Pitquhirnikkut Ilihautiniq—in Inuinnaqtun, “learning through culture”—has developed a plan to revitalize “our language, our identity our pride and our being,” as Pamela Gross, PI’s executive director and the mayor of Cambridge Bay, put it.

The erosion of the western Arctic’s once-strong Inuinnaqtun has resulted from a variety of factors including the powerful forces of residential schools and relocations that took Inuinnait away from their homes, culture and language.

So today revitalizing Inuinnaqtun “can be overwhelming to think about and daunting,” Gross said. “But we need to start somewhere and this is our somewhere.”

PI released its five-year language revitalization strategy this year, which is also the United Nations International Year of Indigenous Languages.

Step one involves matching speakers in three Nunavut communities—Gjoa Haven, Kugluktuk and Cambridge Bay—and Uluhaktok, on the west coast of Victoria Island, in the Northwest Territories with apprentices.

The mentors and apprentices will then spend 300 hours of intensive language learning.

During this mentor-apprentice approach, which has been successfully used with other endangered languages, mentors pass on the language and transmit cultural knowledge to the new generation of competent speakers, who will in turn become mentors and language teachers.

PI is waiting on various funding agreements, but Gross said the plan is to start this mentor-apprentice program up in the next month and a half.

The involvement of Uluhaktok in the program is natural, Gross said, because before 1999, this Inuinnait community was part of the same region and people.

Reversing the loss of Inuinnaqtun in communities will now take everyone’s collaboration, she said, that of elders, language specialists, competent speakers, and linguists who can create programs to document the language, mentor the next generation of speakers, and develop digital tools for knowledge sharing.

To that end, PI’s Uqarluta Inuinnaqtun, Let’s speak Inuinnaqtun!, campaign, will create a working group with language specialists and youth who represent the four Inuinnaqtun-speaking communities as well as researchers in Inuktut revitalization, linguistics and Inuinnait heritage.

The challenge is enormous.

In Cambridge Bay, with about 1,800 residents, and the hub for the entire region, Inuinnaqtun has suffered huge erosion.

In 2016, the proportion of Inuit aged up to 34 years who could have a conversation in Inuinnaqtun was much lower than in the other Kitikmeot communities, a Statistics Canada report on the evolution of language in Nunavut has found.

In 2016, only 13.8 per cent of preschool-aged Inuit children in Cambridge Bay could converse in Inuktut., down by half from 2001, according to the StatCan report, which is unreleased but circulated at a recent language conference in Nunavut.

In terms of numbers, this means there are only about 355 Inuinnaqtun mother-tongue speakers in Kugluktuk, 345 in Cambridge Bay and fewer still in Gjoa Haven, where Netsilingmiut Inuktut is stronger.

In 2016, in Cambridge Bay, only 28.7 per cent spoke any Inuinnaqtun at home and only one per cent used it exclusively at home, the report found.

PI’s strategic plan for 2019-2024 focuses on Inuinnaqtun language survival through activities such as archeological research. Last summer its team piloted the first year of Inuinnait Ingilraatuqanit Ayuiqharvik, an Inuinnait Cultural School at a multi-year archeological field project in the Kiluhiqtuq (Bathurst Inlet) area, intended to increase students’ knowledge and pride in history and culture, and develop their Inuinnaqtun language, traditional knowledge and archeological field research skills.

But to realize its goal, over the next five years PI will need $6.5 million. Language mentor-apprentice programs alone are expected to cost $500.000.

Gross would like to walk down the streets of Cambridge Bay someday and hear Inuinnaqtun spoken everywhere.

But to get to that point, PI envisions a full-time immersion program delivered by elders and fluent speakers that targets young parents, a youth movement that makes speaking Inuinnaqtun “cool,” engagement of parents and families to serve as home language nests, where only Inuinnaqtun is spoken, more mentor-apprentice programs and a comprehensive documentation of Inuinnaqtun.

Gross is also a student of the language. You can hear her speak about this in one of series of interview testimonials for Uqarluta Inuinnaqtun.

This week, Gross, who has been following a University of Victoria Indigenous language revitalization program through Cambridge Bay’s Nunavut Arctic College, will be on the land with elders to work on her on-the-land terminology.

The drive to save Inuinnaqtun will also get help from Kaapittiaq, the Nunavut-based coffee company PI’s Pitquhikhainik Ilihainiq Inc. established last year.

Each year, 75 per cent of Kaapittiaq’s revenue will be used to create programs promoting Inuit culture, language and knowledge.