“We have some key things to look forward to,” says Cambridge Bay’s Pamela Hakongak Gross 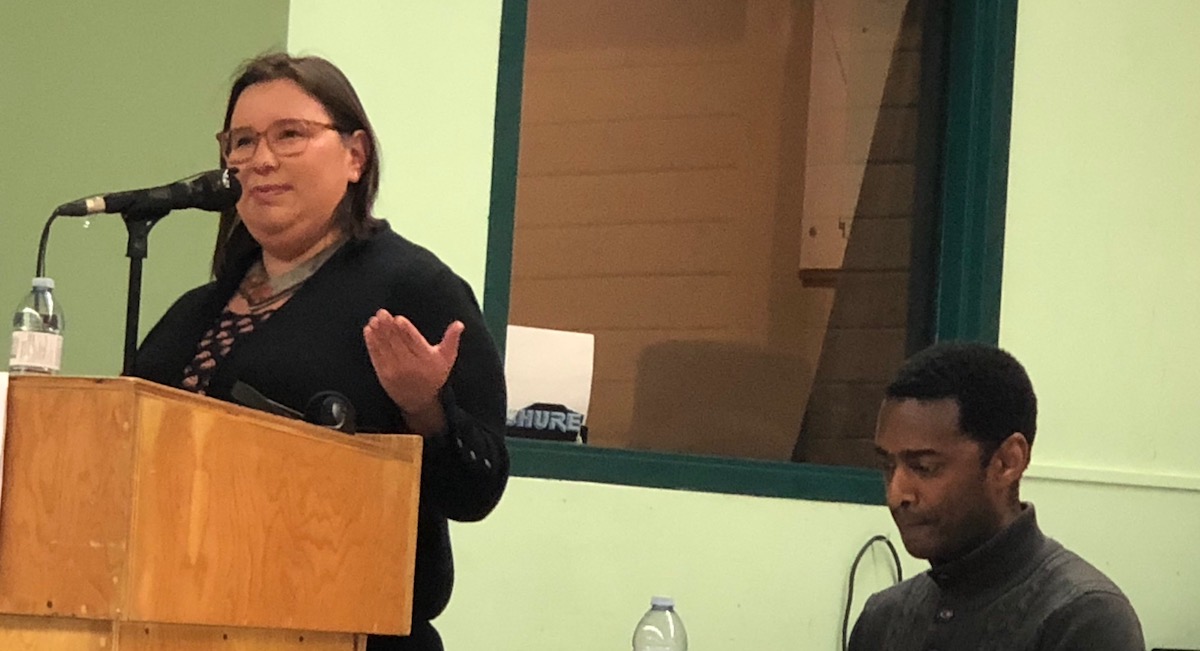 Cambridge Bay’s newly elected mayor, Pamela Hakongak Gross, speaks on Oct. 16 at a forum for municipal candidates. On her right is Wayne Gregory, who ran against her in the Oct. 28 municipal election. (Photo by Jane George)

“Quana to our beautiful community and your faith in me to serve as mayor. I’d like to thank you all for your support,” Gross said in a message posted at about 2:30 a.m. mountain time.

“I’d like to thank Wayne Gregory for putting his name in and giving us this democratic right of choice. It was a close election. Wayne, may you continue to serve our community in the various roles you hold,” Gross said.

Early voting in the western Nunavut hub had drawn more than 427 voters of the 1,034 on the voters’ list.

On election day, Oct. 28, the vote was close, with 70 casting votes for Gross, and 71 voting for Gregory.

“We have some key things to look forward to such as a new arena-multiplex, nine-bay garage, incinerator, greenhouse, improved roads and walking trails and mental health and wellness programs,” Gross said in a statement posted on social media shortly before the municipal election.

At an Oct. 16 forum for the candidates in the municipal election, Gross, who is also the executive director of the Pitquhirnikkut Ilihautiniq/Kitikmeot Heritage Society, spoke her opening words in Inuinnaqtun.

Gross said she had arrived back in Cambridge Bay six years ago, after spending her childhood mainly in the Northwest Territories and then in Ottawa for post-secondary studies at Nunavut Sivuniksavut and Carleton University.

Before the election, Gross had urged everyone in the community of about 1,800 to vote.

Gross, who lost the last territorial election to Jeannie Ehaloak in November 2017, was elected mayor of Cambridge Bay on Dec. 11, 2017.

Among the 11 municipal councillor hopefuls who contended for eight council seats, the following were elected, according to Elections Nunavut:

All candidates for the local district education authority won by acclamation: