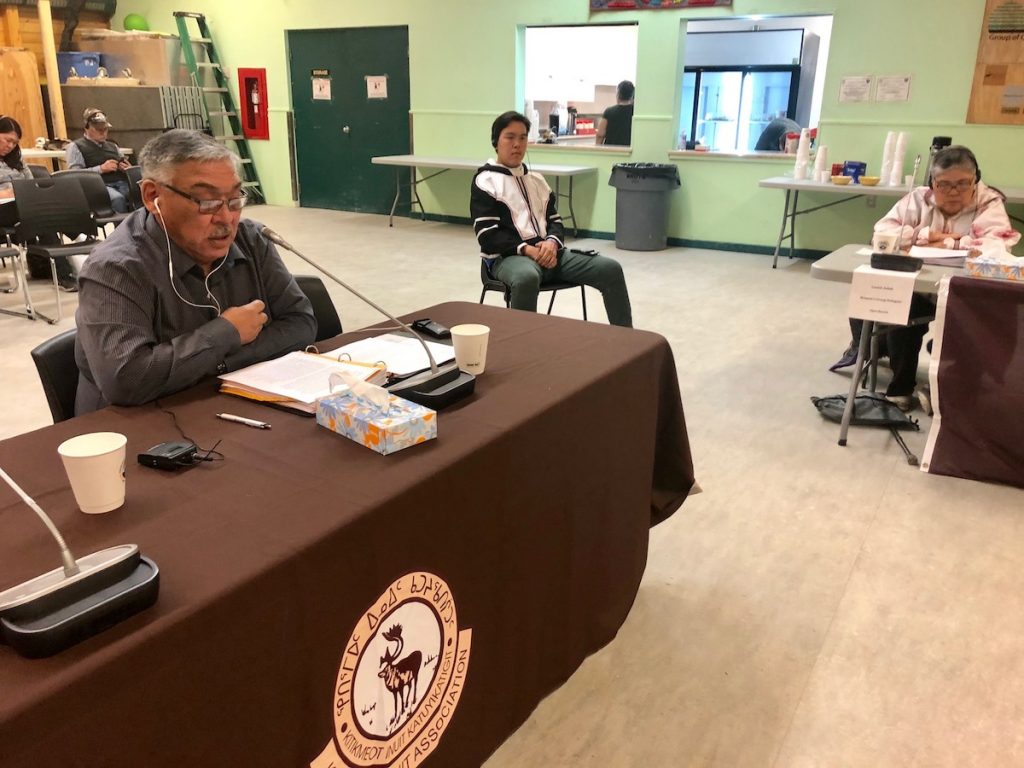 CAMBRIDGE BAY—Comparing the realization of the Grays Bay Port and Road to winning the Stanley Cup, Kitikmeot Inuit Association president Stanley Anablak said he wants Nunavut Tunngavik Inc. to turn its $7.25-million loan to the KIA into a grant to help turn the $525-million project into reality.

NTI is “sitting on millions of dollars,” Anablak said today in his president’s report to the KIA’s annual general meeting, which focused mainly on Grays Bay.

“There is an important role for NTI to become a champion and investor of Inuit-led infrastructure projects.” he said.

The Grays Bay project would involve the construction of a 227-kilometre all-weather road running from the northern end of the Tibbit-Contwoyto winter road near the Northwest Territories border to a deep-sea port at Grays Bay on Coronation Gulf.

“NTI is well-positioned to contribute funds that could leverage much larger amounts of infrastructure dollars from government and private industry. We should put these funds to work,” Anablak said.

That’s why Anablak said he wants to see the NTI loan to be converted into a grant.

“Because I like to practice what I preach, I also intend to support similar requests from other regional Inuit associations for their projects, when they can provide similar benefit to Nunavut Inuit,” he said.

Anablak said he plans to raise this at the NTI annual meeting in Rankin Inlet later this month.

Grays Bay received a $21.6-million boost from Ottawa this past August, breathing new life into the project.

“As a hockey fan I like to think that with this important first step we have made the playoffs and are well positioned to get past the first round. However our ultimate goal is to see this road and port constructed and move into operation. This would be our Stanley Cup,” Anablak said.

The Kitikmeot region would never have to endure the kind of situation that arose last October when the Marine Transportation Services barge failed to arrive in Kugluktuk and Cambridge Bay with its cargo.

“Having our own deep-sea port connected to the south by an all-season road will help prevent such an event from happening again,” Anablak said.

Grays Bay will support exploration and mine development, he said, along with the vision of having a trade and transportation corridor that stretches from Yellowknife to the Arctic Coast.

“Given that over two days in August the federal government made a combined investment of over $50 million in this corridor, I believe they are taking this vision very seriously,” he said.

Along with that corridor, Anablak said he would like to see development of the Izok corridor zinc-lead mining project promoted by Chinese-owned MMG Resources Inc., which has been mothballed since 2013.

The Grays Bay project would be “shovel ready” in two-and-a-half to three years, Anablak said, backed by “an innovative environmental assessment process” based on Inuit traditional knowledge and complex engineering studies.

“I have made this project a key objective for KIA,” he said.

This past summer Anablak attended the opening of Agnico Eagle Mining Corp.’s Meliadine gold mine near Rankin Inlet.

“Inuit are participating meaningfully in the economy and are starting to make inroads into the higher-paying job categories,” he said.

“People in that region are building their own homes, having nice vacations and eating well. In short they are achieving a middle-class life that Canadians in other parts of the world would recognize. I want to see the same happen in our Kitikmeot communities.”