Wind- and solar-powered greenhouse takes off in Gjoa Haven

“We wanted to push the limits of the green energy system”

Two sea cans in Gjoa Haven, pictured here, have been transformed into a greenhouse and research station. (Photo courtesy of the Arctic Research Foundation)

Inside two sea cans in Gjoa Haven, butter lettuce is peeking through pots of soil. Next to that, cherry tomatoes have turned a ripe shade of red.

It’s just the beginning of what will be grown inside these shipping containers, which have been retrofitted into a research station where community members work with government researchers and a non-profit organization.

The project is funded in partnership with the Arctic Research Foundation, Agriculture and Agri-Food Canada, the National Research Council of Canada, and the Canadian Space Agency. The project’s partners collaborated on the design and testing of a “green energy-powered controlled environment production unit for growing plants in Canada’s North,” a news release said.

The Arctic Research Foundation is non-profit organization that coordinates scientific, cultural and economic research in the Arctic.

“When I first heard of [the project] I thought it would never work up here. No. Not in this 40 below zero. Now I know anything is possible if you have the right idea…. I had a taste of the vegetation. It was fresh,” Peter Akkikungnaq, a Gjoa Haven elder, said in the release.

The project is called Naurvik, which means “the growing place” in Inuinnaqtun.

Naurvik is powered by a row of solar panels and two wind turbines. A diesel generator has also been installed on site to automatically kick in if both wind and sun fail.

Adrian Schimnowski, CEO of the Arctic Research Foundation, told Nunatsiaq News finding a location for the project was critical.

“We had to find a location where there’s adequate wind, where it’s close to the community but also allows safety. It’s up on a gravel hill, very stable ground, and it’s visible from the town, visible from the school. But it’s also kind of across the bay. It’s also a location that allows different types of expansion,” Schimnowski said.

Work on the project began in 2014, when Schimnowski was in Gjoa Haven for work that led to the discovery of the wreck of the Franklin expedition.

But things started to move quickly in the fall of 2019, when materials for the project arrived on the sea lift.

“As soon as it arrived, we started assembling. By end of October, we had some ready to plant. By November, we had our first crop. So it’s been very, very quick.” 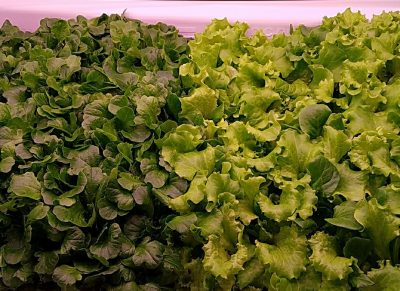 Butter lettuce and microgreens grow inside the greenhouse in Gjoa Haven. (Photo courtesy of the Arctic Research Foundation) 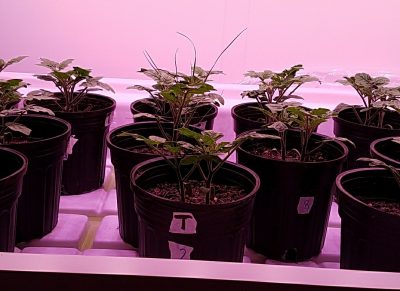 Tomato plants sprout inside the greenhouse in Gjoa Haven. (Photo courtesy of the Arctic Research Foundation)

For now, food grown in the greenhouse is given to elders in the community. But by 2025, Schimnowski hopes a larger community-led effort to grow food with renewable energy will be operational in Gjoa Haven.

Community members have also expressed interest in adding a community freezer for country food to the project.

Schimnowski said the team wanted to get the project built before winter to test how it would operate in 24-hour darkness.

“We wanted to push the limits of the green energy system but also see what works and what doesn’t work—and learn quickly from it, so that as we start getting into more daylight, we can really benefit from the initial experiment at the beginning, realize what the true potential is.”

“We’re growing plants that are resilient and hearty, but we need to learn and teach while we’re also learning how to balance the systems within the environment. Soon, we’ll be adding more complicated plants, like berries and tea.”

Right now, five people from Gjoa Haven work as technicians at Naurvik. The technicians check in weekly with the project’s partners. 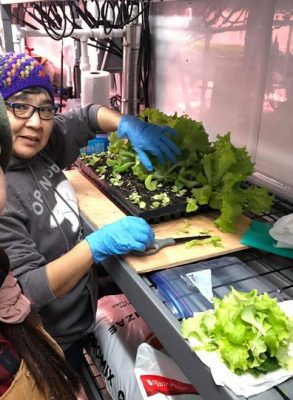 Schimnowski said there is already interest to expand the project by adding more grow pods and more sea can research stations.

“The idea is that we can expand, almost like adding modules to a space station,” Schimnowski said.

“Our partners are already thinking of adding another grow pod, maybe two. Ideas are floating around where we can have one that’s just for education, where students can come in and do their own planting experiments.”

Naurvik’s team also hopes the project can be built in other communities.

“I think we will expand to the next community that’s open to the idea. The community of Gjoa Haven will help in the training and the ideas and collaborations. It’s this really neat, magic thing that’s happening,” Schimnowski said.