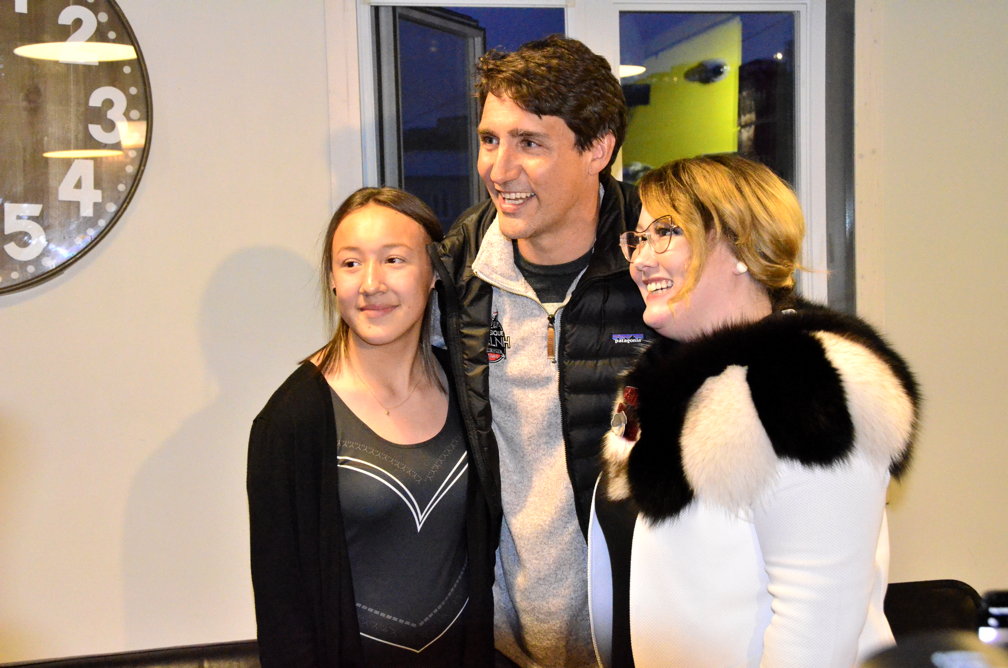 The Nunavut Liberal candidate, Megan Pizzo-Lyall, poses for a photo this past Aug. 1 with Prime Minister Justin Trudeau and one of her nieces, 13-year-old Hayley Groves. (Photo by Jim Bell)

The upcoming contest for Nunavut’s seat in the House of Commons began to take shape this past Aug. 1, when the national Liberal leader, Prime Minister Justin Trudeau, gave his blessing to Liberal candidate Megan Pizzo-Lyall.

The next federal election is set for Oct. 21, and all national political parties are nominating candidates, raising money and setting out their positions.

Pizzo-Lyall has been campaigning on Facebook for the Liberal nomination in Nunavut for months. She’s the only person to publicly state any interest in the nomination and she appears to have won it by acclamation.

In a short speech, she praised nationwide economic measures the Liberal government has taken since 2015, such as the Canada Child Benefit, a beefed-up Canada Pension Plan, and tax reductions for middle-income earners.

For Nunavut, she stressed housing and communications with the people.

“It is my duty to see more funding allocated to increasing the number of public houses, eliminate poverty,” she said.

Pizzo-Lyall said she’s best at “building relationships and increasing communications with each community in Nunavut.”

Ties to all three regions

In an opinion piece that Nunatsiaq News published last March in connection with the 20th anniversary of the creation of the Nunavut territory, Pizzo-Lyall said Nunavut’s small have-not communities should not be forgotten.

“We need to pay attention to and focus on improving the quality of life in these communities. They matter, and we need to show that by taking action,” she wrote.

Pizzo-Lyall has ties to all three Nunavut regions. She was born in the Kitikmeot region, growing up in Taloyoak and attending high school in Cambridge Bay.

As a young adult she moved to Iqaluit for college and stayed for 10 years, during which time she served as an Iqaluit city councillor. She now lives in Rankin Inlet, where she works as manager of operations for the Inuit investment bank, Atuqtuarvik Corp.

“Nunavut is my heart. I am most content when I am on the land with family and friends,” Pizzo-Lyall said.

Trudeau, after a long day that included an announcement of two protected areas in Iqaluit that morning, followed by a long flight to and from Arctic Bay for photo-ops and a community feast, endorsed Pizzo-Lyall in glowing terms.

“I’m so excited that your voice in Ottawa will be none other than this extraordinary, bright young leader, Megan Pizzo-Lyall,” Trudeau said.

At the same time, he said his Conservative rivals refused to listen to Nunavummiut and, if elected, would take the country backwards.

Earlier that day in Iqaluit, Trudeau did not mention national Conservative leader Andrew Scheer by name, referring only to the “Harper government.”

“No one up here wants to go back to the Harper approach,” Trudeau told reporters, in an obvious attempt to portray Scheer as a clone of Stephen Harper, who Trudeau defeated in October 2015.

“Both of us talk about sovereignty, but for the Harper government it’s very much about military and geographic presence and a focus on the people, the Inuit, was simply not there,” Trudeau told reporters that morning.

“What we’ve managed to do is put the Inuit at the centre of building the present and the future in partnership, and with support from Canada. I think that change is the biggest change we’ve seen,” he said.

However, in a visit to Iqaluit this past June 20, Scheer, accompanied by the Conservative candidate in Nunavut, former MP Leona Aglukkaq, accused Trudeau’s government of having no vision for the North and no plan to develop its natural resources.

Aglukkaq, who is attempting to regain the Nunavut seat she won for the Conservatives in 2008 and 2011 but lost in 2015, said the Liberal government has ignored Nunavut’s infrastructure needs.

“Since 2015, we have not seen any federal investments related to addressing the major infrastructure gaps that we do see here. So it is going backwards, in my view,” she said last June.

Pizzo-Lyall’s candidacy appears to help the Liberals move past the profound embarrassment that their former MP, Hunter Tootoo, created for them in 2016.

But in mid-2016, Tootoo’s political career was destroyed by scandal, after he admitted to a “consensual and inappropriate relationship” with a junior female staff member.

Tootoo lost his prestigious cabinet job, where he served as minister of fisheries and oceans, and departed the Liberal caucus, never to return.

Since then, Tootoo has spent the last three years languishing in obscurity as an Independent MP. Late last month, he announced he’s leaving public life and will not contest the Oct. 21 federal election.

The New Democratic Party has not yet announced a candidate for Nunavut.

“He’ll go pose for photos and hug northerners, but when he gets back to Ottawa and behind closed doors, Trudeau is working for the big polluters and corporations that take advantage of Iqaluit families,” Singh said in a statement.

The Green Party has not yet announced a Nunavut candidate either.

“We have yet to have a confirmed candidate in Nunavut. However, we are working with several people in the community to identify a candidate,” a Green party spokesperson told Nunatsiaq News.

As for the People’s Party of Canada, led by Maxime Bernier, Peter Scholz of Arviat is listed on the Elections Canada nomination contest database as having won the PPC nomination by acclamation.

According to the latest numbers from the CBC national poll tracker, the Conservative Party would take 34.5 per cent of the vote were an election held today.

The Green Party has risen to 10.9 per cent, the Bloc Québecois is at 4.9 per cent and the Peoples Party of Canada sits at only 2.7 per cent.