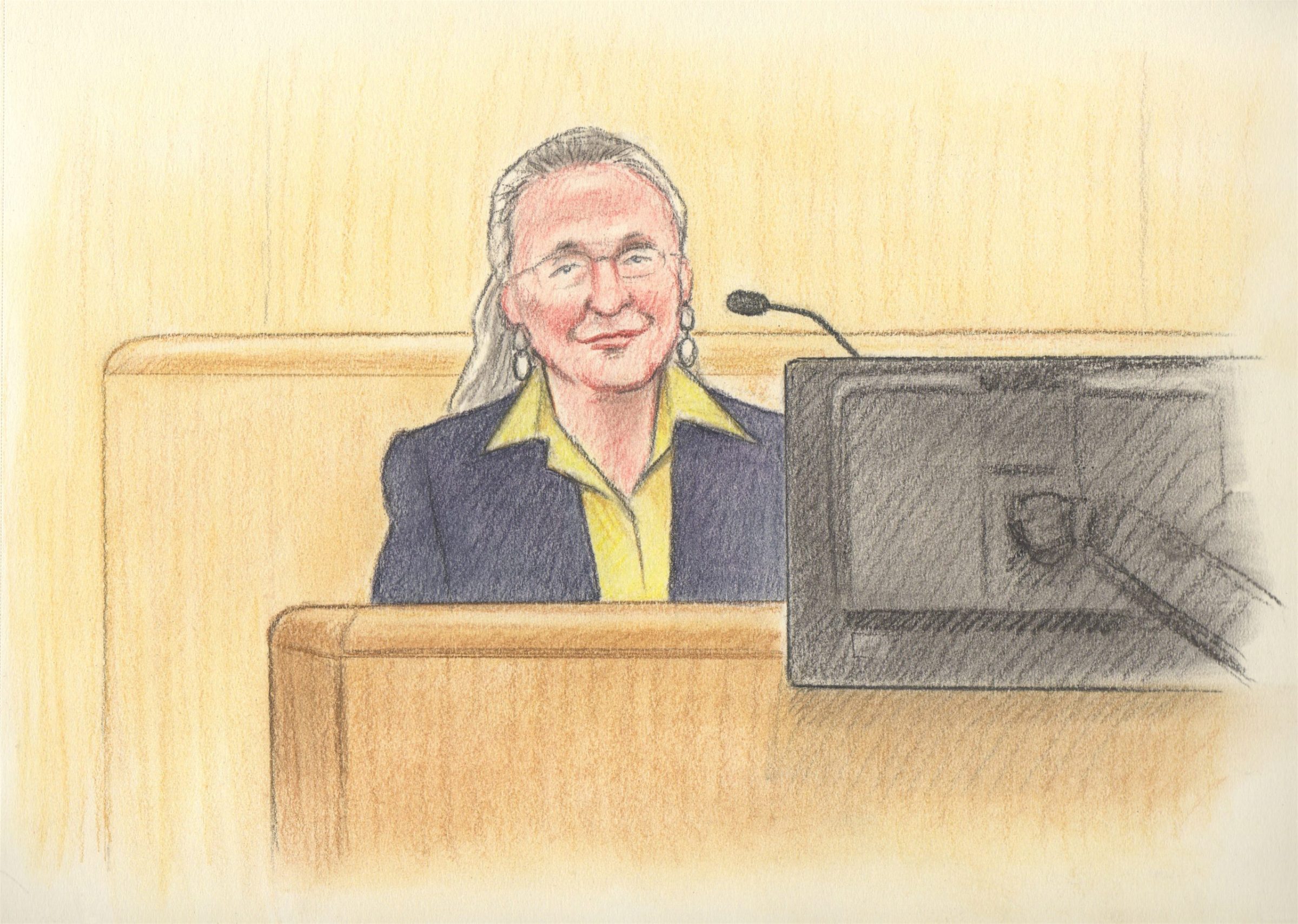 Janet Dudley, a witness in the murder trial of Tyler Hikoalok, testifies in the Ottawa courthouse on Wednesday. Hikoalok, 22, faces a first-degree murder charge in the 2018 death of Elisabeth Salm, who was a colleague of Dudley’s at the Christian Science Reading Room on Laurier Avenue. (Courtroom sketch by Lauren Foster-MacLeod)

The jury at the first-degree murder trial of a Cambridge Bay man in Ottawa heard Wednesday from the witness who discovered the victim badly beaten and unresponsive.

Tyler Hikoalok, 22, is charged in the 2018 death of Elisabeth Salm, a 59-year-old volunteer librarian at the Christian Science Reading Room at 141 Laurier Ave. West in Ottawa.

Janet Dudley, a colleague of Salm, testified she had been working at the reading room, just a few blocks away from the Ottawa courthouse, for about a year when on May 24, 2018, she went to the centre for her usual 1 to 5 p.m. shift.

The Christian Science Reading Room functions as a space where people can come to ask questions about religion, study the Bible, read literature or simply chat with the librarian on duty, Dudley said.

It was generally a quiet space and had an open-door policy. The entrance, accessed through the lobby of the Gillan Building on Laurier Avenue, was unlocked during the day and anyone could walk in.

There were no security cameras inside the reading room or in the lobby of the Gillan Building and librarians typically worked alone, Dudley said.

Dudley said that around 12:54 p.m. that day, she entered the church’s front sales room and called softly for Salm, knowing she had been scheduled to work the morning shift there.

When she didn’t hear a response, Dudley walked toward the back study room where the door was open.

She testified that she found Salm lying “perfectly straight” on her back on the floor.

Salm’s face was swollen and bloodied, blood was pooling around her head on the floor, and her pants were pulled down and hooked around her right ankle, leaving her naked from the waist down, Dudley said.

Dudley said she approached Salm, saying her name and touching her shoulder.

“I told her it would be alright, you’re going to be alright,” Dudley said.

She didn’t hear or see anyone else in the reading room, recalling that what struck her in the moment “was the complete silence” in the space.

Dudley used the reading room’s landline phone to call 911, and as she waited for paramedics to arrive, she tried to follow the operator’s instructions to perform chest compressions on Salm, she said.

She then rolled Salm onto her right side, which eased her breathing, and grabbed a sweater from a coatrack to cover Salm’s lower body.

When paramedics arrived a few minutes later, Dudley checked the petty cash box in the front sales room, and it was untouched, she said.

She then called Salm’s husband, Lyle Young, to tell him something had happened to his wife and to come to the reading room.

On Wednesday afternoon, photos presented during the testimony of Ottawa Police Service forensics identification detective Tim Nolan showed a large patch of what appeared to be blood on the carpet of the reading room where Salm was found.

Photos taken of Salm’s clothing after the incident showed blood stains near the neck of her blouse and on her pants.

In her testimony, Dudley remembered her colleague fondly.

“I was impressed with her dedication, her gentleness and her thoughtful intelligence to everything she addressed,” she said.

The trial is expected to continue Thursday with testimony from paramedics who responded to the scene.