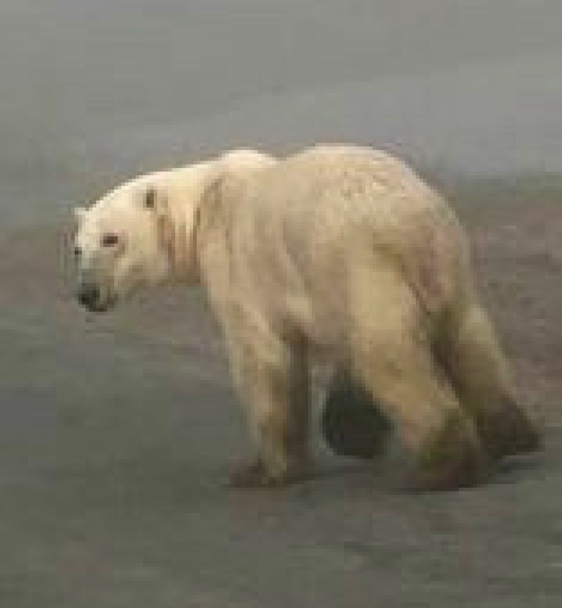 Rankin Inlet resident Joan Tugak said she has “never been so scared” as when she came face to face with a polar bear that had wandered into town early Wednesday. (Photo courtesy of Joan Tugak)

‘Never been so scared. I was screaming for my life,’ says Joan Tugak

When Rankin Inlet resident Joan Tugak walked into town early Wednesday for her daily coffee at the Quickstop, she didn’t know she’d soon be “screaming for [her] life.”

“Who can expect a bear to be on the road near [the] Quickstop?” Tugak said in a message to Nunatsiaq News, describing the moment she came face to face with a polar bear outside the shop around 7 a.m.

“Never been so scared. I was screaming for my life,” Tugak said

Thankfully, she said, a man named Wayne Kusugak was close by. When he heard Tugak screaming, he came to get her in his truck.

“I’m so thankful for Wayne Kusugak for being there. I screamed all the way to his truck [and] even safe inside the truck, I couldn’t stop,” she said.

Once she was in the Kusugak’s truck, they followed behind the bear for a while, she said, keeping an eye out for anyone else who may have been outside. They honked the truck’s horn to warn people.

Kusugak said she phoned a wildlife officer, who helped direct the polar bear away from the community. 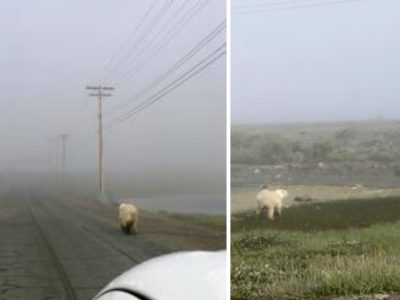 A pair of photos taken by Rankin Inlet resident Joan Tugak show a polar bear that wandered into town early Wednesday morning being chased away by a truck. (Photos courtesy of Joan Tugak)

Nunatsiaq News was unable to reach Kusugak to hear his part of the encounter, but a five-second video posted on his Facebook page shows a polar bear running alongside the road and past houses as Kusugak films it and follows in his truck.

In the video caption, Kusugak said he chased the bear toward Williamson Lake.

It hasn’t been spotted since early Wednesday, he said, adding that having a polar bear so close to the town centre is a concern, and there’s a possibility it could come back.

“[It’s] very unusual. We did have polar bears this spring that were sighted. So we’re expecting quite a bit of bears this summer for Rankin Inlet,” he said.

After Wednesday’s close encounter, Aokaut said the HTO office is discussing ways it can help people in the hamlet prepare and stay safe in case another polar bear wanders into town.

“That’s in the works right now, so we’re planning to get their monitors hired for the evening,” he said.

Tugak said after the scary start to her morning, friends and family have been messaging her to check that she’s alright.

She said she keeps having “flashbacks” of looking at the bear.

On Thursday morning, Tugak plans to borrow her daughter’s Honda and drive to the Quickstop instead for her usual coffee.