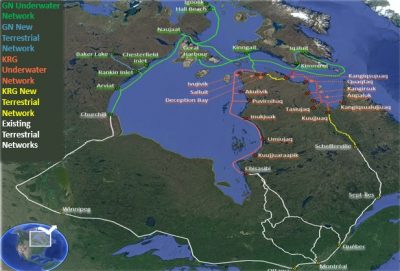 A look to the future: this map shows the KRG’s plans to connect all 14 Nunavik communities to fibre optic cable, plus the Government of Nunavut’s future plans for a mixed underwater and terrestrial fibre network to communities in South Baffin and the Kivalliq. (Image courtesy of KRG)

The first leg of Nunavik’s fibre optic cable network is set to be installed along the Hudson Bay coast starting at the end of July, officials with the Kativik Regional Government’s Tamaani Internet said this week.

The KRG awarded Alcatel Submarine Networks the contract to install the Eastern Arctic Undersea Fibre Optic Network, which will extend an underwater fibre network this summer from Chisasibi, Que., on the shore of James Bay, north, with spurs to Kuujjuaraapik, Umiujaq, Inukjuak and Puvirnituq.

The French firm is expected to start its work at the north end of the network, with a schedule to arrive offshore of Puvirnituq on July 29, Daryl Combden, director for the Kativik Regional Government, told regional councillors at a meeting in Tasiujaq this week.

Alcatel will spend about six weeks installing marine cable to each of those four communities, Combden said. The electronics installation and testing will happen in November, while the high-speed activation is set for December.

A recent landslide recorded upstream of Kuujjuaraapik, which dumped an estimated 45 million cubic metres of debris into the Great Whale River, is not expected to impact the installation to that community, Combden said.

With fibre optic set to be operation by the end of that year, that should free up about 25 per cent of Nunavik’s satellite capacity to other communities, Combden said.

Tamaani Internet is now looking for funding to extend that network to the rest of region’s communities.

Now KRG officials say they’re looking to the Quebec government to kick in the remaining $34 million needed to finalize that leg of the project, which they hope to have in place by the end of 2023.

Next, the regional government is eyeing more government funding to close the circuit, by bringing that submarine cable from Kangiqsujuaq down through Ungava Bay, with spurs in Quaqtaq, Kangirsuk, Aupaluk, Tasiujaq, Kangiqsualujjuaq and Kuujjuaq.

“That will be the final piece of the puzzle,” Combden told council on Tuesday.

“That’s estimated at about $120 million. So we’ll keep working towards that.”

Quebec government officials have asked the regional government to do a marine survey of the Ungava coast to ensure that the high tides in that region won’t interfere with the installation of fibre cable offshoots, Tamaani said.

In the meantime, Tamaani has already secured $17 million to build a terrestrial fibre link between Kuujjuaq and Schefferville, Que., to connect to that community’s fibre optic network, expected to be in place by the end of 2023.

Once Nunavik’s fibre optic cable is installed in Salluit, the KRG said it will work with the Government of Nunavut to extend that cable across the Hudson Strait to Kimmirut, Kinngait and Iqaluit.