Young northerners the focus of this year’s Arctic prize money

“We’re not sure if the selection committee just got sick of us but … we’re happy to be here!” 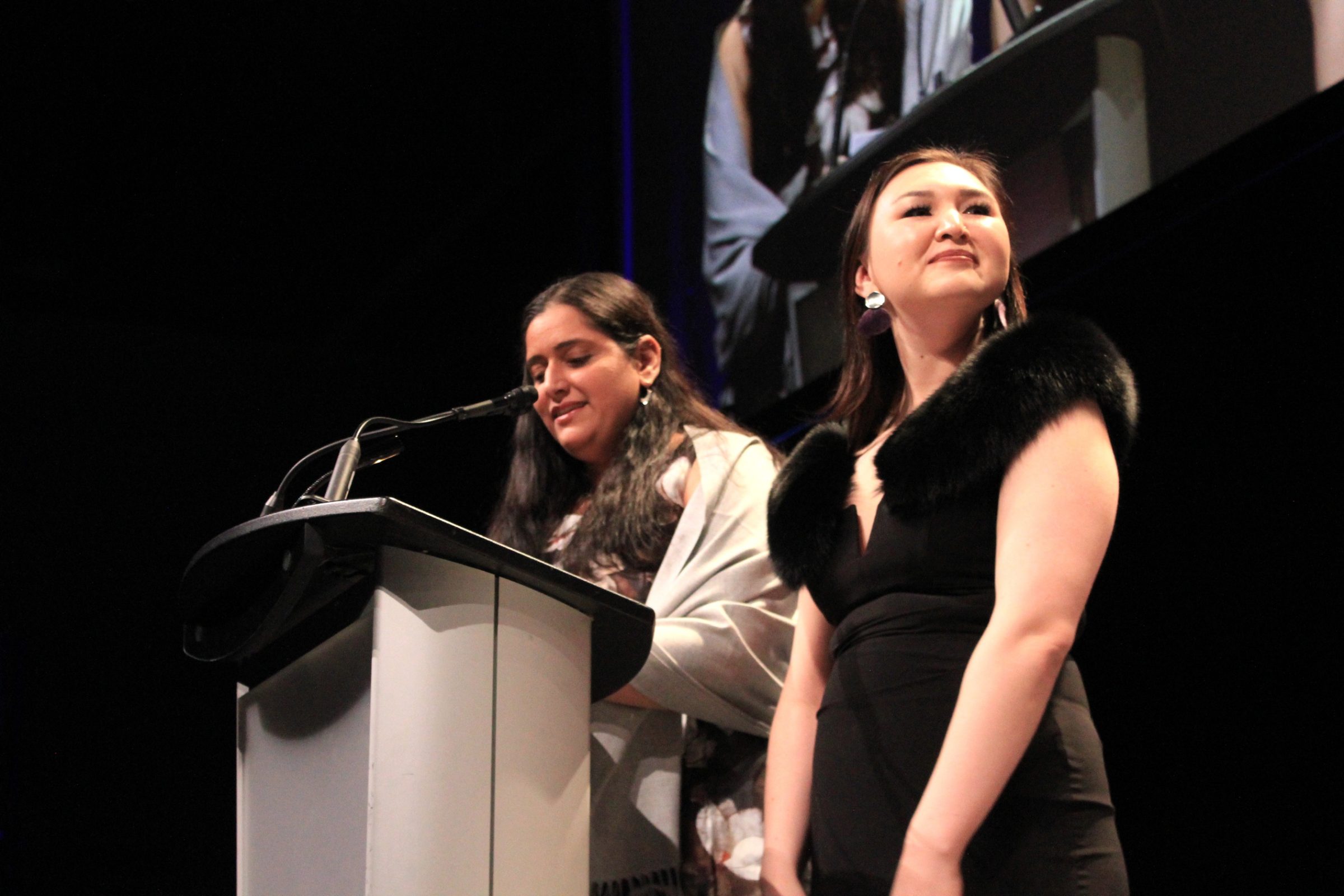 Nuka Olsen-Hakongak, right, and Jessica Shabtai accept their $140,000 Arctic Inspiration Prize for the Nunavut Law Program at a ceremony in Ottawa on Wednesday, Feb. 5. (Photo by Lisa Gregoire)

You’d be hard pressed to find a more vibrant and passionate group of northerners than at Wednesday night’s Arctic Inspiration Awards ceremony in Ottawa. And one thing seems clear after the event: the future is Indigenous.

Eight groups from across Canada’s North—four of them Nunavut specific—took home $2.6 million in prize money at the gala awards ceremony on Feb. 5 that featured Indigenous singers, musicians and, if you count MC Thomas Anguti Johnston’s onstage jigging, dancers too.

This is the third time the group has been an AIP finalist, prompting Rebecca Bisson to remark in her acceptance speech, “we’re not sure if the selection committee just got sick of us but … we’re happy to be here!”

After the Yukon group Resilience Training and Healing Program was awarded their $410,000 prize to help young wildland firefighters deal with mental illness, addiction and suicide in that territory, Economic Development Minister Mélanie Joly took the stage with a surprise announcement that the federal government was adding another $600,000 to support their important work. The audience cheered. 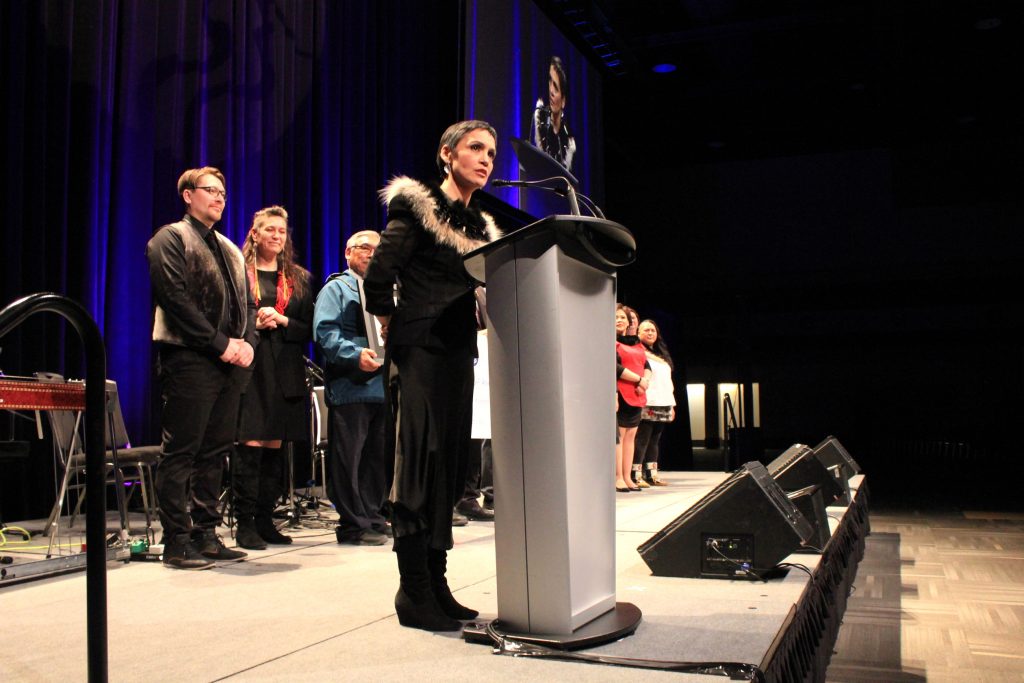 Arviat’s Susan Aglukark accepts a $450,000 cheque from the AIP for her before- and after-school program, Kamajiit, which will help high school kids in three Nunavut communities stay in school and graduate. (Photo by Lisa Gregoire)

If that wasn’t moving enough, Susan Aglukark’s speech had everyone in tears, including herself, when she thanked her mother in the crowd for “bearing the burden of change,” as so many Inuit of her generation were required to do.

Aglukark’s project, Kamajiit, was awarded $450,000 to fund a before- and after-school art and creativity program in three Nunavut communities as part of a program to keep kids in school and graduating.

The show began after a two-hour meet-and-greet where sequinned women and suited men munched on ribs, Arctic char tartare and some of the best cheese this side of Quebec.

While the AIP does have a youth-specific category, all eight of this year’s winning projects target youth, in areas of education and training, employment, post-secondary support, mental health, addiction and traditional skills development.

This focus is likely welcome news in Canada’s north, where high suicide rates, low graduation rates and other troubling statistics related to addiction, trauma and mental health all conspire to keep youth from living healthy, meaningful lives. This is especially true in small communities where there are limited recreation programs, job opportunities and social workers.

Nunavut’s Karen Aglukark, niece to fellow award recipient Susan Aglukark, was a co-leader in the Northern Compass bid. She said earlier this week that Northern Compass hopes to turn the tide on northern youth underachievement and despair by creating a culture of success in post-secondary education.

An offshoot of Northern Youth Abroad, of which Karen is an alumnus and former board member, Northern Compass will offer extensive support for northern youth interested in post-secondary studies—from figuring out where to go, to applying for money, finding a place to live and combatting homesickness, culture shock and potential setbacks.

Some kids will need a little support and some will need a lot, she said. Whatever the case, Northern Compass will serve as education specialists, steering youth toward the help they need, when they need it, with coaches and mentors across the country.

“We’re scrappy. We tell our kids they have to answer our phone calls because we have to make sure they get their applications in on time. It’s a balance between them knowing we always have their backs and the expectation that they fully participate in the relationship,” said Aglukark, who’s working on her second undergraduate degree at the University of Ottawa and hopes to become a clinical psychologist.

This atmosphere of support and mentorship Karen Aglukark speaks of is similar to what she enjoyed growing up. Auntie Susan wasn’t the only role model in the family.

“We had family members who had accomplished so much, so it always felt like a possibility,” Aglukark said. “Sometimes it’s hard to imagine ourselves achieving big goals we set for ourselves, but when the people around us are doing that, we can envision it for ourselves.

“If we create a culture of success in post-secondary, and career development for kids in Nunavut and the N.W.T., and we make it the norm that you can do whatever you want, then we’ll shift the tide. That’s our vision.” 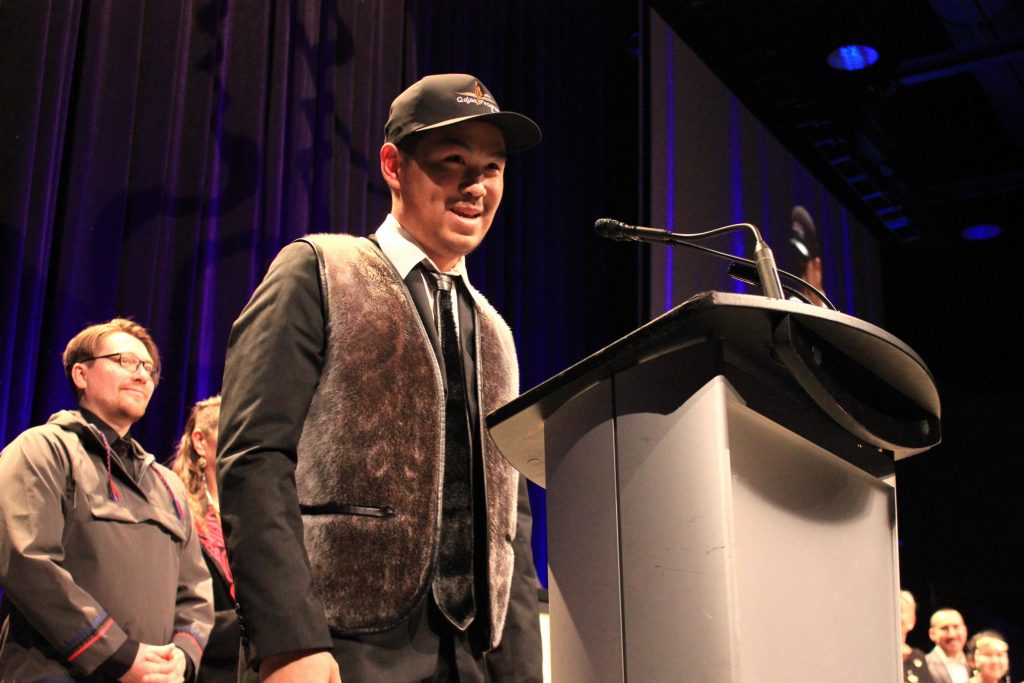 Pangnirtung’s shy but brave Nathan Maniapik, 18, with a sealskin vest overtop his suit, accepts a $100,000 AIP youth prize on behalf of the Trades of Tradition team. (Photo by Lisa Gregoire)

The twin success of aunt and niece isn’t the only coincidental overlap among this year’s AIP winners.

A teenager who was successful in the youth category this year created his hunting skills program—and then applied for AIP prize money—with guidance from Northern Youth in Service, an offshoot of Northern Youth Abroad.

Pangnirtung’s Nathan Maniapik, 18, who hopes to graduate from high school this spring, attended the NYiS program in Ottawa last fall and teamed up with other participants to create a five-community AIP proposal called Trades of Tradition.

Trades of Tradition will pair youth with elders, Rangers, drummers and seamstresses so they can learn traditional skills. Their $100,000 prize money will be split equally among programs in Pangnirtung, Baker Lake, Fort Providence, Igloolik and Whale Cove.

Maniapik said earlier this week that many youth in Pangnirtung don’t know how fun and meaningful it can be to spend time camping and harvesting with family because they lack the means, expertise and opportunity to do so. Even if you go hunting and come back empty-handed, it’s still good for body and mind to be out on the land, he said, and he wants other youth to experience that.

“I think it will help people who aren’t feeling themselves. They can see the land and just be happy, be around people, be able to talk with another person, have something to do, listen to the elders. It will be nice for them to have a breather,” he said. 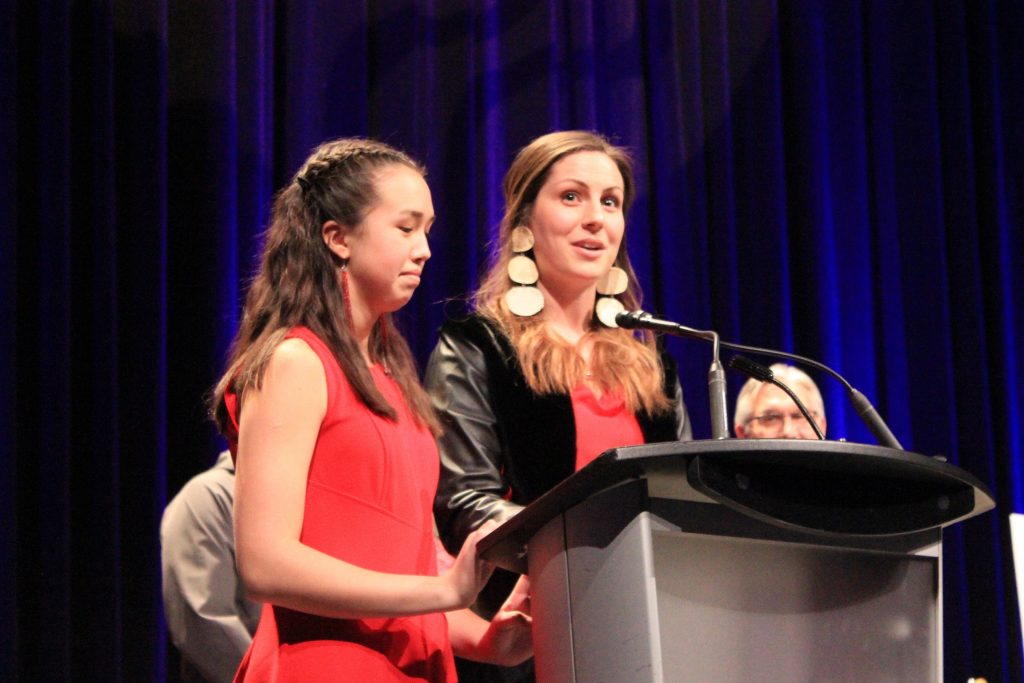 Another Nunavut youth program which picked up a $100,000 AIP cheque Wednesday night was the Baffin Youth Outdoor Education Project, led by Iqaluit’s Brittany Masson. The program hopes to teach land skills to Baffin youth and to encourage them to turn those skills into tourism jobs, such as guiding and outfitting.

The program will culminate in a group dog team journey from Iqaluit to Kimmirut.

Outdoor education offers opportunities to reconnect youth with elders and other traditional knowledge keepers, Masson said. But it’s more than that.

“It’s to create well-rounded youth and to provide them with opportunities to bring them onto the land and outdoors, to be active and be in a team-building environment. That social skill and that community element help with mental health and wellness,” she said.

The final Nunavut-specific award winner of the night was the Iqaluit-based Nunavut Law Program, led by Stephen Mansell and Aaju Peter. The existing program will get a $140,000 AIP boost to provide graduates with professional learning opportunities and a strong foundation in Inuit traditional law through a circumpolar exchange with the University of Lapland.

The AIP is Canada’s largest Arctic-focused prize and is given out to multiple groups annually to facilitate and celebrate some of the North’s most inspiring programs and initiatives.

For more information on the AIP and its foundation, including a list of 2019 winners, visit www.arcticinspirationprize.ca.