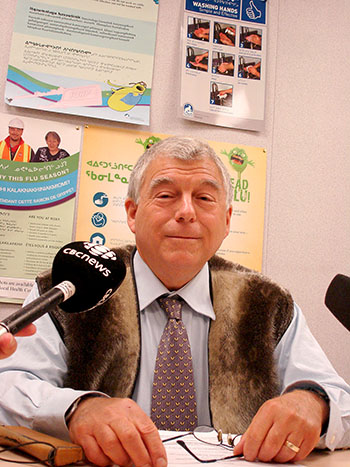 Dr. Isaac Sobol, Nunavut’s chief medical officer of health, at a press conference in Iqaluit held July 20. Sobol said a young woman from the Kivalliq region of Nunavut, who died July 15 due to complications from swine flu, was pregnant. (PHOTO BY JANE GEORGE)

“While it is not unexpected that Nunavut would experience some deaths as a result of the H1N1 outbreak, the impact of this is felt throughout the region and our territory,” Sobol said.

The deceased woman was pregnant, Sobol later confirmed at a July 20 news conference in Iqaluit, where he expressed his “sincere sympathy” for the woman’s family.

Sobol would not release more details about the woman’s age, where she had been hospitalized, or her community of residence.

However, Sobol said the woman’s family had asked him to reveal that she was pregnant to alert Nunavut about the potential seriousness of swine flu for pregnant women.

The woman had been in critical condition for several weeks and had been hospitalized June 24.

Sobol said people who suffer from chronic conditions like diabetes, cancer, heart or lung conditions and pregnant women are considered to be at a higher risk of serious complications if they contract the H1N1 virus.

As of July 15, the GN had recorded 405 lab-confirmed cases of swine flu. Forty of those people have been hospitalized.

But the GN is no longer testing every case of suspected swine flu. The World Health Organization has recommended that public health efforts should be put towards prevention, not reporting, Sobol said.

So and, as a result, the GN’s actual numbers likely don’t reveal the swine flu’s spread in Nunavut, he said.

And even the hospitalization numbers don’t reflect the reality of how many Nunavummiut are seriously ill with swine flu because some patients are hospitalized only when they require 24-hour care, which can’t be provided in local health clinics.

Sobol acknowledged July 20 that several health clinics in Nunavut are accepting only emergency cases because health workers are overloaded with swine flu cases.

The average age of those who fall with swine flu in Nunavut is nine, 10 years less than elsewhere in Canada.

“All of us are at risk,” Sobol said. “Do whatever you have to protect yourself and your family.”

Symptoms of swine flu infections can include:

Sobol’s advice to Nunavummiut who feel ill is to stay at home and call the local health centre, particularly if they suffer from a chronic illness or are pregnant.

Asked about the wisdom of staying in an overcrowded dwelling, Sobol replied that at present there there are no alternatives for Nunavummiut who have swine flu other than to stay at home.

He advised anyone who is sick or caring for a sick person to wear a mask, keep commonly used surfaces like doorknobs clean and not to share items like towels.

The young woman who died July 15 represents the second Nunavut death associated with the H1N1 virus.

On June 30, a woman recognized as a resident of both Nunavut and Alberta died in an Edmonton hospital after developing an H1N1 infection.