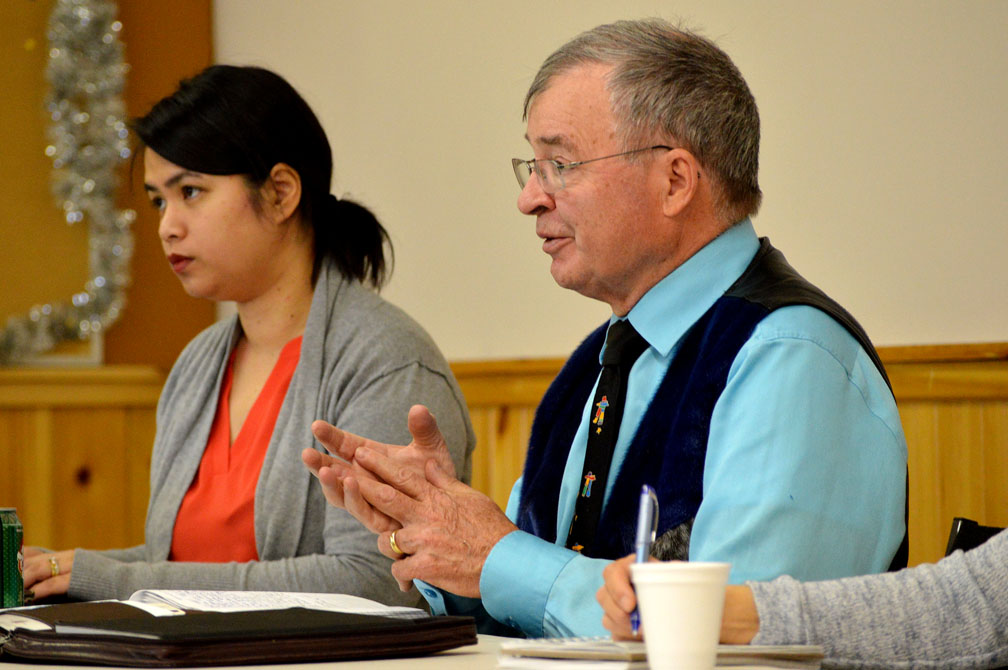 As fresh uncertainty looms over the feasibility of Ottawa’s July 1 deadline for the legalization of cannabis in Canada, Nunavut Senator Dennis Patterson doubled-down at a meeting in Iqaluit on Sunday, stressing that Canada’s Senate will not give Bill C-45 a rubber-stamp.

“I don’t think we’re going to be rushing this bill,” Patterson said at the latest leg of his cross-Nunavut consultation tour, on Sunday, Feb. 11 at the Roman Catholic Parish Hall in Iqaluit.

“The Senate is not bound by any timeline.”

Patterson and the rest of the Conservative caucus in the Senate have already prolonged debate over C-45 with increased scrutiny of the bill, which passed from the House of Commons to the Red Chamber for debate last November.

Bill C-45, or the Cannabis Act, will legalize the sale and possession of recreational cannabis and was supposed to come into effect on July 1, 2018.

But the federal government has left the question of how cannabis will be sold, distributed and regulated to the provinces and territories.

Some of those jurisdictions, including Nunavut, say the July 1 deadline is unrealistic.

Patterson said during his meeting that he’s keeping an “open mind” on the legalization of cannabis.

But he criticized Ottawa for its lack of consultation with designated representatives for Nunavut Inuit, like Nunavut Tunngavik Inc.

The senator noted that participants at earlier consultations in Kimmirut and Cape Dorset were “shocked” that the bill is being rolled out without regard for the absence of an addictions treatment centre in Nunavut.

The lack of an addictions treatment centre was “clearly a very strong theme” so far during the first two meetings, Patterson said, adding, “we’re behind every province and territory” when it comes to addictions support.

And despite a strong divide between older and younger generations on the benefits of legalizing cannabis, Patterson acknowledged that marijuana use in the territory is “widespread” and support for recreational use of the drug is strong.

But Patterson argued that Bill C-45, as currently drafted, goes beyond simply decriminalizing the substance for adult users.

It also includes fines for minors found in possession of five grams or less of cannabis, in lieu of criminal prosecution.

Patterson said that many participants at the Kimmirut meeting were concerned this was too lax.

Mayors who met the senator during a Nunavut Association of Municipalities last year also complained about a lack of consultation from the federal government over the proposed changes.

Some of the half-dozen participants at the Iqaluit meeting also raised concerns over Bill C-45’s legalization of home cultivation.

The law allows people to grow up to four cannabis plants per household, although the territorial government could introduce stricter rules.

A former corrections officer at the meeting warned that growing cannabis plants at home could contribute to an increase of mould within residences, and put a further burden on landlords through the resulting repair costs, while contributing to Nunavut’s housing crisis.

One solution, they suggested, could be the physical sale of cannabis at a dispensary, which would make purchases through a store more convenient for users than growing cannabis inside their residence.

Patterson also took time at the meeting to attack the federal government for its implementation of carbon pricing, which is set to create surcharges, beginning in 2018, of $10 per tonne of carbon, increasing to $50 per carbon by 2022.

Patterson said Ottawa promised the Government of Nunavut, under former Premier Peter Taptuna, that the territory would get a special exemption under the new surcharges—but that has yet to materialize.

A carbon price is intended to provide an economic incentive for people to move away from burning fossil fuels and towards alternative energy.

But no alternative energy sources are available in Nunavut, Patterson said.

“We’ve got to carve out a better plan for Nunavut, Patterson said, adding that he was assured by the federal environment minister, Catherine McKenna, “not to worry,” during a recent meeting in Ottawa.

Patterson is currently on a 25-community tour of Nunavut consulting with his constituents over federal policies affecting the North.

While the upcoming Cannabis Act is expected to attract the most attention at these meetings, Patterson is encouraging Nunavummiut to speak out on any issue of concern.

For more details on Patterson’s tour, you find a more detailed schedule here.