Another Nunavut MLA calls for increase to polar bear quota 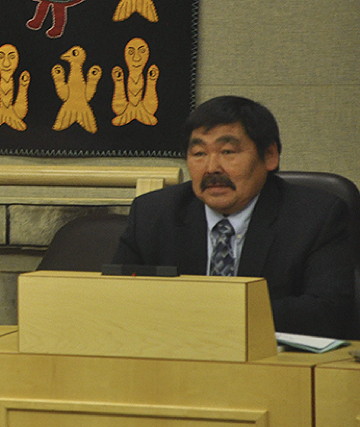 Communities in Nunavut’s Aivilik riding, Repulse Bay and Coral Harbour, are inundated by too many polar bears, but scientists don’t believe their traditional knowledge — Inuit Qaujimajatuqangit — when it comes to managing polar bears, MLA Steve Mapsalak told the legislative assembly in Iqaluit.

“The HTOs [hunting and trapping organizations] as well as hunters in our communities require more assistance to prove their observations and to have scientists put more faith in Inuit concerns about polar bear overpopulation, and not to simply fight any quota increase requests,” said Mapsalak, who made the comments during his member’s statement Oct. 29

The Aivilik MLA acknowledged the issue of polar bear quotas sparks debate among many Nunavummiut.

Meanwhile, hunters in his riding say they have seen a drastic decline in caribou, Mapsalak said. They think the caribou are being scared off by too many polar bears.

According to IQ, overpopulation of any species should result in efforts to decrease the population to a manageable level, he said.

But instead, “it seems scientists pick and choose from traditional knowledge as they don’t seem to believe in Inuit Qaujimajatuqangit.”

Hunting quotas for polar bears in the Foxe Basin, which spans 1.1-million square kilometres encompassing seven communities in Nunavut (including the Aivilik constituency) and four in Quebec, have been exceeded in recent years because of nuisance bears being killed.

This has resulted in a moratorium for some communities, although the annual harvest quota for the sub-population remains at 106.

The Nunavut Wildlife Management Board held a meeting last year, in part to discuss the quota for the Foxe Basin polar bear population.

But a letter signed in August by the NWMB indicated that the GN’s environment department had rejected the board’s quota recommendation and that the GN would make a decision regarding the Foxe Basin quota by mid-September, Mapsalak said in the legislature.

“Can the [environment] minister indicate if he has received a decision concerning the total allowable harvest?” Mapsalak asked Johnny Mike during the question period.

“I will take the question as notice,” Mike replied.

MLA Joe Savikataaq, representing the riding of Arviat South, just south of Aivilk along the southwest coast of Hudson Bay, called for an increase to the polar bear quota in March, and again last week in the legislature, but was told by Mike not to expect a decision until 2015.

Arviat has seen a high number of nuisance bears both in the summer and fall this year, prompting the community to move Halloween indoors.