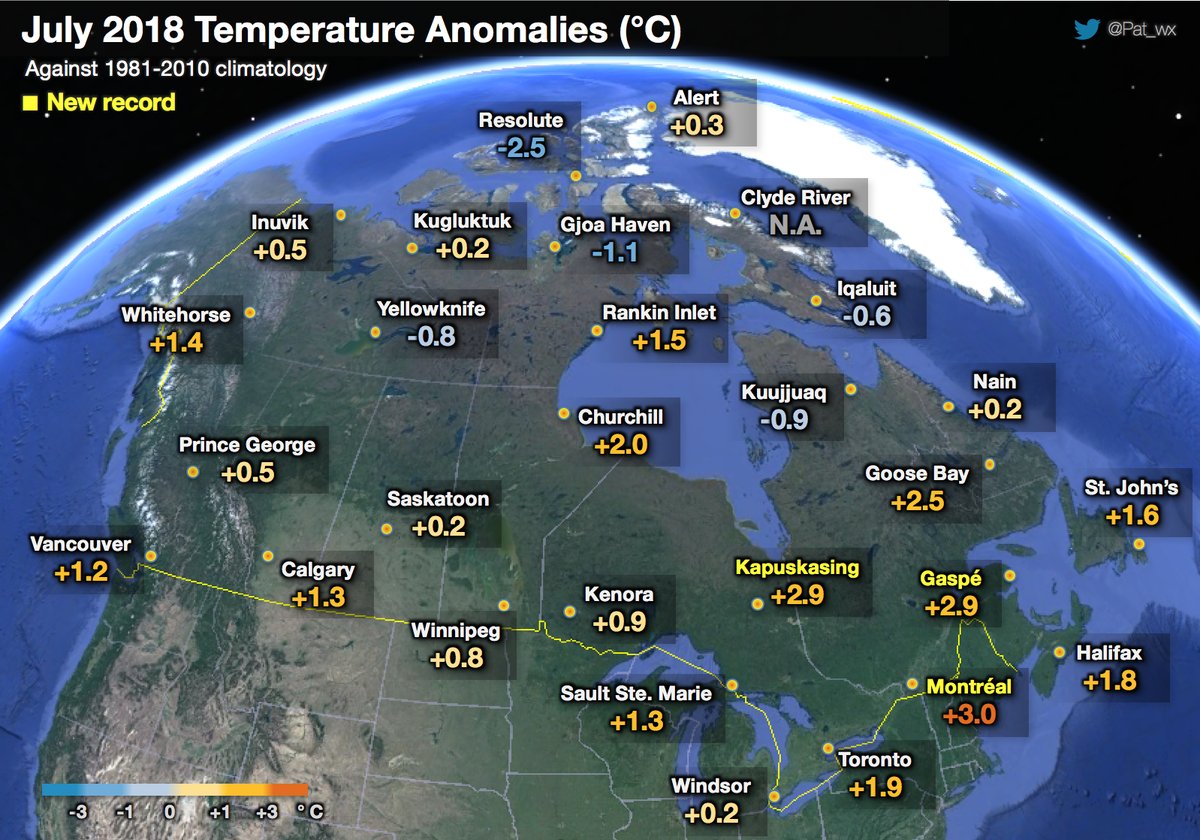 On this map prepared by Dalhousie University weather watcher Patrick Duplessis, you can see the changes to the normal July temperatures that were experienced across Canada. For example, in Rankin Inlet, the month’s temperatures were 1.5 C higher than usual, while in Iqaluit they were 0.6 C lower than the norm. (IMAGE COURTESY OF PATRICK DUPLESSIS)

Record-breaking extremes have marked the summer weather of 2018 in the Arctic: July’s varied conditions left some northern residents scrambling for ways to escape the heat and others looking for shovels to clear new snow off their steps.

In many parts of the Arctic where the heat was on in July, the month brought many scorching days, with highs into the mid-thirties and balmy nights of more than 20 C.

After a sluggish start to the summer in central Nunavut, daytime temperatures in July regularly reached into the twenties or above.

July 10 set new record-breaking high temperatures in a few locations in Nunavut’s Kivalliq region, such as in Baker Lake, where the high hit 30 C that day, prompting residents to stream down to the lake for a dip.

Chesterfield Inlet saw the hottest July 11 on record, with a high of 30 C, breaking the previous record high for that day of 29.4 C in 1964. It was also the community’s first day recorded above 30 C since 1989.

The warmth also brought new critters to the western Hudson Bay community of Arviat, where the end of the month swept in with a wave of temperatures in the high twenties for several days.

Gordy Kidlapik of Arviat said the heat brought hordes of flies into town, as well as a new kind of flying insect, “sort of reddish, with light green wings and head.”

Fresh meat, fish and maktaaq blubber from beluga whales spoil in hot weather, he said. Kidlapik recommends storing fish and maktaaq in open containers, rather than plastic bags, and “when possible, rush home to cut up and store.”

When Kidlapik got home late from whale hunting, he tried to cover all his containers with plywood in case it rained and to protect them from seagulls and the morning sun.

To ensure there was no waste in hot weather, some also announced portions of their hunt for free pick-up, he said.

Meanwhile, in Iqaluit, July temperatures were below normal, according to Dalhousie University weather watcher Patrick Duplessis, who produced a map showing the anomalies or differences from the norm across Canada’s North.

Iqaluit never really warmed up. Its July 17 high of 5.2 C was Iqaluit’s coldest temperature on record for that date, lower than the previous low of 5.4 C recorded in 1978.

And it never topped 20 C through all of July.

But if you lived in the High Arctic community of Resolute Bay, you witnessed the snowiest July since 1967: July 27 brought 11.8 cm of snow, also making it the snowiest month of 2018 to date, Duplessis said.

Temperature records were also broken. The July 23 high of 0.9 C in Resolute Bay, where records have been kept since 1948, was the coldest on record for the date, beating the previous record low of 1.1 C in 1954.

Snow also fell in other communities in north Baffin.

Living in the Arctic you come to expect this sort of thing. Even in July. pic.twitter.com/pnGuwIR8M3

While it’s too soon to gauge the long-term impacts of the chill, some in the Baffin region have noted the lack of berries and also of certain birds, like gulls, and the capelin they feast on.

July was also cool in Greenland and Iceland.

But, further across the circumpolar world, in Arctic Sweden, Finland and Norway, July temperatures were five degrees warmer than the average, often rising into the mid-30s. Reindeers hid in tunnels to cool off and some shook off their shyness to mix in the water with swimmers in bikinis near Rovaniemi, Finland.

To the north, in Kirkenes, Norway, home to about 3,500 residents, and located at about the same latitude as Nunavut’s Qikiqtarjuaq or Clyde River, people headed out into the streets for relief from the 30-plus C heat and evening temperatures above 20 C.

“I think maybe the summer 2018 will be remembered as the ‘turning-point’ for the last climate change deniers here in Norway,” Barents Observer editor Thomas Nilsen observed about the heat experienced there in July.

In 2017, the annual average Arctic air temperatures already continued to increase at twice the rate of the rest of the world, the National Oceanic and Atmospheric Administration report on the climate said last week.

Some climate scientists have also recently repeated their concerns that there’s a connection between increasing Arctic warmth and the weakening of the jet stream and its powerful air currents that regulate the flow of cool and warm air across the planet. This could also be responsible for the high temperatures in southern Canada, such as in Montreal, where July temperatures were 3 C above normal, and in Europe, which has seen temperatures skyrocketing into the forties.

At the same time, the Arctic’s ice loss was rapid in July, according to the National Snow and Ice Data Centre, which tracks Arctic ice extent with satellites. As a result, by July 31, the daily ice cover came in at the fourth lowest in the satellite record, just below the extent seen last year at this time, and just above that seen in 2007, 2011, and 2012. 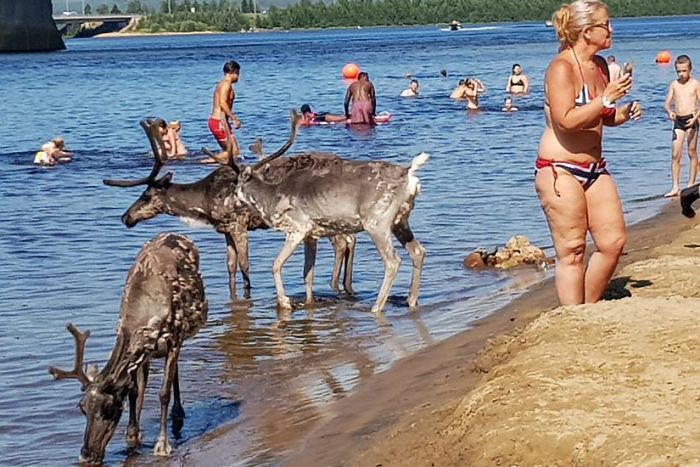 On July 20 in Rovaniemi, Finland, reindeer share the cool river waters with swimmers as the temperatures surpass 30 C. This photo, snapped by a passerby, became widely circulated, as an image of the unusually hot northern weather. (PHOTO BY PEKKA NIINIVAARA/FACEBOOK)