Canada-Denmark agree on boundary between Ellesmere and Greenland 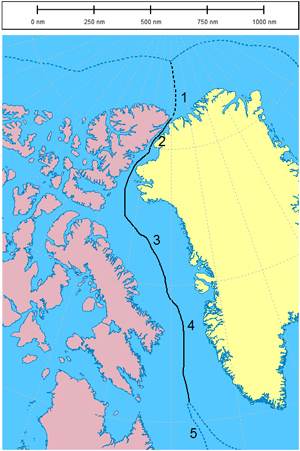 The ownership of Hans Island, a disputed 1.3 square-kilometre rock between Ellesmere Island and Greenland, remains unsettled, even after Foreign Affairs Minister John Baird, Nunavut MP Leona Aglukkaq, who is also minister of the Arctic Council for Canada, and Villy Søvndal, the Danish minister for Foreign Affairs of the Kingdom of Denmark, met Nov. 28 in Ottawa.

But the ministers did come out of their talks to announce they had reached an agreement on where to establish the maritime boundary in the Lincoln Sea, the body of water north of Ellesmere Island and Greenland, they said.

“Our government is pleased with the progress made on the Lincoln Sea boundary,” said Baird in a Nov. 28 news release. “Today’s tentative agreement lessens uncertainty and strengthens Canada’s sovereignty over the Arctic.”

In later negotiations, the two countries agreed that the boundary in the Lincoln Sea should be a line at an equal distance from the shorelines of Canada and Greenland — but they disagreed on some technical aspects of how the line should be determined.

“With the passage of time, these differences have faded,” noted the news release.

“Seeking to resolve boundary issues is a priority for both our countries and is articulated in our respective Arctic strategies,” said Søvndal. “This significant step forward exemplifies the cooperative approach endorsed by Arctic Ocean coastal states in the Ilulissat Declaration of May 28, 2008.”

But tentative agreement announced Nov. 28 did not address the issue of sovereignty over Hans Island.

“That issue is the subject of continuing discussion intended to arrive at a mutually satisfactory solution,” the news release said.

Once the treaty is ratified, Canada and Denmark will share a boundary that is more than 1,600 nautical miles long.