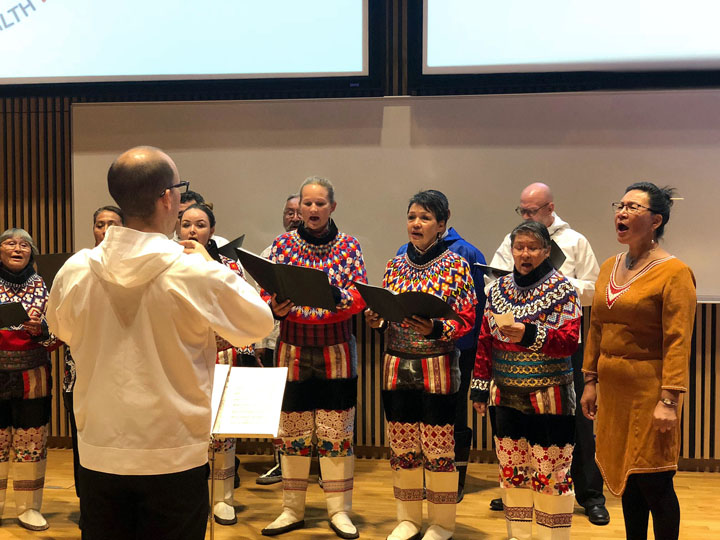 A Greenlandic choir helps open the International Congress on Circumpolar Health in Copenhagen Aug. 12, before an audience of health care providers and researchers from around the Arctic. (PHOTO BY JANE GEORGE) 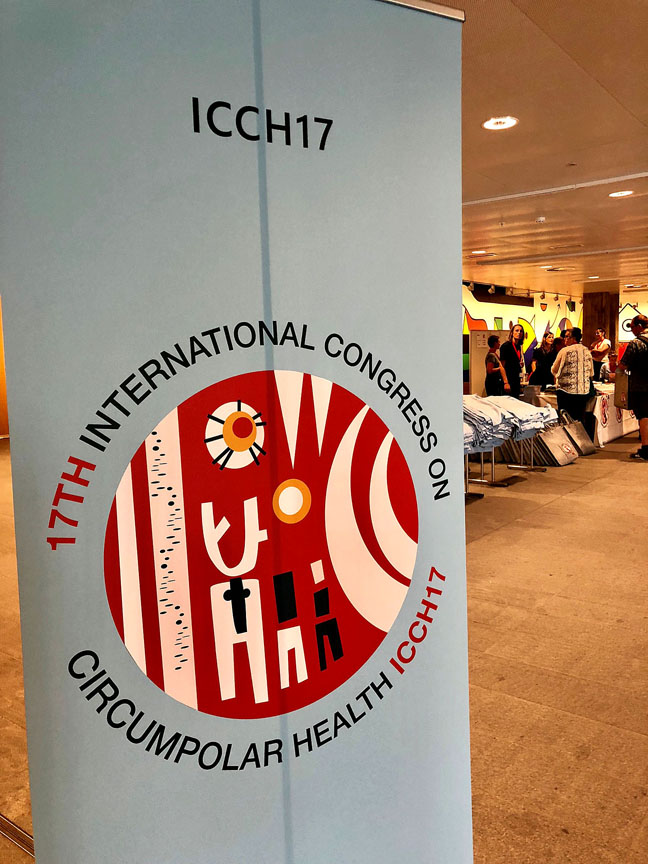 Hundreds of participants are visiting Copenhagen this week to attend the 17th meeting of the International Congress on Circumpolar Health. The next meeting scheduled for St. Petersburg, Russia in three years. (PHOTO BY JANE GEORGE) 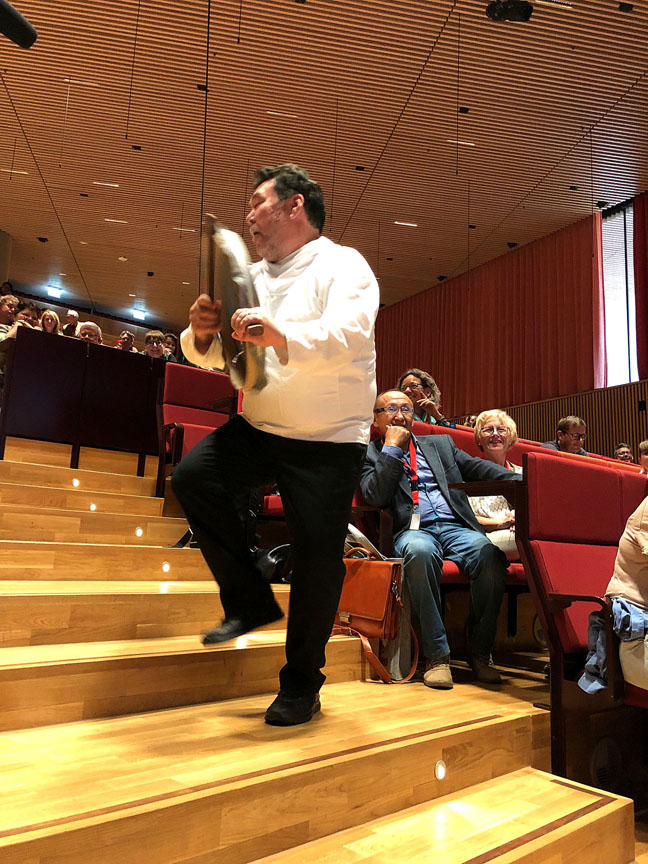 Leif Saandvug Immannelsen performs a Greenlandic drum song at the Aug. 12 opening of the International Congress on Circumpolar Health in Copenhagen. (PHOTO BY JANE GEORGE)

COPENHAGEN—Arctic health care practitioners and researchers are meeting in Copenhagen this week for the 17th International Congress on Circumpolar Health, focused on the shared goal of “Moving Circumpolar Health Forward.”

“We wish to focus on what the future may bring to health of populations in circumpolar areas, and how health of populations in these parts of the world may be improved,” said Dr. Anders Koch, a professor at Greenland’s university, Ilisimatusarfik, and the congress’s president, during his introduction to conference participants, who include many delegates from Canada’s three territories.

The estimated incidence of hepatitis B among Inuit in Canada is about seven times higher than for non-Aboriginal Canadians, but few likely know they have the disease, according to recent research cited during the working group discussions.

And in Nunavut, the diagnosis and treatment of hepatitis—which can lead to liver failure and even death—is crippled by lack of awareness and screening, Brian J. McMahon of the Alaska Native Medical Center told Nunatsiaq News.

As well, Canada has lumped hepatitis with other “sexually transmitted and blood-borne infections” or STBBIs, because you can get hepatitis B from the exchange of blood, semen, vaginal fluids and saliva.

But that doesn’t help spur action directed specifically at hepatitis, participants at the expert meeting said.

The hepatitis B virus can also pass from an infected woman to her baby during pregnancy or childbirth. Those at the meeting discussed efforts to stop this kind of transmission from mother to children through better screening and vaccination.

In Greenland, there’s an active hepatitis B screening effort underway and most babies get vaccinated against hepatitis B right at birth, Karsten Rex, a Greenlandic physician at the Queen Ingrid Hospital in Nuuk, and a member of the hepatitis working group, said at the Aug. 11 discussion.

In Iqaluit, babies do receive vaccinations against hepatitis B.

But if they’re born outside the Nunavut capital, they aren’t likely to receive the series of vaccinations, which offer some lifetime protection against the virus, which, at worst, can cause liver cancer and death.

Other jurisdictions, like Quebec, provide hepatitis B vaccines later to infants and children, a graph shown to the group said.

No one from Nunavut attended the hepatitis meeting.

McMahon suggested to Nunatsiaq News that, due its lack of action on existing hepatitis B infections, Nunavut could be set to fail on its commitment to meet the World Health Organization goal of a 90-per-cent reduction in new hepatitis cases by 2030.

As for hepatitis C, in 2013, the federal government gave money to Pauktuutit, the national Inuit women’s association, to inform Inuit about hepatitis C.

Hepatitis C is transmitted primarily by needle-sharing during intravenous drug use, but also by improperly sterilized tools used for tattooing, acupuncture or electrolysis, as well as improper sterilization of equipment during medical and dental procedures.

It can also be transmitted by sharing personal care items that carry blood, such as nail clippers, toothbrushes and razors.

Transmission rates are also high among people in prisons. The Canadian Aboriginal AIDS Network says it’s not uncommon for Indigenous inmates to enter prison clean, but come out at the end of their sentence with a hepatitis C infection.

About 44 per cent of people in Canada who are infected with the hepatitis C virus don’t know they’re infected, according to a 2015 consensus document published by the Canadian Association for the Study of the Liver.

That because many people don’t show symptoms of hepatitis C infection until after many years, when they develop cirrhosis or liver cancer.

Then there’s the tiny squid-like H. pylori bacterium, which can lead to gastric cancer, also the topic of a circumpolar working group this past weekend.

As many as seven in 10 Nunavummiut could be infected with H. pylori, which thrives in the lining of the stomach.

The 2007 Nunavut Inuit health survey found that more than one-third of men and women tested positive for H. pylori, as did nearly half of all children.

At the expert discussion, participants reviewed the evolution of H. pylori, which can cause a low-level inflammation in the stomach, then irritation, ulcers and, eventually, stomach cancer.

In the Arctic, H. pylori is often a “water-waste issue,” as one researcher on the disease’s circumpolar working group put it, because the bacterium thrives in places with poor hygiene due to a limited source of clean water.

And children need to get treated with antibiotics to get rid of H. pylori because they’re the ones who are most at risk over the long run of developing cancer, the working group heard in a presentation from a group called the Canadian North Helicobacter pylori, or CANHelp, Working Group.

In the Northwest Territories, where CANHelp is active, about 50 per cent of the population in communities like Aklavik tested positive for H. pylori.

There, the rate of infection became big news, and people who tested positive through screening were given a course of antibiotics to treat the infection.

But no communities in Nunavut participate in CANHelp.

Many delegates from Nunavut are attending the ICCH conference, which opened Sunday evening with a talk from the former Nunavut MLA and health minister, Levinia Brown, titled “The era of old and new and changes in Nunavut, from 1940 to present day.”

“There were no doctors and nurses and Inuit looked after each other,” Brown said of those early years, noting that now Nunavut has its own nursing program.

The conference, which runs Monday to Wednesday, features plenary sessions, oral and poster sessions, and workshops, as well as cultural and social events that will touch on such topics as diabetes, genetic conditions, suicide and infectious diseases.

You can find more coverage from ICCH17 later on nunatsiaq.com.