Nunavut’s coding camp gets $1.7 million to scale up 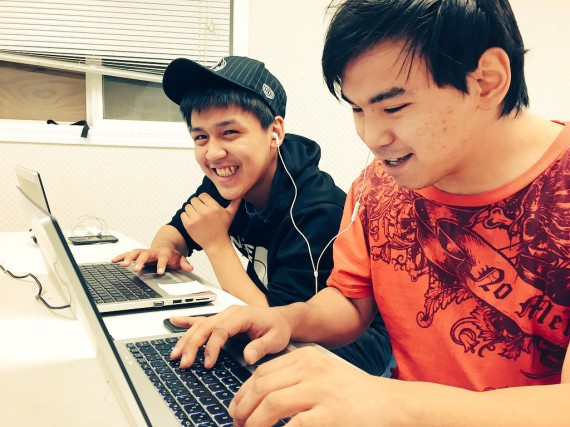 Kevin Karyak and Jasper Pootoogook work during a te(a)ch session in Baker Lake in March 2017. (PHOTO COURTESY OF PINNGUAQ)

Youth in at least 15 Nunavut communities should have the opportunity to learn computer science over the next two years, thanks to $1.7 million in federal funding given to expand the territory’s te(a)ch program.

The Pinnguaq Association, a non-profit that administers the program, says the new money will also help it create 100 lessons tailored to Nunavut residents on topics such as the basics of computer engineering, coding, digital art design, 3D modelling and games development.

This is a big increase in Pinnguaq’s amount of curriculum—at the moment, it has about 10 lessons designed.

As well, a new Inuktitut-language online game is in the works that would teach coding skills.

“There’s no computer science being offered anywhere in the territory, so this is just opening that door,” said Ryan Oliver, the director of Pinnguaq.

Te(a)ch, initially called Code Club, started in 2013 as a week-long coding camp in Pangnirtung, where Oliver lived at the time. The program later went on to teach students in Iqaluit, Baker Lake, Chesterfield Inlet and Arviat.

That’s thanks, in large part, to te(a)ch becoming an Arctic Inspiration Prize laureate in 2016. That distinction came with a $400,000 prize.

Now, with the new federal money, Oliver envisions the program becoming a more long-term, sustainable endeavour, with a much larger number of lessons that are all available online.

“This will allow us to have a site that will exist, and people can take it and run with it, without any one individual’s involvement,” he said.

When te(a)ch visits a community, it starts by spending two days training four to five local residents, typically between 16 and 25 years in age, to help with the instruction. The hope is that these trainers will be able to lead local clubs in their home communities in the future.

Then the program is opened to the public, with the ability to accommodate between 25 and 30 kids. Participants can be anywhere between five and 25, with the typical age being around 10, Oliver said.

As a success story, Oliver points to Talia Metuq, who, as a teenager, took Pangnirtung’s coding camp. During that time, “we partnered with Electronic Arts in Burnaby. And every day we connected via Skype and met the team making their NHL games,” said Oliver.

“Through those meetings she got super into art design. She went to school in Vancouver and was supported by our Vancouver office there.”

Metuq now works full-time for Pinnguaq in Pangnirtung as a curriculum developer.

Lessons are typically geared towards building a game or application. Oliver says participants might, for example, learn how to build a game similar to Guitar Hero, but with throat singing, so that each keystroke creates a different vocalization.

Participants in te(a)ch get a considerable perk: each walks away with a free, refurbished laptop computer, thanks to the Computers for Schools Nunavut program. The computer is pre-loaded with te(a)ch’s curriculum, so students aren’t beholden to Nunavut’s slow and unreliable Internet connections.

“Whenever we go into a community, we can bring enough free laptops for every single participant,” said Oliver. “That means we can leave them with the ability to go through this content in our absence.”

Pinnguaq is also looking at another way to give residents easy access to their materials, called LibraryBox. It would see a local public building host a wireless network connected to a hard drive that contains Pinnguaq’s full curriculum.

“We’d be able to put the whole curriculum online in the community with a localized Wi-Fi signal, for example, every library, or something like that,” said Oliver.

As well as expanding its reach across Nunavut, Pinnguaq is also using the federal funds to bring te(a)ch to seven Cree communities in northern Ontario.

“We’re actually going to be able to take this program to communities like Attawapiskat, Kashechewan, Moose Factory,” said Oliver.