“There was no continuous monitoring… Open flames should always be monitored” 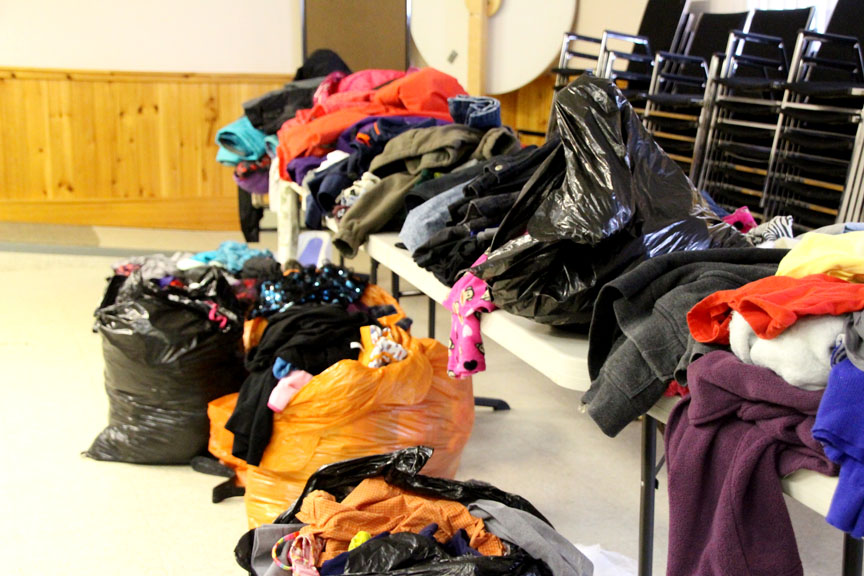 These bags of clothing represent some of the donations gathered for families displaced by the Jan. 1 fire on the Apex Road. The items are being housed at the Roman Catholic parish hall in Iqaluit. (PHOTO BY BETH BROWN) 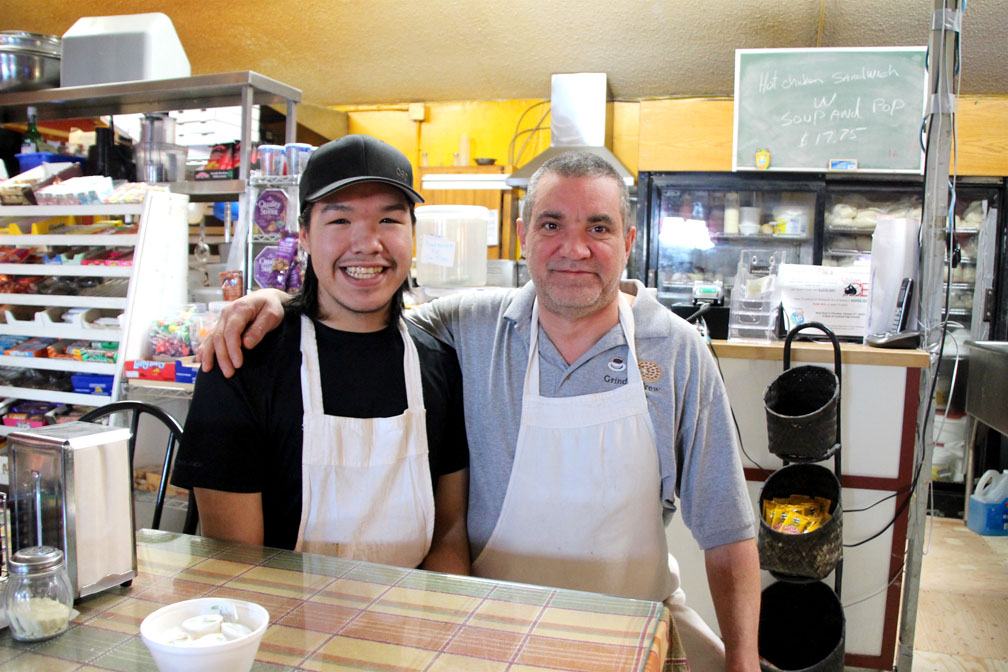 Jamie Natakok (left), and his family lost their home in the Jan. 1 fire that destroyed building 2217 in Iqaluit. Here he stands at the Grind and Brew Café with his coworker Daniel Hillman. The coffee shop put a call out for donations to help families who lost their homes in the first Iqaluit fire of 2018. (PHOTO BY BETH BROWN) 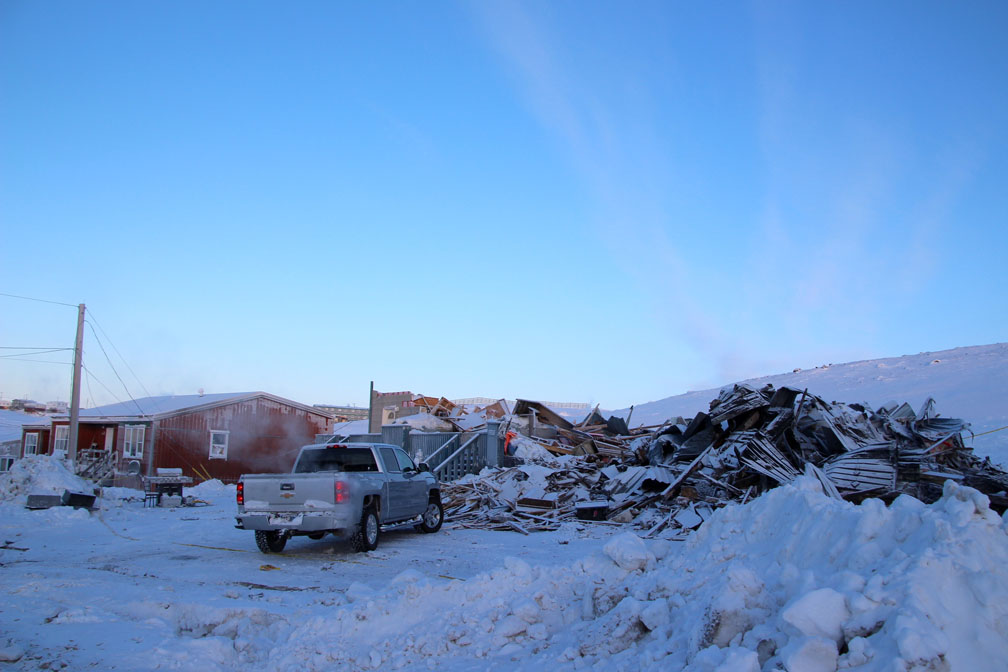 This is all that’s left of the building 2217, as of Jan. 3. The five-unit apartment owned by Northview REIT was destroyed in an overnight fire that started Jan. 1. No one was injured. (PHOTO BY BETH BROWN)

It was a diesel-run heater used to thaw frozen pipes that led to the first Iqaluit fire of 2018.

The City of Iqaluit’s fire department received a call at 10:55 p.m. on Jan. 1 for a fire that would leave building 2217, a five-unit housing complex on Apex Road, in ruins and its residents displaced by the time the flames were fully extinguished at about 9 a.m. on Jan. 2.

Thankfully, no one was harmed and the fire did not damage units on either side of the now-flattened building.

It was resident Gordon Higgins who first detected the fire at its source—a heater set up outdoors with a hose that was forcing warm air into a utility space beneath the floor of Higgins’ unit.

The heater was set up that day to thaw frozen water pipes, after residents told building owner Northview Apartment REIT that the building had no running water.

“I went outside and checked under the house. I saw this orange glow and right away I knew what it was.”

He unplugged the heater and ran to check the crawl space under his apartment, a utility area used to service plumbing for the entire building, where the heating hose was run into.

After tearing away some pieces of pink insulation, Higgins saw just how bad it was.

“Smoke started coming up, and flames. I tried to douse it with the fire extinguisher, but the tiny fire extinguisher that the unit has, that wasn’t going to do nothing. At that point it was already too late.”

In the middle of all this, he had called the fire department and the property manager, and told Atagooyuk to advise their neighbours to get out of the building.

“Everything happened so fast,” he said.

When the fire department arrived, icy pumps and frozen hoses caused by cold temperatures made getting water to the fire a challenge, said deputy fire chief Nelson Johnson, who added, “water doesn’t like to travel when it’s frozen.”

Three fire trucks and two ambulances responded and 22 firefighters fought the flames. The building was flattened in order to quell the fire, Johnson said.

The incident marks the largest fire in Iqaluit since last winter, when a six-plex housing unit in Iqaluit’s Happy Valley neighbourhood was gutted in an overnight fire.

One man suffered from smoke inhalation, but did not need medical attention, Johnson said.

Residents in the adjacent buildings were temporarily relocated for safety reasons.

As for the heater that caused the fire, it was not being properly monitored, Johnson said.

“There was no continuous monitoring… Open flames should always be monitored and maintained and have adequate room for air,” he said.

The fire department is still investigating the incident. Johnson could not yet confirm the dollar value of the lost building

Resident Jamie Natakok said he had been playing a video game when he smelled something burning, but when he couldn’t find the source of the smoke he “shrugged it off,” he said.

A few minutes later there was a knock on the door, from Atagooyuk, alerting the Natakok family of the fire.

Natakok said his grandmother gathered her sewing and his sister made sure to take the family cell phones and “we headed out.”

“It was terrifying and shocking,” he said. “The first night it happened everyone was devastated, but when we heard we had a house, we were pretty excited.”

The Natakok family found out they have a new home on Jan. 3.

After the fire, the family and other displaced residents were staying at the Capital Suites, also owned by Northview Apartment REIT.

Higgins told Nunatsiaq News that shelter is available to families impacted by the fire until Jan. 15 at the Capital Suites.

When Daniel Hillman of the Grind and Brew Café found out that his co-worker, Natakok, had lost his home, he put a call out on Facebook for donations to help families displaced by the fire.

The small café soon had more donations coming in than it could handle, so they found drop-off space at the Roman Catholic parish hall.

Donation times for cash, clothing and household needs were set up at the parish hall on Jan. 2 and Jan. 3.

“We included everyone,” Hillman said. “The city really has a big heart, the donations are really good.”

The Manitoba Red Cross also responded to the emergency by providing immediate help in the form of hygiene kits, blankets, and vouchers for food and clothing.

We are helping 21 people in #Iqaluit, #Nunavut impacted by a multi-unit building fire on Jan. 2. Our volunteer team is providing food, clothing and hygiene kits to the people affected by the fire.

Aliyak, who has contact information for all the families, said there have been lots of clothing donated, but that the need doesn’t stop there.

“What these people really need is just anything to start a home, whether it be towels, blankets, small kitchen appliances, dishes, cutlery, garbage bins, brooms, cleaning supplies, stuff to start up a home again.”

Standing at the parish hall, she noted that one table was looking bereft of household donations because a family had just come by to pick up the items.

“The public is really good at helping out people with tragedy,” she said.

While everyone made it out of the building safe, it was a close call for Higgins’ dog Dakota, who was in a kennel in the porch and was nearly forgotten in the commotion.

Reminded of the dog by Atagooyuk, Higgins barrelled back through the smoke to grab Dakota before it was too late.

Higgins and Atagooyuk are now in Ottawa visiting family while they get re-oriented.

He thanked everyone in Iqaluit for the generosity shown following the fire.

“The support has been phenomenal,” he said, becoming emotional over the phone.

The feeling that comes from the community outpouring beats the heavy heartedness left from losing his home, he said.

“It’s been amazing. I just want to thank everyone. I can’t say thank you enough, I’m glad everyone is safe.”