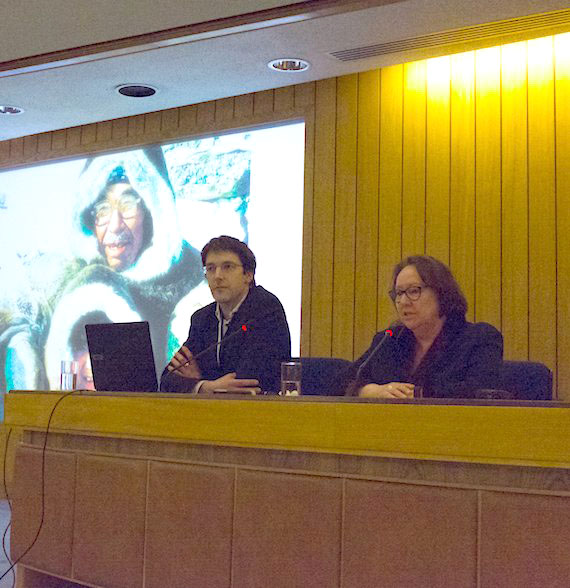 Sheila Watt-Cloutier, right, speaks on Tuesday at an event in London organized by the the Clean Arctic Alliance as a side event at this past week’s meeting of the International Maritime Organization, called the Climate Crisis: A Message from the Arctic. “We are constantly reminded how taking action on greenhouse gas emissions will negatively impact our economy,” Watt-Cloutier said. “I understand this same lame excuse which is a very outdated card to play at this stage with our climate crisis, I would say do not play this card when it comes to banning heavy fuel oil, which has potential to create extreme irreparable damage to our Arctic oceans.” (PHOTO COURTESY OF CLEAN ARCTIC ALLIANCE)

Commercial shipping in the Arctic may be on its way to becoming cleaner, following a decision by the International Maritime Organization to ban heavy fuel oils in the Arctic at some point in the future.

The organization agreed yesterday to ban the fuel, often known as HFO, in the Arctic, but did not set a date for the ban, saying that will depend on an assessment that will be conducted to ensure the ban does not place an unnecessary burden on Arctic communities.

The IMO also agreed to adopt a strategy to cut greenhouse gas emissions produced by ships to 50 per cent of 2008 levels by 2050.

About 75 per cent of the marine fuel currently carried in the Arctic is HFO, and shippers have said the cost of switching to cleaner fuel would be carried by their customers.

The IMO directed a sub-committee to develop a ban on heavy fuel oil use and carriage for use by ships in the Arctic “on the basis of an assessment of the impacts” and “on an appropriate timescale.”

The Clean Arctic Alliance, a coalition of 18 non-governmental organizations working to end HFO use as marine fuel in Arctic waters, which had lobbied hard this past week for the ban, said it “applauded progress by member states” towards banning use of HFO from Arctic shipping.

The alliance called for the IMO’s more than 100 member states to adopt and rapidly implement a ban by 2021, as proposed by eight IMO member states and supported by other countries during this past week’s meeting in London.

Finland, Germany, Iceland, Netherlands, New Zealand, Norway, Sweden and the United States had sponsored the proposal, which called for a full HFO ban by 2021.

“A single HFO spill could have devastating and lasting effects on fragile Arctic marine and coastal environments. In addition, Arctic shipping is projected to continue to rise, thus increasing the risk of a spill. For these reasons, the ban on HFO should be implemented as soon as possible, and any delay in implementation of the HFO ban by eligible ships should be short-lived … The co-sponsors propose that the implementation date of the ban be set for no later than the end of 2021.”

Dr. Sian Prior, the lead advisor to the Clean Arctic Alliance, said in an April 13 release that “a ban is the simplest and most effective way to mitigate the risks of HFO—and now we’re calling on the IMO to ensure that this ban will be in place by 2021. Any impact assessment must inform, but not delay progression towards an Arctic HFO ban, and member states must ensure that Arctic communities are not burdened with any costs associated with such a ban.”

Besides the dangers from an HFO spill, the fuel is also a greater source of harmful emissions of air pollutants, such as sulphur oxide, and particulate matter, including black carbon, or soot, which is a short-term climate forcer.

When emitted and deposited on Arctic snow or ice, the climate warming effect of black carbon is up to five times greater than when emitted at lower latitudes, says a recent report on emissions and fuel use in global shipping.

When the tiny particles of black soot become suspended in the atmosphere, they radiate heat back to the earth.

Researchers have estimated that in the Arctic, black carbon magnifies warming more than in other regions when it falls on ice and snow, magnifying heat like a black T-shirt on a sunny day.

Because of this, black carbon is believed to be responsible for at least 30 per cent of warming in the Arctic.