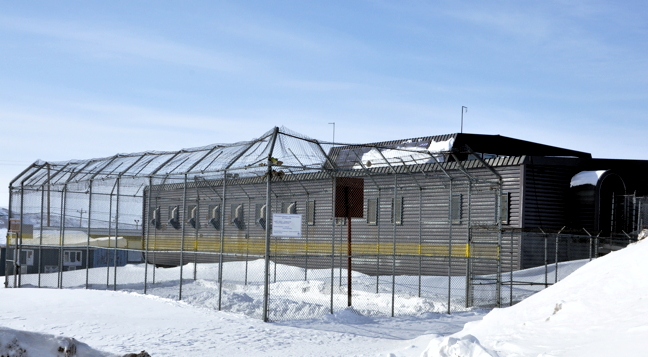 Nunavut police and justice officials say an investigation continues into a riot led by a handful of inmates at Baffin Correctional Centre in Iqaluit last week.

Sometime through the night and early morning of Sept. 25, four inmates at the Iqaluit detention facility are alleged to have caused widespread damage to the prison’s living quarters.

Correctional officials haven’t said what sort of damage was caused that night, only that about 85 per cent of the building’s medium security sleeping area and a third of its maximum security bed space were destroyed in the incident.

The four suspects remain in police custody, and no charges have been laid.

The other roughly 50 inmates incarcerated at the facility have been returned to living units either at the BCC or the nearby Makigiarvik minimum-security facility, officials with Nunavut’s justice department said this week.

“Repairs and security upgrades to prevent similar incidents will continue through the next few weeks.”

Justice officials haven’t said much more about what triggered the Sept. 25 riot.

CBC News reported that BCC inmate Steven Akittirq—the Igloolik man who pleaded guilty to the second-degree murder of a teenage girl earlier this week—was one of the four inmates who took part in the riot, as a protest of sub-standard conditions at the jail.

The 30-year-old detention facility has been the focus of complaints before; it was flagged for “critical deficiencies” by the Auditor General in 2015, including overcrowding, non-compliance with the fire code and a lack of basic security measures.

Work is currently underway on the design of the new 112-bed Qikiqtani Correctional Healing Centre, which is set to replace the BCC and provide additional rehabilitative programming by 2020.