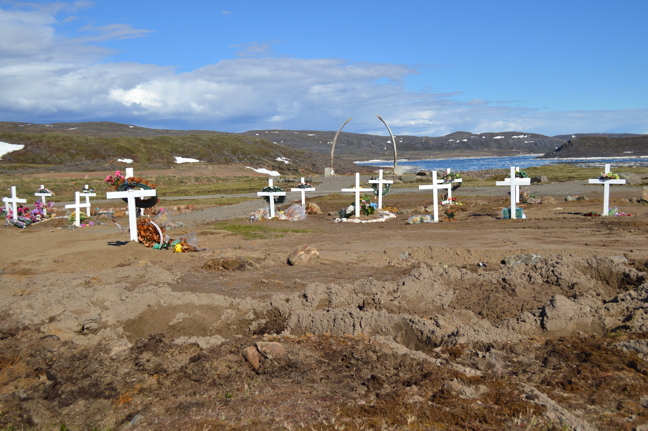 Sometimes open graves in the new cemetery in Apex fill with water, much to the chagrin of mourning families. Iqaluit city councillors plan to revisit the state of the cemetery at an upcoming Engineering and Public Works Committee meeting. (PHOTO BY STEVE DUCHARME) 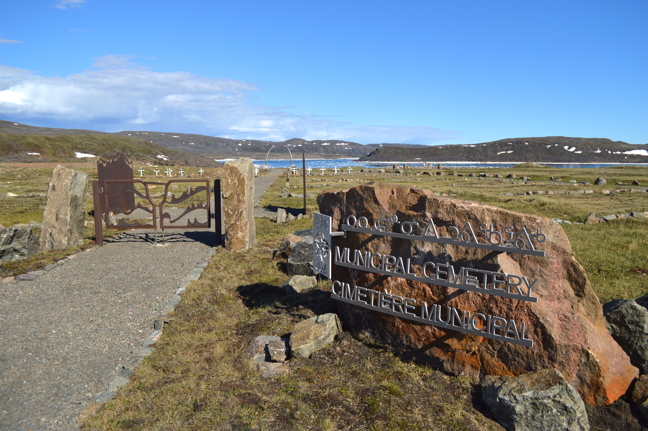 The new municipal cemetery in Apex has a lovely view of Tarr Inlet but suffers from flooding and slumping. (PHOTO BY STEVE DUCHARME)

Iqaluit City Council will revisit the city’s new $1.33-million cemetery in Apex, following complaints about the site that two city councillors made June 28 at a council meeting.

Councillors Megan Pizzo-Lyall and Joanasie Akumalik complained that frequent flooding at the cemetery forces some families to bury loved ones in muddy, water-filled graves.

“I don’t think it’s acceptable. I want the people to know that we’re listening and I feel for them and I would not want to be in the situation they’re in either,” Coun. Pizzo-Lyall said.

“The present situation with the new cemetery is not a single, isolated, concern anymore. It is widespread. People are coming to us,” Coun. Akumalik said.

The city’s public works department currently has workers available for pumping water out of graves prior to funerals, after some Iqaluit residents made similar complaints last summer.

Mayor Madeleine Redfern told Nunatsiaq News in an email June 30 that the issue is slated for discussion at the next Engineering and Public Works Committee meeting.

Directors of the public works and engineering departments may be called upon at that meeting to deliver a joint presentation on the current state of the Apex cemetery.

“The directors will provide council a thorough background of the various cemeteries,” she said, adding the presentation will include the old beachfront cemetery, the Apex cemetery and the now-abandoned cemetery site at the Road to Nowhere.

“[The directors will present] all relevant expert or technical assessments and reports, community consultations and input, costs, past and present implementation issues, mitigation efforts and future plans, if any,” Redfern said.

“I dread whenever I hear someone passed away and that they’re going to have a service here. It happens every time someone dies and they have to get buried in that cemetery,” she said.

Pizzo-Lyall says she will make the Apex cemetery a personal priority at the city’s strategy plan development meetings.

Those meetings are scheduled for August.

City staff will meet at that time to deliberate a comprehensive strategy plan guiding city policy over the remainder of this council’s term.

Iqaluit’s search for a new cemetery site stretches back more than 15 years.

Council decided on the new Apex cemetery site in 2013, replacing a previously chosen site near the Road to Nowhere after workers reported engineering problems, delays and cost overruns.

The Road to Nowhere was partially developed, but never used because the city discovered that the rocky ground in that area severely limited the potential number of available burial plots.

Redfern said it’s a priority to get the city’s current council up to speed on the issue, noting that the long history may be new for many current councillors.

“It’s important that when council reconsiders or revisits an issue that they are provided with sufficient and relevant information to permit an informed exchange and decision-making.”