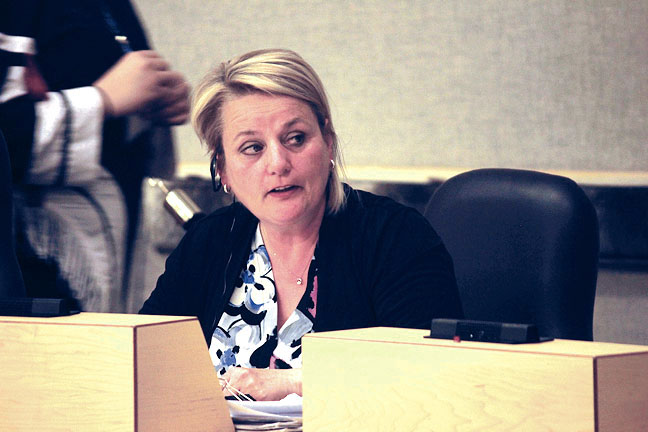 Iqaluit-Niaqunnguu MLA Pat Angnakak, who tabled a motion in the legislature during the last sitting and got support from all MLAs to establish a public service commission in Nunavut, asked the HR minister, Keith Peterson for an update on progress. Peterson said his staff are still looking into it. (FILE PHOTO)

Pat Angnakak, MLA for Iqaluit-Niaqunnguu, took Finance Minister Keith Peterson to task in the legislative assembly in Iqaluit Oct. 24 over the territory’s efforts to establish an independent public service commission.

All regular MLAs voted in June in favour of Angnakak’s motion to recommend the commission, while all cabinet members toed the government’s line and voted against it.

“Can the minister update the House today on the status of the government’s implementation of this recommendation?” Angnakak said during question period Oct. 24.

Peterson did not say whether the government will follow through on the recommendation.

“It is very busy during the summer with people working hard on various things. I can assure Ms. Angnakak that my staff is hard at work on reviewing the public service commission concept,” said Peterson.

Angnakak introduced her motion June 7 during the assembly’s spring sitting after a standing committee of regular MLAs grilled Peterson and other human resources officials over four days.

The Government of Nunavut is failing its public servants and needs to rethink its management of human resources, the motion said.

In the preamble to her next question Oct. 24, Angnakak said the government’s current practice of separating human resource functions between two departments—finance as well as executive and intergovernmental affairs—has resulted in “major issues” including hiring, retention and resolving workplace conflict.

“Why does the government believe that reintegrating these functions under one roof would be the wrong thing to do?” Angnakak asked.

Peterson responded by saying he spent four days testifying before the standing committee on this issue in June, as well as 20 minutes speaking to Angnakak’s motion in the house.

“I can assure the listening public, the MLAs and everybody else that there has been significant progress in improving the human resources side, [for example] increasing the staffing, training and development in Inuit employment,” the minister said.

But Angnakak provided staffing numbers that made it appear the minister might be misinformed.

“Just because somebody talks for 20 minutes doesn’t mean that we are in agreement with what is being said,” Angnakak shot back.

On March 31, 2013, the day before the GN dissolved the standalone human resources department, Angnakak said the government’s overall vacancy rate stood at 23 per cent.

By the government’s latest tally, the rate of unfilled jobs has increased by 5 per cent to 28 per cent, or 1,314 jobs.

“Does the government still believe that the decision to separate its human resources functions into different departments has helped its recruitment and staffing efforts?” Angnakak asked.

Peterson did not answer the question.

“Ms. Angnakak has her opinion. That’s her right. I can assure her that… we treat our GN employees as valued employees. They’re doing a great job for us out there and I hope that will continue.”

Dozens of former and current GN employees have come forward to Nunatsiaq News over the past year with stories of unresolved workplace harassment.

Some of those stories involve serious physical and mental health problems as a result of alleged workplace harassment.

Angnakak’s motion recommended that the GN look to the Yukon for a similar public service commission model.