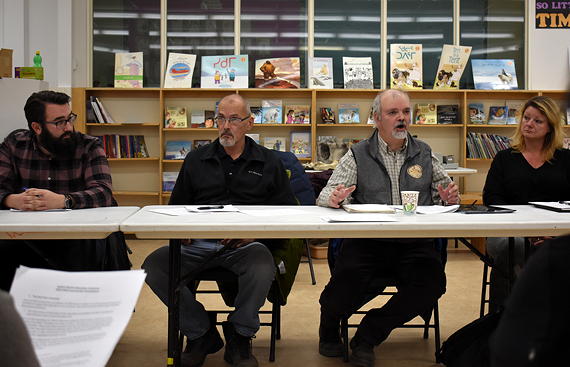 Doug Workman, chair of the Iqaluit District Education Authority, speaks during the organization’s annual general meeting on Monday, Oct. 15. He says Nunavut’s Education Department incorrectly counted the number of students in the city, and as a result, shortchanged Iqaluit’s schools by three teaching staff and gave the DEA a smaller budget than it should have received. (PHOTO BY COURTNEY EDGAR)

The Iqaluit District Education Authority says schools in the city have been shortchanged by the Department of Education this school year because the Government of Nunavut miscalculated the number of students attending class.

This resulted in fewer teachers available per student and a substantial loss in funding for three of four Iqaluit schools.

Education Minister David Joanasie said in a Jan. 2018 letter that the government had calculated there were 1,305.5 students enrolled in the 2017 school year in Iqaluit, and that, as a result, there would be a $43,809 budget for the DEA, a $1,231,656 total enrolment operating budget and a 3.5 per cent increase in teachers this year, for a total of 95 teachers.

However, Doug Workman, chair of the Iqaluit DEA, said at the organization’s annual general meeting on Monday night that these numbers were found to be incorrect, and that there should be at least 98 teaching staff in Iqaluit to maintain the Education Act’s target ratio.

After the DEA disputed the numbers in the January letter, the minister ordered an audit that found the Department of Education had indeed fumbled in its calculation by checking attendance rates much later in the semester.

Since the 1970s, Nunavut schools have measured student attendance on Sept. 30 to determine the Student Educator Ratio, or SER, needs for the following year.

The Iqaluit DEA and the Department of Education found in its audit that the original calculation of 1,305.5 students was off by 44 students in total.

“For the Iqaluit DEA, the difference of 44 students translates to three teaching positions along with a substantial difference in funding,” Workman said.

In the January 2018 letter to the DEA, Joanasie wrote that 95 teaching staff should mean there are 13.8 students for every educator. That would meet the national average that Nunavut aims to exceed, according to the Education Act.

With 1,349 students, however, there should have been 98 teachers to maintain that ratio, mandated in Section 123 in the Education Act. With only 95 teaching staff, the schools have 14.2 students per educator.

The Department of Education’s count for students at Joamie School was the only one close to being accurate. There, the count of 239.5 students was off by only 0.5, which represents one half-day kindergarten student.

With the other schools, the difference in numbers was a bit more noticeable. Aqsarniit Middle School had 16 uncounted students last year when determining the budgets. There was actually 324 students, not 308.

And Nakasuk Elementary School had missed nine students. There was actually 367, not 358.

Additionally, the student population is growing each year, Workman said.

According to the Iqaluit DEA’s numbers for this Sept. 30 attendance count, all of the schools have continued to increase in enrollment.

That’s a total increase of 51.5 students for this 2018-19 school year. The budget for the city’s schools, meanwhile, was based on an incorrect budget that counted 43.5 fewer students than there actually were the year before.

“Our DEA plans to meet with our Iqaluit MLAs to have this scandal brought to light in the legislative assembly,” Workman said.

Workman said a meeting with MLAs was planned for Tuesday, Oct. 16, to discuss the matter.