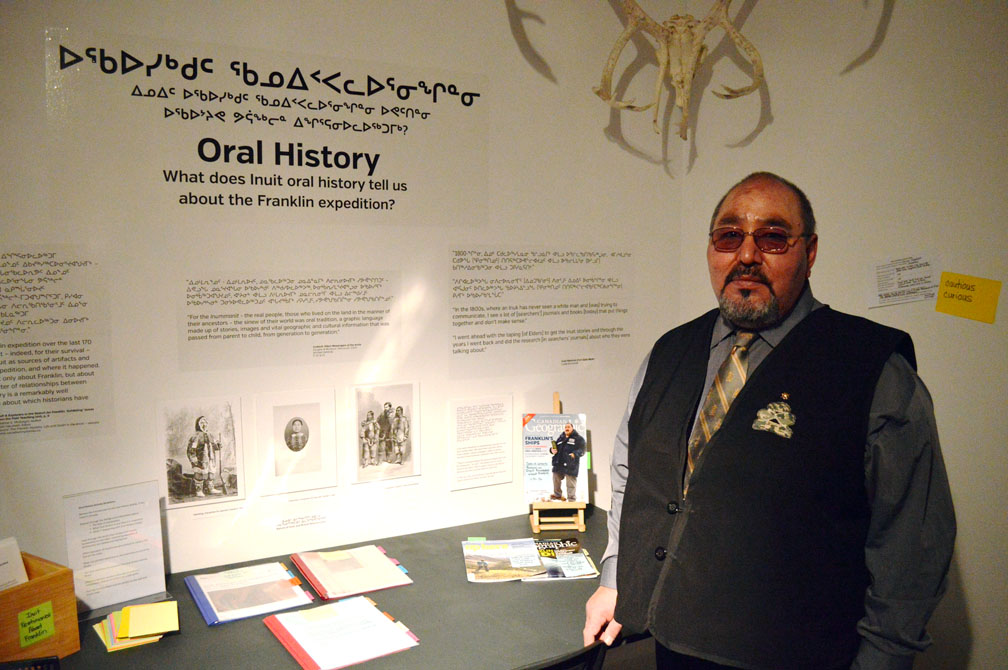 The renowned oral historian Louie Kamookak of Gjoa Haven at the Nunatta Sunakkutaangit Museum in Iqaluit on Jan. 19, 2017, when he gave a talk on Inuit knowledge of the Franklin expedition. He also announced the launch of Grade 8 curriculum materials on the Franklin expedition for use in Nunavut schools. (PHOTO BY STEVE DUCHARME)

In the history of the modern revival of interest in the fate of the Franklin expedition, there’s really only one man whose presence links it all together: Louie Kamookak.

He played a central role for more than three decades in one of Canada’s most enduringly fascinating mysteries: throughout the 1980s and 1990s, he accompanied Franklin searchers such as David C. Woodman, Ernie Coleman, John Harrington and Margaret Bertulli on their searches of King William Island, serving both as a guide and as a wellspring of Inuit traditional knowledge.

He continued in this role in the 2000s, working with Robert Grenier on the very first Parks Canada search in 2008, and consulting with many of those who followed. For all who came to his home in Gjoa Haven, he was a font of information, relaying traditions from his Netsilingmiut ancestors, as well as those passed down from his grandfather, William “Paddy” Gibson, who himself had identified many Franklin sites before his untimely death in 1942.

His work preserving Inuit oral traditions extended far beyond the Franklin story; he was the main contact for the Inuit Heritage Trust’s work on traditional Inuit place names in the region around King William Island (Qikiqtaq,) and he collected numerous oral histories from Gjoa Haven elders. He was just as much at home with younger Inuit, guiding them on expeditions on the land that retraced traditional routes and knowledge.

Still, it was for the Franklin story that he remained best known; in 2014, when news of the discovery of HMS Erebus raced round the world, Louie’s work gained worldwide recognition. At the school, where he worked, the phone started ringing off the hook, leading him to his wry observation that he’d be harder to find if he had a more common name, but “I’m the only Louie Kamookak in the world.”

And now the world has lost him. Born in 1959 in a camp on the Boothia Peninsula, Louie was a member of the last generation to begin life on the land. The transition from those times was not an easy one for many, but Louie found his own way to link past and present.

His boundless curiosity was piqued when his father showed him the remains of “Russian Mike,” a lone fur trader who purportedly had shot his dogs and then himself; Louie noticed several inconsistencies between the legend and the evidence, including the fact that the bullet seemed to have entered through the top of this man’s skull.

Living in a place where history lies so visibly on the ground (for those who know where and how to look,) he was naturally drawn to the Franklin story, and found many occasions while out hunting to seek out traces of the lost expedition.

The bones on the Todd Islets, which had been reburied by his grandfather in the 1930s, were a frequent place of pilgrimage; Louie took numerous parties to see them, although they never received a proper archaeological study until a few years ago.

There are a lot of misunderstandings about his work. Being an exponent of oral tradition, it’s sometimes assumed that he wasn’t as familiar with traditional history; on the contrary, he was an inveterate reader and collector of all things Franklin.

One of his first travelling companions, the book dealer Cameron Treleaven, became a fast friend, and it wasn’t long before Louie had amassed a formidable library. It was, in fact, in the links between that material and the oral tradition that Louie’s most important contributions lay; he made the connections, and again and again pointed latter-day searchers in the right direction.

When, in 2010, the world was abuzz with the story of a box buried under the memorial to Paddy Gibson that was supposed to contain Franklin records, Louie knew that the box’s contents had been removed in the 1980s—he had been present for the occasion—and consisted only of a note and photograph left by Amundsen, not Franklin.

I last saw him in August of 2017, when I brought a party of adventure cruise passengers to Gjoa Haven to hear him give a presentation about the oral histories; we met in the community room at the Amundsen hotel. The projector we’d booked for his presentation didn’t work; he walked back to the school and brought another, but we still couldn’t get it to work with his slides.

No matter: he’d brought with him an older technology, one that didn’t need to be plugged in: a map. Using just that map, he held his audience spellbound with an impromptu account of all the key Franklin sites, conveying these histories in the same way he had heard them growing up, solely by word of mouth.

Afterward, he and his wife Josephine joined us for lunch, and we chatted amiably about this year’s work on the Erebus by Parks Canada. Louie spoke proudly about the selection of local people as the Inuit guardians of the wreck, and told me he was hoping to visit it again later that summer.

Louie had many plans; in addition to a return to the north of King William to look for the vaults described in Inuit testimony, he was working on a paper about signs of climate change in the North. He had noticed that the Lapland longspur, whose distinctive song was such a familiar one, had stopped singing; he believed that these same changes were connected to an increase of cancer among Inuit.

Louie kept fairly quiet about his own diagnosis, though from his check-ins on Facebook you could see he had made several trips down south to receive care. His own posts, as always, were all about family and friends, and every morning all of us who knew him answered to his ready Ublaakut!

The one thing that Louie was devoted to more than the Franklin story was his family: his wife Josephine and their children, grandchildren, nephews and nieces always took precedence. On March 14, scarcely two weeks ago, he posted a rare comment on his illness, which was only to mention that he’d had a good night’s sleep after chemo, “another blessing from the Lord.”

Throughout his illness, as with his earlier bouts with heart disease, Louie’s Christian faith was his comfort and his foundation; placing his trust in God, he weathered more storms than most. The strength of his belief never wavered, even when things became dire, and so the news of his passing came as a shock to his friends, who somehow had hoped that he would always be among us.

His work, his legacy, lives on, and always will—for even those who never met him will not forget his generous, curious, friendly spirit, which was shared throughout the world via today’s technologies. His like will not be seen again.

Russell Potter is a professor of English and media studies at Rhode Island College. He has written books about hip-hop (Spectacular Vernaculars, 1995) the history of polar exploration (Arctic Spectacles, 2007) and a novel (PYG: The Memoirs of Toby, the Learned Pig). His newest book, Finding Franklin: The Untold Story of a 165-Year Search, was published in 2016 by McGill-Queen’s University Press. A shorter version of this obituary was published this past March 16 in his blog, Visions of the North.