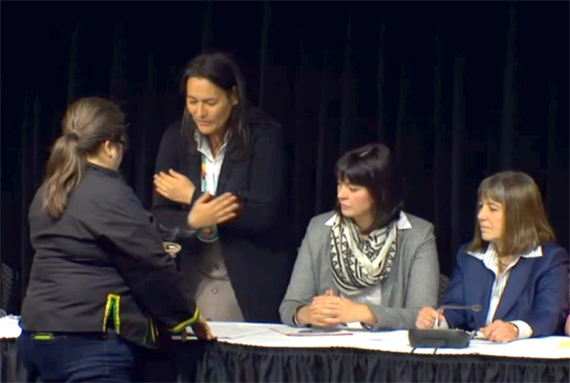 Commissioners with the National Inquiry into Missing and Murdered Indigenous Women and Girls say they will ask the federal government for an extension to their two-year mandate.

The commission noted this plan in a statement on Friday, Dec. 1, the same day the inquiry wrapped up a week of hearings in Mani-Utenam, an Innu community in northeastern Quebec.

Commissioners haven’t said how much more time they need to complete their mandate, which is currently set to end next fall.

The inquiry is about 15 months into its initial two-year mandate, and it’s been just three months since commissioners began hosting community hearings across the country.

Already, the commission has made changes to its schedule. The inquiry was set to hold its first Nunavut hearing in Rankin Inlet starting Dec. 11, but commissioners announced Nov. 24 that they would have to postpone the hearing because the local venue booked to host the event wasn’t private enough.

Inquiry staff have yet to indicate when they plan to return to Rankin Inlet, though the CBC has reported that the hearings are now booked for mid-January 2018.

Responding to requests and questions about a Montreal-based hearing, commissioners said the city has been identified as a hearing location.

But commissioners have yet to announce the next set of hearing dates and locations.

“The wisest way to move forward is to extend the process to truly honour and respect the families that have suffered in silence for too long,” commissioners said in a Dec. 1 statement.

“We are calling upon the Canadian government to grant an extension. We will continue to work towards fulfilling our mandate in a meaningful and culturally appropriate way.”