“Even though there are community directors, they want to hear from the president” 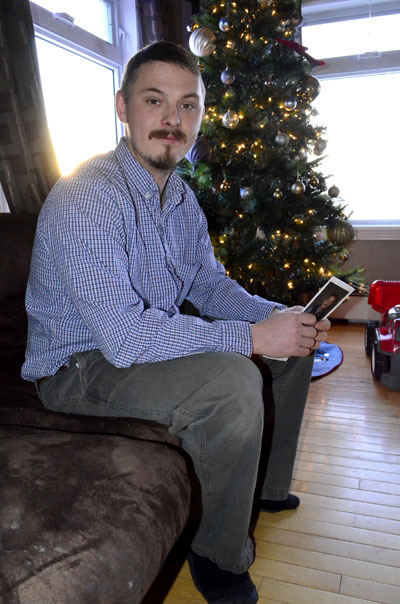 PJ Akeeagok at home in Iqaluit Dec. 12, when he was still waiting for a recount in the Dec. 8 QIA president’s election. That recount, done Dec. 14, showed Akeeagok had defeated runner-up Mikidjuk Akavak by two votes. This is the first election that Akeeagok, 30, has contested. (PHOTO BY JIM BELL)

After Pauloosie (PJ) Akeeagok takes his oath of office this January for the top job at the Qikiqtani Inuit Association, he’ll already know what to put at the top of his to-do list: reconnection with Qikiqtani region beneficiaries.

“They want the president to talk about the key issues that QIA does, and more importantly, to hear the concerns from the people directly,” Akeeagok, 30, said Dec. 12 in an interview with Nunatsiaq News.

To fix that, Akeeagok said the QIA president must make more community visits and meet face-to-face with beneficiaries in their homes.

He learned that during his recent campaign, when he walked from door-to-door in Iqaluit and three other communities — Kimmirut, Cape Dorset and Arctic Bay — to listen to Inuit in their homes.

“People welcomed me, made me eat, gave me supper that day, gave me bannock for the road. But having tea was by far the most enjoyable part because then they shared a lot. There’s a lot that I gained from doing the door-to-door,” he said.

Akeeagok took the presidency of the QIA Dec. 14, following a protracted afternoon recount that left him with 756 votes, only two ahead of Mikidjuk Akavak, who took 754.

That mandatory recount reversed the unofficial result that emerged after the Dec. 8 election day, when Akavak led Akeeagok by three, polling 758 to Akeeagok’s 755.

QIA’s disconnection with Inuit beneficiaries expressed itself in the Dec. 8 election’s weak turnout: 31 per cent.

That means 69 per cent of eligible Baffin region beneficiaries — more than two of every three — couldn’t be bothered to cast ballots.

It’s still better than the 28 per cent turnout produced by the Dec. 14, 2009 by-election that saw Okalik Eegeesiak elected as QIA president.

But it’s worse than the 32 per cent of eligible beneficiary voters who turned out Dec. 12, 2011 to re-elect Eegeesiak.

This past July, Eegeesiak departed the QIA to serve as international chair of the Inuit Circumpolar Council.

In the meantime, Larry Audlaluk of Grise Fiord, elected as QIA vice-president in December 2013 by way of a vote that saw a turnout of only 25 per cent, served as interim president until the election period began about six weeks ago.

Audlaluk stepped down from the interim president’s job to run as a candidate in the Dec. 8 election, where he finished third. He’ll now serve as interim president until Akeeagok is sworn in next month.

To reconnect beneficiaries to the organization and make it more accountable, Akeeagok proposes the following:

• create a QIA annual report, starting with his first year in office;

• start an annual open house to invite beneficiaries to visit QIA’s offices and learn about QIA programs and services;

• establish an annual year-in-review forum to give beneficiaries a chance to pose direct questions to the president; and,

He also suggested that beneficiaries are turned off by election candidates who make numerous promises they can’t keep.

“That’s why the voter turnout is so low. There are too many promises made and you can’t live up to all the promises so I kept my platform and my topics very practical. I’m a practical kind of guy. So I said whatever I promise you, I will live up to.”

As a young father of two children, Akeeagok said he understands the needs of children and their parents — especially with respect to daycare.

“They are our future. I have two kids of my own, one who is in kindergarten and one who has just started daycare. My panik’s five and my son is two. [I know] the prominence that daycare plays in what they are.”

He points out that the Kakivak Association, one of the QIA’s affiliated organizations, already provides daycare subsidies to Inuit parents.

Akeeagok said he wants to expand that support for Inuit children and parents, and proposes the following:

• give elders more prominence in daycares; and,

“The language is what makes my identity. It’s very important to me.” Akeeagok said.

And the QIA, through Kakivak, can exert an influence over early childhood education.

But the level of support it offers parents has not increased for many years, he said.

“That program is one of the most important programs that Kakivak offers because it allows parents to go out and work. But what’s most important to me is what the child is learning.”

And he said that the Tumikuluit Inuit language daycare offers an example that should be replicated in other communities.

On resource development, Akeeagok said the QIA should not develop a resource royalty policy without first doing extensive consultation with communities.

Thanks to revenues flowing from its Inuit impact and benefits and commercial land lease agreements with Baffinland Iron Mines Corp. on the Mary River project, QIA reported an $18.7 million surplus at its annual general meeting this past October.

But the QIA does not have a policy right now to guide the use of that money.

To develop such a policy, Akeeagok proposes the following:

• ensure children are the primary focus of benefits;

• ensure the benefits are far-reaching and last for generations;

• ensure hunters are supported by a revamped harvesters support program; and,

“It comes down to Inuit designing how that money is going to be spent,” he said.

Akeagok, originally from Grise Fiord, has lived in Iqaluit for the past eight years and has spent almost all of his working life serving Inuit organizations.

After spending two years at the Nunavut Sivuniksavut program in Ottawa and another two years studying political science at the University of Ottawa, Akeeagok has worked for Inuit Tapiriit Kanatami, Nunavut Tunngavik Inc. and most recently, the QIA.

But his strong showing in the QIA president’s election — the first election he has ever contested — was humbling, Akeeagok said.

“When the results began to come in I felt so small, so humbled, especially by the 355 people in Iqaluit who saw my vision. It was very humbling.”