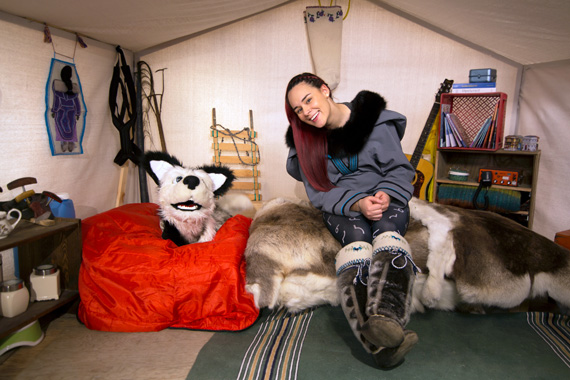 If you have young children who are up early on Saturday mornings, send them to start their day in Anaana’s Tent.

The new children’s series, produced by Iqaluit-based Taqqut Productions, is offering a half hour of preschool-focused entertainment and education, through live-action performances, puppetry and animated segments.

The new show airs for the first time May 12 on APTN.

Rita Claire Mike-Murphy is hosting the new Inuktitut and English-language show, with the help of Qimmiq the husky puppet.

“The way we usually describe the show is like a Sesame Street, but in Inuktitut,” Mike-Murphy said. “We’re learning to count, reading stories and we have a bunch of musical performances too.”

In the first season of Anaana’s Tent, viewers can look forward to special guest appearances by Beatrice Deer, Looee Arreak, Celina Kalluk and The Jerry Cans, who also perform the show’s opening song.

The show’s first 13 episodes were filmed in a tent or qarmaq fashioned on set in Taqqut’s office in Iqaluit.

With Tundra Valley being one of the few neighbourhoods still on trucked water, Mike-Murphy said the crew had to time the shoot around the beeping sounds of trucks, as well as the noisy flight schedule.

This is the first television gig for Mike-Murphy, who has another side career as singer-songwriter Riit. She said she loves the idea of creating Inuit-relevant television for youngsters, something that was limited in her own childhood.

“I think Anaana’s Tent is really geared towards teaching preschoolers,” she said.

And that happens through an Inuit lens, she said, whether it’s learning to count in Inuktitut, or teaching viewers on-the-land preparedness.

The show aims to impart values like kindness, friendship, patience and environmental stewardship, said its writer and director, Roselynn Akulukjuk.

“I am proud of this series because quality programming that’s educational should be at the forefront for youngsters,” she said.

“It’s so important for children to watch TV in our language and be ready for school already knowing a basic level of Inuktitut.”

The show’s English-language version will air in the fall of 2018.