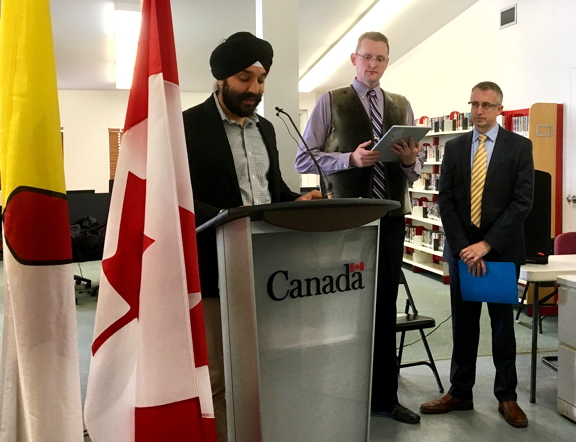 Navdeep Bains, minister of innovation, science and economic development, announces, at the Iqaluit library Sept. 14, that his government will give Northwestel “nearly $50 million” to improve Nunavut internet infrastructure. (PHOTO BY FRANK REARDON)

The federal government says it will give Northwestel “nearly $50 million” to improve high-speed internet coverage across Nunavut—but don’t blame northerners if they roll their eyes at the news.

Navdeep Bains, the minister of innovation, science and economic development, made the announcement in Iqaluit Sept. 14, saying the spending “will attract an additional $73 million from Northwestel, which will build the backbone satellite network needed to make higher-speed internet available in every community across Nunavut.”

The news release said the money will ensure households in Nunavut have internet speeds of at least 5 Mbps, a figure most northern internet users would agree is still relatively slow compared to the rest of Canada.

And although Ottawa’s release promises that this upgrade will allow Canadians “to participate fully in the digital economy, seize new business opportunities, and connect with friends and family around the world,” it doesn’t quite satisfy minimum speeds established by the Canadian Radio-Television and Telecommunications Commission.

The CRTC ruled in December 2016 that, no matter where they live, Canadians deserve a base level of internet connectivity speed: 50 Mbps download and 10 Mbps upload

But both Northwestel and Bains are promoting the announcement as a big gain for the North.

“By the end of 2019, schools, health centres and service providers across Nunavut will have broadband speeds significantly faster than those available today,” said Curtis Shaw, chief operating officer for Northwestel. He didn’t elaborate on “significantly faster.”

The $50 million from Ottawa is part of a “Connect to Innovate” program announced in the 2016 Liberal budget which set aside $500 million to improve high speed internet in rural and remote Canadian communities.

That means Nunavut—home to nothing but remote communities—will get roughly 10 per cent of that total fund.