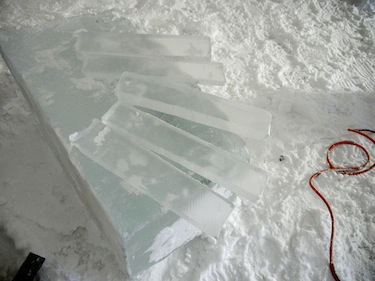 A block of ice is carved up for a set of ice chimes for the Feb. 19 ice music concert in Iqaluit. (PHOTO BY JANE GEORGE) 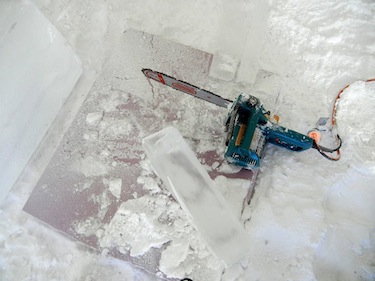 This chainsaw is used, along with other tools, to make instruments out of ice for Terje Isungset. (PHOTO BY JANE GEORGE) 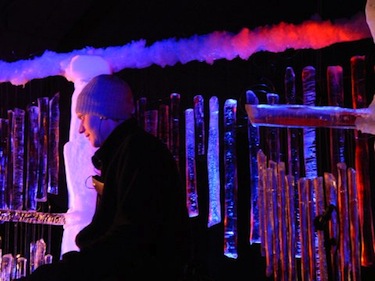 Here Terje Isungset performs in an outside concert with an instrument that includes hanging ice chimes. (PHOTO COURTESY OF T. ISUNGSET)

People who live in Iqaluit are used to ice: they melt it for fresh drinking water, they travel over it to hunt seals and jig for fish.

But on Feb. 19, they’ll see that ice can also make music.

“Fantastic” is how Terje Isungset, an acclaimed jazz musician and percussionist from Norway, judges the tone of a piece of ice he wants to use in his Feb. 19 concert of ice music at Inuksuk High School in Iqaluit.

On the day before the concert, Isungset’s ice instrument maker, Bill Covitz, stands inside in a tent in front of the high school, where he’s using a chain saw, pick, blow torch and other tools to carve the instruments that Isungset will use for his music.

These are likely to include ice chimes, an ice harp and an ice horn carved out of ice.

Maybe that horn could be made out of sea ice, but then “your mouth would get salty,” Covitz jokes to Isungset.

Isungset believes his ice music will get a warm reception from members of the audience in Iqaluit.

“People in the North have a respect for nature, they have respect for ice,” he said in a pre-concert interview.

Among the works on the program for Iqaluit: “A Glimpse of Light,” performed by Isungset with singer Mari Kvien Brunvoll, in which her voice highlights the sounds of ice chimes and coloured lights playing on the ice.

Tones and colours are central to Isungset’s music, which is often described as innovative, visual, energetic, and different.

Every time Isungset performs the piece, it is totally different.

And if Isungset hits one of his instruments too hard, it may shatter.

But none of that makes Isungset anxious.

Temperature can also affect quality of sounds. In warmer temperatures, the instruments begin to sound like…water.

“There is nothing I can do,” Isungset said. “Nature is the boss.”

When Isungset’s ice music concert ends, the instruments are left to melt and go back to the earth, he said.

Isungset, now 48, first played ice music in 1999 during a concert held at a frozen waterfall that was commissioned by the Lillehammer Winter Festival in Norway.

He decided to use elements from the river itself as musical instruments in his composition, such as stones, wood and ice.

Since then, Isungset has produced six CDs of ice music and organized an annual ice music festival in Norway, as seen here in a video from the 2012 festival.

He’s also been commissioned to compose for more than 40 works for jazz festivals, dance performances, theatre, film. He’s performed in temperatures ranging from minus-33 C in northern Norway to plus-30 in Italy.

The Feb. 19 concert will be held indoors, because with Iqaluit’s frigid February temperatures, it will be too cold for the audience.

But Isungset says playing ice music outside at night is magic.

“If you look up at the skies. You understand that you are something that lasts only an instant not only on earth, but in the universe.”

After Iqaluit, and an outdoor recording session Feb. 20, Isungset heads off to Washington D.C, where he will perform two sold-out concerts at the Kennedy Center.