In 2019, the MS Roald Amundsen will sail from Alaska to Greenland 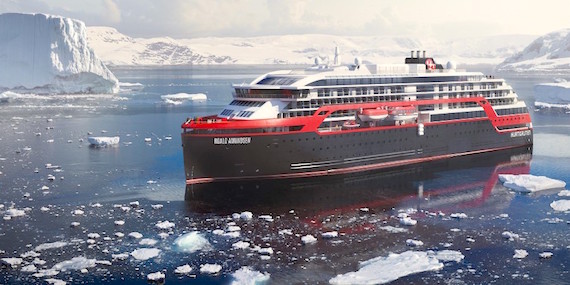 Here’s an artist’s rendition of the Hurtigruten’s MS Roald Amundsen, a new hybrid electric cruise ship—which the company calls “the world’s greenest vessel.” It will also be the first such vessel to transit the Northwest Passage in 2019. (PHOTO COURTESY OF HURTIGRUTEN)

The 250-metre-long Crystal Serenity, the largest passenger vessel to ever transit the Northwest Passage, first in 2016 and again in 2017, will not return to Canadian Arctic waters next year.

But there’s a new player on the horizon that promises more environmentally friendly cruises.

It’s Hurtigruten, the big Norwegian cruise, ferry and cargo operator. Founded in 1893 to operate voyages on Norway’s western and northern coast, the company has since spread south to offer cruises off Antarctica and now has its eye on the Northwest Passage.

“Honouring our explorer heritage, we are constantly seeking new waters to explore. With our new ships and new itineraries, Hurtigruten is setting a new global standard for exploration travel to the polar edges of the world—and to new frontiers,” said Hurtigruten chief executive Daniel Skjeldam in a recent release.

The company plans to launch its new hybrid electric ship, the 140-metre MS Roald Amundsen, which it calls “the world’s greenest vessel,” on a 2019 voyage from Alaska to Greenland through the Northwest Passage.

The ship is one of two now under order for Hurtigruten, the world’s first hybrid electric-diesel power cruise vessels.

That means the Roald Amundsen will also become the first electric-power cruise vessel to travel in the Northwest Passage.

It’s expected that the hybrid nature of Hurtigruten’s new vessels will reduce fuel consumption and greenhouse gas emissions by 20 per cent.

And they will be able to sail with solely electric propulsion for up to 30 minutes, to allow for “absolutely silent cruising in sensitive areas,” Hurtigruten says.

“Sailing on electrical power is not only a great benefit for the environment, but it will also enhance the impact of experiencing nature for the guests,” says information on the Hurtigruten website.

“The ship will be specially constructed for voyages in polar waters and serve as a comfortable base camp at sea—bringing adventurers from all over the world to the most spectacular destinations in the most sustainable way.”

That’s because for Hurtigruten’s Northwest Passage cruises in 2018, the 300 or so passengers booked on the 114-metre MS Fram will arrive in Cambridge Bay Sept. 9 as another group leaves from Cambridge Bay for Montreal.

Other stops on the 2018 Hurtigruten Northwest Passage cruises include Gjoa Haven, Fort Ross, Beechey Island, Dundas Harbour and Pond Inlet, and then, in Greenland, Ilullissat, Sisimiut and Kangerlussuaq.

The 10-year-old ship, named after the Fram—sailed by Norwegian mariner and explorer Fridtjof Nansen, has a capacity of 318 passengers, who will pay roughly $15,000 and upward for the experience.

In 2019, Hurtigruten again plans to sail through the passage, also with the Fram.

For its 2018 transits, the cruise company should file a proposal with the Nunavut Impact Review Board as a tourism project, but, like the Crystal Serenity, it’s unlikely that its planned Northwest Passage transits would be obliged to undergo full environmental assessments.