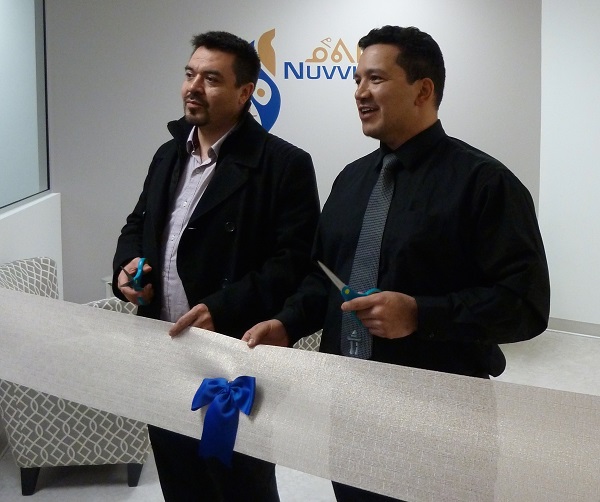 Makivik Corp. treasurer Andy Pirti and Nuvviti board member Tommy Palliser prepare to cut the ribbon at Nuvviti’s new Montreal office opening in March. Just a year into its operations, Nuvviiti is already undergoing some restructuring. (PHOTO COURTESY OF MAKIVIK)

The one-year-old business development corporation for Nunavik Inuit has a new board of directors and the region’s two major airlines are now under its control.

Nuvviti Development Corp. is being restructured, slightly more than a year after the new entity was first established.

Makivik Corp. launched Nuvviti last spring to help the organization separate its business affairs from its political work, and to oversee Makivik’s subsidiary companies and grow the region’s investments.

But Charlie Watt, elected as Makivik’s returning president in January 2018, raised concerns that the entity was duplicating Makivik’s work and taking ownership away from the region’s Inuit.

This spring, Makivik struck a committee to look at Nuvviti’s model and concluded it was beneficial to have a separate body oversee its business interests.

“They wanted Nuvviti to continue and pursue that responsibility,” Watt said.

To replace them, Makivik has appointed four Nunavimmiut to sit on Nuvviti’s new board: Johnny Adams, Noah Tayara, Johnny May and Tommy Palliser. Palliser previously chaired Nuvviti’s original board.

Another four directors will be appointed in the coming weeks, Watt said, to expand the board’s membership to eight.

Watt declined to comment on the change in directors.

Another major shift: while Makivik-owned First Air and Air Inuit weren’t initially managed under Nuvviti’s board of directors, they will now see their own individual boards disbanded while they come under Nuvviti’s umbrella.

“We’re trying to deal with this one step at a time, without confusing the hell out of people,” he said. “There are still certain overlaps to deal with.”

Watt believes Makivik has done well at making money through its businesses and reinvesting that money into Nunavik’s communities.

He’s concerned that having a separate entity to manage Inuit-owned subsidiaries and joint ventures further removes ownership and decision-making from Nunavimmiut.

“Personally, I don’t have a strong belief in separating politics and economics,” he said.

When Nuvviti was established last year, Makivik was the last of the four Inuit land claims groups in Canada to launch a business arm.