Info available for B.C. First Nations parents, but not in Nunavut 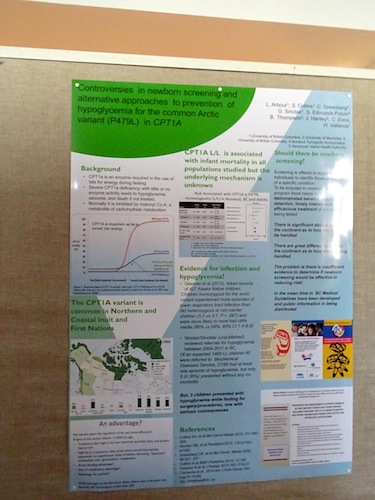 A poster at a presentation during the International Congress on Circumpolar Health in Oulu, Finland talks about an important threat to the health of babies in Nunavut. (PHOTO BY JANE GEORGE)

OULU, FINLAND — No newborn screening program or easy-to-access information for parents or health staff is yet available in Nunavut to help prevent life-threatening health reactions that could affect the majority of babies born in the territory.

But this information is already available in British Columbia to health workers and First Nations families, whose babies share the same variant of an important enzyme called CPT1a.

Seven in 10 infants in the Kitikmeot and Kivalliq regions of Nunavut and about half of the babies from the Baffin region are born with this variant of the CPT1a enzyme, which helps the body process fats for energy.

This enzyme variant, found in the majority of Nunavut babies, can lead them in some cases, about one in 300, to develop severe low blood-sugar, or hypoglycaemia, when they are sick or not eating properly.

The Arctic variant of CPT1a has been associated with infant mortality in all populations where it’s found, according to information presented at the International Conference on Circumpolar Health in Oulu, Finland.

Medical researchers believe this enzyme’s variant probably offered an advantage to people who migrated to North America from Siberia 3,000 to 5,000 years ago.

But now, that form of CPT1a, also found in Alaska, Nunavik and Greenland, can lead to severe low-blood-sugar complications. These may become worse during illness — and the effects can range from seizures to sudden unexpected death.

The CPT1a variant could also be associated with the overall high mortality of infants from one month to one year old in Nunavut, which is nine times higher in the territory than nationally in Canada.

For that same age group, Sudden Infant Death Syndrome in Nunavut remains more than 10 times higher than the Canadian average.

Babies with this CPT1a variant enzyme appear to be at risk of lung and ear infections.

And some, who have had to fast overnight before surgery, developed severe hypoglycaemia or extremely blood sugar levels, “one with severe consequences.”

As a child grows older, this apparent susceptibility to these dangerous low-sugar events appears to decrease.

Newborn screening for CPT1a variant is controversial, although some babies have received screening to identify the variant.

There’s not a lot of evidence yet on how well such screening works, but in B.C., medical guidelines and information have been already developed to provide more First Nations parents there with the information they need.

A brochure, also available online, describes the enzyme and tells them where to get more information.

B.C. guidelines for health workers say parents should be given an emergency letter to present to emergency personnel, because infants and children with the CPT1a variant, who cannot or will not eat, may need an intravenous dextrose solution to prevent dangerously low blood sugar from developing.

Dr. Laura Arbour, a medical geneticist at the University of Victoria and expert on the CPT1a variant, told Nunatsiaq News that she received money from the Canadian Institutes of Health four years ago to pursue research on CPT1a in Nunavut, but this research has not yet taken place.

A 2012 paper published in BMC Pediatrics, with input from Arbour, the Government of Nunavut and Nunavut Tunngavik Inc., on the “Causes and risk factors for infant mortality in Nunavut, Canada 1999–2011,” suggested the association between CPT1a and unexpected infant death could represent “a complex interaction of the variant with environmental risk factors including sleep position, bed-sharing, prenatal and postnatal tobacco smoke exposure and food security.”

That paper was followed two years later by an advisory suggesting Nunavut parents make sure their babies sleep on their backs.

When asked why Nunavut’s health department has not provided more information to Nunavut parents and health workers about the CPT1a variant, Arbour said she “could not say.”

Medical professionals in Oulu said what to do about CPT1a in Nunavut remains a highly “political issue,” due to the ongoing public health debate around what information to give people about the health risks they face, even when some of these are preventable.

That same debate over what to tell Arctic residents about toxic contaminants also surfaced during the Oulu health conference, which started June 9 and wraps up June 12.