Hamlet of Arviat concerned about polar bears on the streets 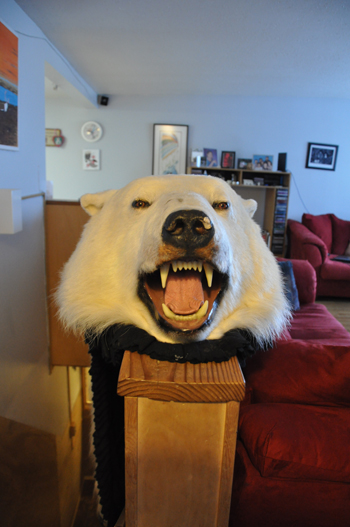 A stuffed polar bear head sits on display at an Arviat bed and breakfast. The local MLA has called on the territorial government to increase the number of polar bear hunting tags to the western Hudson Bay community to help deal with nuisance bears. (PHOTO BY SARAH ROGERS) 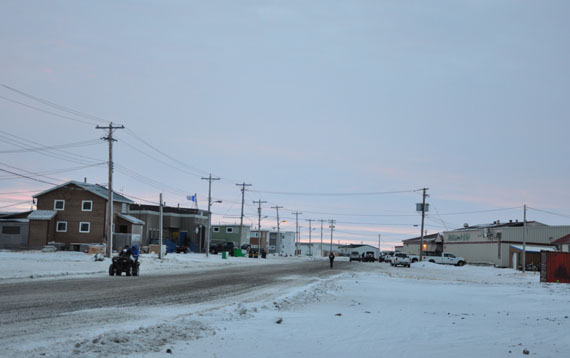 The hamlet of Arviat has decided to move Halloween trick-or-treating indoors this year to avoid any run-ins with polar bears. (PHOTO BY SARAH ROGERS)

Children and youth in Arviat can still count on filling their bags with treats this Halloween, but they’ll be doing it indoors this year.

That’s because the hamlet has decided to host a Halloween celebration at the community hall Oct. 31 to avoid door-to-door trick-or-treating, and the possibility of running into polar bears on the community’s streets.

Over the last decade, Arviat has grown a reputation as the polar bear capital of Nunavut. And that’s particularly true in October, when bears begin to make their fall migration North.

Even this past summer, the hamlet issued a rare July warning after polar bears were spotted eating at the local dump and wandering through the community of about 2,300.

Halloween night can attract more than 1,000 children and youth out on the community’s streets at nightfall, when it’s more difficult to spot the bears.

So this year, the hamlet went to its residents to propose an alternative to trick-or-treating.

“It was clear that the majority of people liked the idea of providing a safer environment for kids to celebrate Halloween,” the hamlet said in a post on its Facebook page Oct. 16. “The goal of this event will be to make sure our kids remain safe and still have fun.”

The hamlet will host the evening event Oct. 31 at the Mark Kalluak community hall, with the help of its recreation committee, along with local organizations and businesses.

Arviammiut showed support for the move on Facebook through the month, noting it allows the entire community to celebrate Halloween.

“Good thinking, the children’s safety should always be top priority,” wrote Mary Phinney. “I would gladly hand out my treats there.”

But a few pointed to other ways to ensure safety so as not to disrupt an annual tradition.

“If parents wants their kids to be sage they should be willing to look out for bears,” said Agaaqtoq Eetak. “If there is a bear, shoot it. I think Halloween would not be the same if kids didn’t go trick-or-treating.”

But since 2010, the community has not had to use its polar bear quota towards what it calls “nuisance kills” of polar bears, instead preferring to hunt the bears on the land.

But Arviat only has a small quota or number of hunting tags to hand out to polar bear hunters each year, given that the total allowable harvest of bears in that region is 24 polar bears.

Arviat South MLA Joe Savikataaq called on the territorial government last spring to increase the total harvest for polar bears along the west coast of Hudson Bay, where he says bear population have hit dangerous levels.

Arviammiut who want to donate material or time to the community’s Halloween event should contact the hamlet office at 857-2841.