“It was a serious breach” 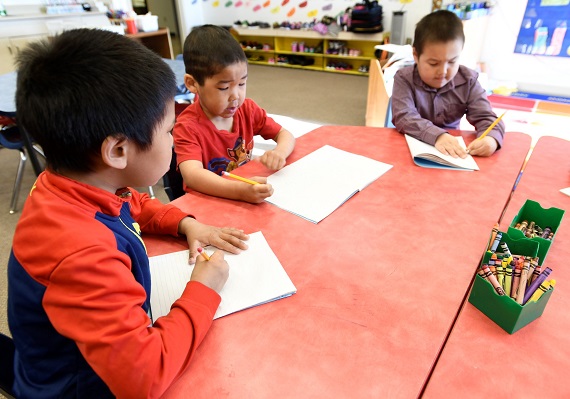 Under Nunavut’s existing Education Act, the territorial government is required by law to deliver bilingual education, says Nunavut Education Minister David Joanasie, “and we’re currently unable to deliver that due to a lack of Inuktitut-speaking teachers.” (PHOTO COURTESY OF GN)

“I have to apologize to all my colleagues for that breach with the legislative proposal,” David Joanasie said in an interview with Nunatsiaq News. “It was a serious breach.”

The document in question is a legislative proposal the department drafted in May 2018, as part of its second attempt to revise Nunavut’s Education Act and Inuit Language Protection Act, after Bill 37 failed last year. (Document embedded below.)

The draft proposal, circulated to some Nunavut organizations at the beginning of the month, and leaked to Nunatsiaq News, offers minor revisions to the amendments presented in Bill 37, including a more moderate delay in the roll-out of Inuktitut-language education.

The proposal puts an emphasis on moving those bilingual education deadlines forward to avoid a potential lawsuit from the territory’s Inuit birthright organization, NTI.

“There always is the potential for litigation and we had to consider that with this legislative proposal,” Joanasie said.

“The fact remains that the GN would be required by law to deliver bilingual education, and we’re currently unable to deliver that due to a lack of Inuktitut-speaking teachers.”

NTI’s president, Aluki Kotierk, has since denied that the organization has any intention of launching a lawsuit against the territorial government.

The Education Act currently requires the GN to deliver bilingual education from kindergarten to Grade 12 by the start of the 2019-20 school year.

The now-defunct Bill 37 proposed delaying the implementation of Inuktut instruction in Grade 4 to Grade 9 from 2020 until 2030.

This newer proposal spells out a plan to gradually introduce deadlines for bilingual education, starting with Inuktitut language arts in 2019 and a rollout for other Inuktut-language subjects between 2021 and 2024.

The GN has also come under fire for re-introducing the same amendments it tabled under Bill 37, with minor tweaks to deadlines and certain wording.

But Joanasie said the consultation process for a revised Education Act has been and remains open to the territory’s stakeholders.

“This draft is a working document, and there’s still a lot of room for input,” Joanasie said.

“We’ve been open with how we approach this bill and legislative proposal. This is just a starting point and we’re trying to get as much feedback as possible.”

Last week, Kotierk criticized the GN’s approach to the revised legislation, suggesting the GN has not provided the time and space for thoughtful reflection.

For its part, the GN said it invited an NTI representative to take part in its consultation tour. But Kotierk said the organization only had a week’s notice and couldn’t send a staff member for the first week of the tour, which got underway Sept. 17.

“An important factor is that we’re no longer proposing to amend the right of parents to receive Inuit-language education,” Joanasie said of the proposed changes to the legislation.

“Instead we’re proposing to align bilingual education that’s on par with our Inuit employment plan.”

That’s the government’s plan that sets targets on Inuit hiring and the tool through which the GN will recruit more Inuktut-speaking teachers.

Joanasie noted that both that plan and the Nunavut Teachers Education Program are being reviewed, with the goal of hiring more Inuit teachers across the territory.

For now, the GN will continue its consultation tour until the end of November. The department is accepting written submissions until Dec. 14 to its website or by email at info.edu@gov.nu.ca.

Joanasie said his goal is to table the new legislation in June 2019. It would then be referred to the Standing Committee on Legislation for review and come back to the Legislative Assembly in the fall.