“The extent of damage had the possibility of being significant” 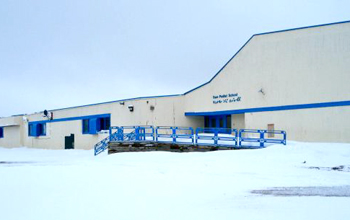 RCMP in Cape Dorset responded to two separate reports of arson at Sam Pudlat elementary school last week, neither causing significant damage to the community’s only school. Peter Pitseolak high school was completely destroyed in a 2015 fire. (PHOTO COURTESY OF THE GN)

Almost a year after Cape Dorset lost its Peter Pitseolak High School to fire, police are investigating two separate incidents of arson which targeted the Baffin community’s only other school.

The first, on Sept. 14, drew local RCMP officers to Sam Pudlat elementary school around 9:30 p.m. that evening to investigate a report of arson committed the previous day.

While there was no damage to the building, police charged two local youth with arson, disregard for human life and damage to property, the RCMP said in a Sept. 20 release.

Two days later, on Sept. 16, police received a second report of arson at the elementary school, this time causing “minimal damage” to the property and prompting the RCMP to lay the same three charges against two other youth.

The Nunavut RCMP said Sept. 20 that the two incidents are unrelated and the suspects involved are not the same, and that four youth now face charges.

“Although each separate incident resulted with minimal damage to property the extent of damage had the possibility of being significant,” RCMP said Sep. 20.

“The Cape Dorset RCMP and the Fire Marshall are actively working together to further educate the students both on the serious legal ramifications of arson along with the dangers of fire and fire safety.”

The community has been heavily impacted by the loss of Peter Pitseolak school, which was completely destroyed in a Sep. 6, 2015 fire.

Days later, police charged three Cape Dorset youth, aged 13 to 16, with arson with damage to property and arson with disregard for human life.

The loss of the high school put pressure on the community’s only remaining school, Sam Pudlat, to house secondary level classes through the 2015-16 academic year.

Both elementary and high school students used the space over an extended schedule that saw some students in class until 7:30 p.m.

This year, the Government of Nunavut installed temporary classrooms outside Sam Pudlat to house secondary classes, until a new high school is constructed, expected to re-open in 2019.

The RCMP could not say if any of the same youth involved in last year’s fire were implicated in the more recent incidents of alleged arson.

Under the Youth Criminal Justice Act, the identities of youth offenders aged 12 to 17 may not be published or broadcast.