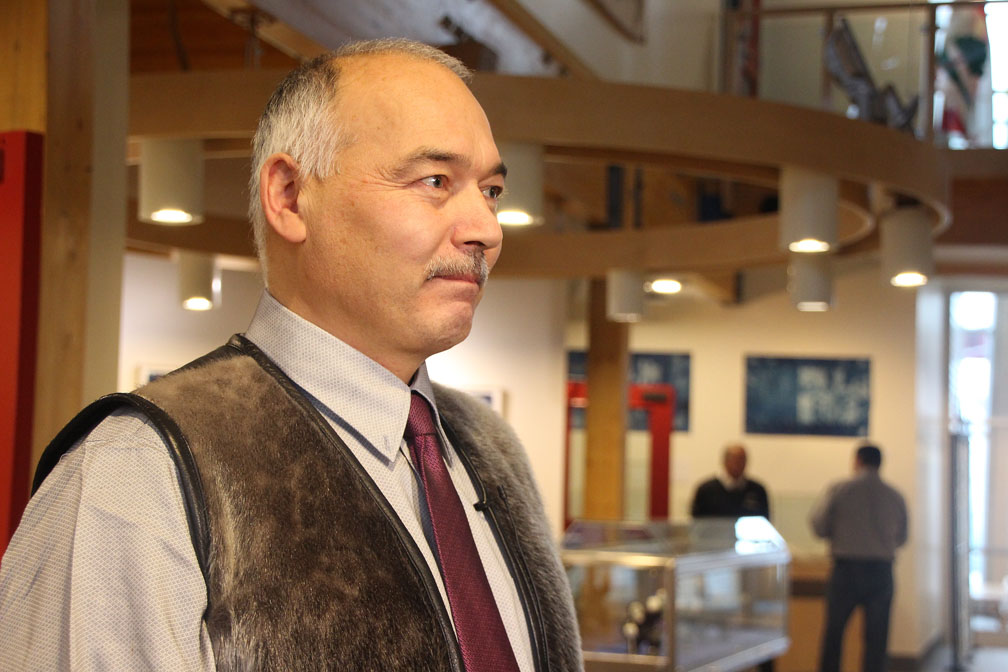 Premier Joe Savikataaq talks to reporters on the afternoon of Oct. 24, after announcing that he has removed Iqaluit-Niaqunnguu MLA Pat Angnakak’s cabinet responsibilities. (PHOTO BY BETH BROWN) 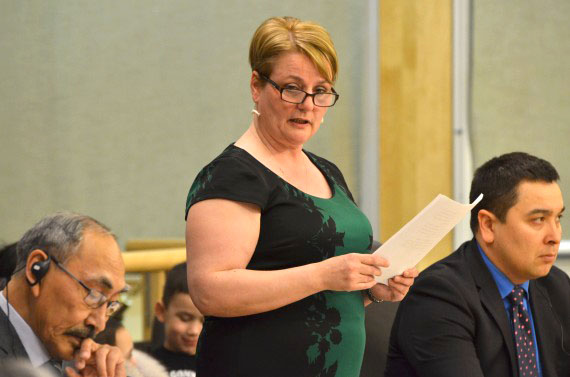 Premier Joe Savikataaq has removed Iqaluit-Niaqunnguu MLA Pat Angnakak’s cabinet responsibilities, saying she committed a serious breach of cabinet confidentiality in remarks she made at yesterday’s sitting of the legislative assembly.

“Yesterday, we saw a serious breach of cabinet confidentiality in the legislative assembly. As a cabinet, we cannot work together effectively if we cannot trust that our colleagues are able to maintain their oaths,” Savikataaq said in a statement made early this afternoon.

A breach of cabinet secrecy is one of the most serious gaffes a minister can commit, and is deemed a breach of their oath of office.

“Any breach is serious and this is what consensus government is about. When we have our cabinet meetings, everything there is confidential,” Savikataaq told reporters later that day.

Angnakak was not in the house when Savikataaq made the announcement.

Meanwhile, Angnakak will continue to sit in cabinet, for the time being at least, as minister without portfolio.

That’s because the Nunavut premier does not have the authority to remove cabinet ministers. Only the entire legislative assembly can do that, through a vote of non-confidence.

However, the premier does have the power to remove all responsibilities from a minister.

“Full caucus will make the determination whether to get rid of her as a minister,” Savikataaq said.

Savikataaq said he did ask Angnakak to resign and she declined. “When you swear an oath, and you break your oath, that’s the honourable thing to do in my opinion,” he said.

He did not say exactly what Angnakak’s breach consisted of.

But Savikataaq did confirm that it came during an exchange with Iqaluit-Manirajak MLA Adam Arreak-Lightstone, who asked Angnakak for information about the Government of Nunavut’s staff housing policies.

Angnakak said, “Yes, I do share that opinion. In fact I think we all do.”

And she referred to a review that staff from the Department of Finance and the Nunavut Housing Corp. are conducting.

“Draft policy amendments” have gone to cabinet, Angnakak said, but it appears as if those amendments may still be in front of cabinet.

“We have recently taken the draft policy amendments to cabinet and cabinet had supported a lot of the amendments,” she said. “I’m hoping that we’re not going to take forever on this. I think the interest is there to try to get this fixed as soon as possible.”

She also listed nine possible changes that she said the GN wants to make.

They included raising staff housing rents over time, making deputy ministers ineligible for staff housing and housing allowances, increasing the housing allowance for GN staff who own their homes or who rent in the private market, and various measures, including incentives, intended to increase homeownership among GN staff.

But Savikataaq said Angnakak’s statement does not reflect the position of his government, because the staff housing review is still in its early stages.

“We’re in the process of coming up with a new staff housing policy. It’s not policy yet. We are looking at it. It was confidential advice to that matter that was shared that cabinet has not made a decision on,” he said.

“We don’t know what the final outcome of our decision is going to be and we don’t want to pre-impose a position on the government that has not been decided by cabinet.”

While it sometimes looks as if ministers are reading responses from written responses, there are times when a minister has to provide an answer off the cuff, Savikataaq said.