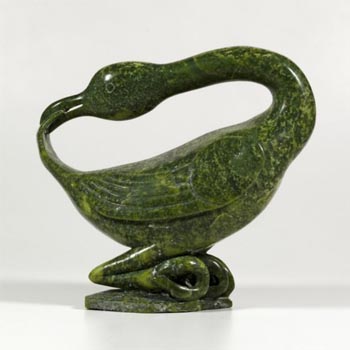 Pitseolak Niviaqsi’s 2000 sculpture Preening Tailfeathers is a good example of his flowing carving style, and focus on Arctic wildlife. (IMAGE COURTESY OF SPIRITWRESTLER.COM) 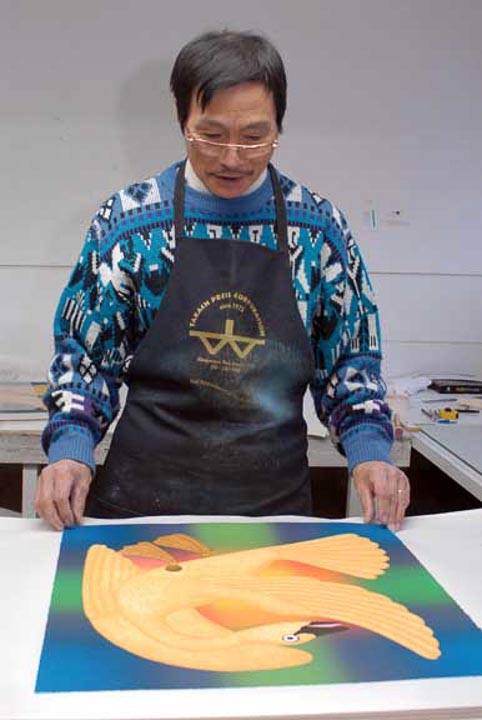 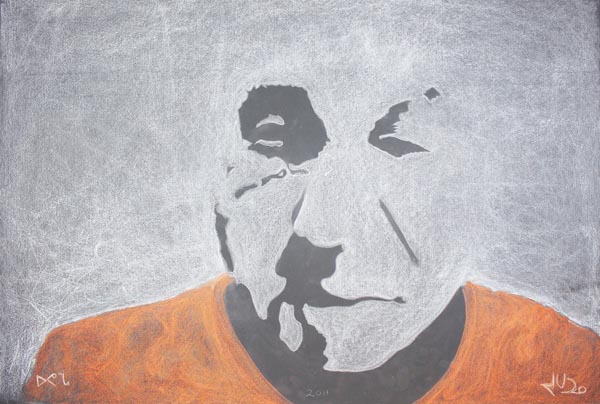 A 2011 self-portrait of Jutai Toonoo, called Untitled. Toonoo died suddenly at his home in Cape Dorset Dec. 28 of an apparent heart attack. He was 56. (IMAGE COURTESY OF DORSET FINE ARTS)

During a period normally reserved for celebration, the arts community in Cape Dorset was left to mourn the loss of some of its most prominent members.

On Dec. 28, well-known sculptor and drawing artist Jutai Toonoo was found dead in his home in Cape Dorset. He was 56.

Both artists were long-time contributors to the West Baffin Eskimo Co-op, and their work was known internationally.

But their similarities may have ended there, say the artists’ colleagues and friends.

Niviaqsi, who began work in Kinngait Studios lithography program in the mid-1970s, was best-known for his intricate and precise detail, in both sculpture and as master printer.

“He was a real creative soul,” said Bill Ritchie, a Newfoundland-based lithographer and adviser to the West Baffin Eskimo Co-op. “He was a consummate carver.”

He was dedicated to the studio, Ritchie said, only selling his work to the co-op.

Niviaqsi was a gentle person, his colleagues recall, and dedicated to his community, through both his art and his role of lay preacher in Cape Dorset’s Anglican church.

His sculpture produced graceful interpretations of wildlife, especially birds, representations of the sea goddess Sedna and images of his own family.

As a lithographer, Niviaqsi oversaw the printing of some of the most iconic images to come out of Kinngait Studios, including those of the late Kenojuak Ashevak and Kananginak Pootoogook.

Toonoo was no less dedicated to his art; friends said he died as he was often pictured in life, bent over his drawing table, reportedly of a heart attack.

But Toonoo veered away from the traditional, producing big, bold and often text-based sculpture and drawings, which always communicated a personal dilemma or discovery.

In a 2010 documentary on Toonoo and his artistry, produced by Eye on the Arctic, Toonoo described his art to an interviewer: “Most of the time, I just do whatever I please,” he said. “I couldn’t be a politician, because no one would ever vote for me.”

“It’s going to be really difficult to imagine him not being there,” said Ritchie, who had worked closely with Toonoo since the 1980s.

“Because his work was sort of the yin to the yang of everyone else’s work. He was so unique.”

Toonoo liked to incorporate text into his drawings and sculpture — passages from the Bible, a criticism of local politics or just something to express his current mood.

One piece Ritchie recalls was a drawing made up entirely of the words “fuck” and “shit” written hundreds of times in small letters. The words were only visible up close; from a distance they formed the shape of a landscape.

After Toonoo’s death, Ryan Oliver, of Nunavut’s Pinnguaq, tweeted a photo of his Toonoo carving which has two faces peering away from each other and on the back, the artist had inscribed: “So perverse are our elders, my uncle has a sexual relationship with my niece.”

Toonoo was agitated and talkative; he read voraciously, his friends said, and his work often reflected whatever he was reading about.

At the same time, there was a quality of softness to his work, they say.

Toonoo rode a bicycle throughout the year, Ritchie said, often getting children to push him up a hill, only to coast back down it.

“He was a real brilliant mind and kind of out of place because of it,” Ritchie said. “Nobody will replace him.”

It was the same year Toonoo did a residency at the Art Gallery of Ontario, and he stayed on at Feheley after to work on a new series of drawing on cancer cells, sketched out on giant 12-by-16-foot sheets of paper.

“He was a real philosopher,” Feheley said. “Not a poet in the traditional sense, but he had an incredible mind.

“His work was so original, so unique and so out there,” she said.

“I think he’ll emerge as one of the most important Inuit contemporary artists of all time.” 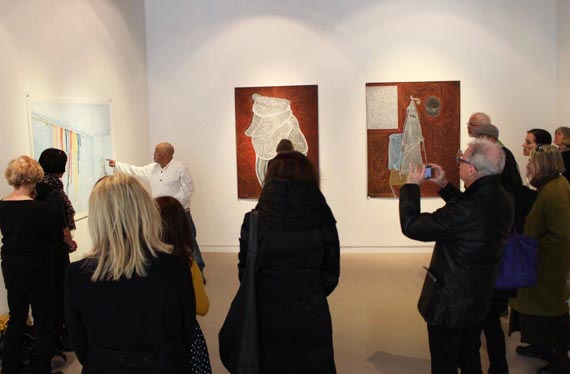 Jutai Toonoo talks about his work during a solo exhibit at Toronto’s Feheley Fine Arts gallery in 2014. (PHOTO COURTEY OF FEHELEY FINE ARTS)