Plan would replenish Lake Geraldine before the winter

By COURTNEY EDGAR AND SARAH ROGERS 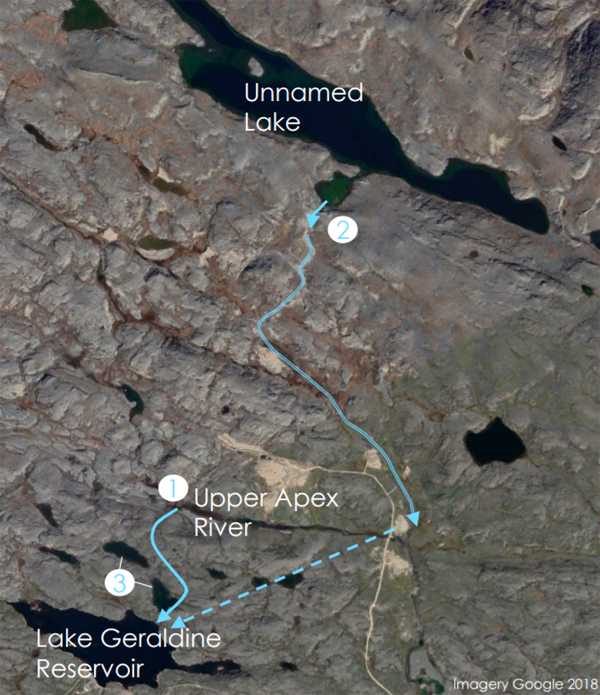 A water licence application prepared by the City of Iqaluit shows the two water bodies from which it plans to supplement Lake Geraldine: the Apex River along the Road to Nowhere, as well as another unnamed lake about 1.6 kilometres northwest. (IMAGE COURTESY OF THE CITY OF IQALUIT)

The City of Iqaluit will start pumping water this week into Lake Geraldine, as part of a two-month-long effort to refill the city’s freshwater reservoir before winter, city councillors heard Tuesday night.

Earlier that day, the Nunavut Water Board approved an emergency amendment to the city’s water licence to allow the municipality to draw water from the Apex River watershed to fill Lake Geraldine.

The temporary withdrawal is set to start Aug. 17.

The amended water licence was in response to a new assessment prepared for the city just last month that suggested there may not be adequate water to meet the community’s demands between now and early 2019.

The city is dealing with lower levels of precipitation, higher demand and water distribution losses. Typically, the reservoir is full by October, but that didn’t happen in 2017.

But municipal officials had to act fast to start the withdrawal process before winter, while Nunavut’s chief medical officer, Dr. Kim Barker, declared the city’s potential freshwater shortage over the coming year a “health emergency.”

The minister of Indigenous and Northern Affairs, Carolyn Bennett, agreed to have the amendment application expedited on an emergency basis. The water board’s decision now goes back to the minister for final approval.

“Given the urgent nature of this matter, the board would appreciate receiving the minister’s response as soon as possible,” the water board’s chair, Lootie Thomassie, wrote in the Aug. 14 decision.

While the emergency may not be imminent, Barker said the projections suggest Iqaluit could face a freshwater shortage that could put its residents at risk of health and safety issues.

In anticipation of that potential threat, Barker said it was “prudent” for her to issue the July 27 notice directing the city to intervene.

“Provision must be made by the city to ensure this situation is not ongoing annually,” Barker said in the letter.

The city’s existing Type A water licence allows it to use 1.1 million cubic metres of water in a year.

Under the amended licence, the city can draw an additional 500,000 cubic metres of water. This would be pumped from the Apex River at a location just over a kilometre upstream from the Road to Nowhere bridge.

Once the maximum permitted withdrawal has been made from the river, the city would supplement it with water from a lake 1.6 kilometres northeast of the end of the Road to Nowhere—part of the Apex River watershed—drawn with a pump and hoses.

City staff are already in the process of building a 200-metre trail to connect to existing sections of trail between the reservoir and river, where the hose will run.

Officials said they plan to meet with Qikiqtani Inuit Association about the route, to minimize any impact on the land. The city’s shooting range will also be closed at least until the pump-out is complete.

In its decision, the water board recommended the terms of the amendment be limited to the 2018 replenishment of Lake Geraldine.

If necessary, the city would apply for supplementary pumping next year, from Aug. 1 to Oct. 30, 2019, based on the success of this year’s pumping.