George Hickes, who represents Iqaluit-Tasiluk in the legislature, is moving back to cabinet after spending the past seven months as a regular MLA. (PHOTO BY BETH BROWN) Premier Joe Savikataaq shares his elation at being chosen premier June 14 before speaking to reporters in the foyer of the Nunavut legislature. (PHOTO BY BETH BROWN) 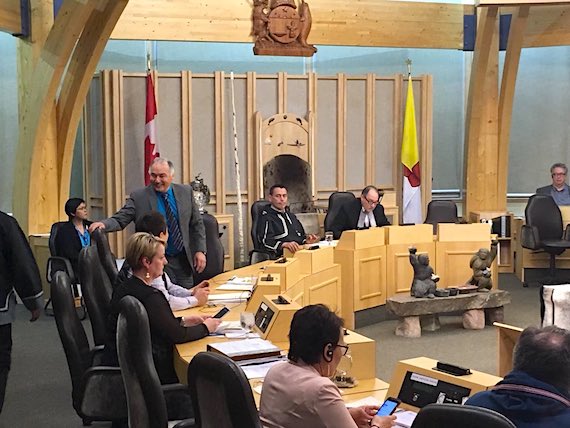 Joe Savikataaq gets up to shake the hands of his fellow MLAs in the Nunavut legislature June 14, moments after learning that he would be Nunavut’s fifth premier. (PHOTO BY BETH BROWN)

Nunavut has a new premier, Arviat South MLA Joe Savikataaq, along with a new face in the cabinet, Iqaluit-Tasiluk MLA George Hickes.

That’s after a whirlwind day in the Nunavut legislature, June 14, that saw Aggu MLA Paul Quassa, the premier, ousted by a non-confidence vote.

Of the 21 members who voted, 16 voted against Quassa.

After the MLAs gathered for a meeting of full caucus, they went directly into a leadership forum, nominating Aivilik MLA Patterk Netser, Lorne Kusugak, a cabinet member and MLA for Rankin Inlet South, and cabinet member Savikataaq who represents the riding of Arviat South to stand for premier.

Then those three nominees fielded questions from the MLAs on everything from their work ethic to their views on child sex abuse, domestic violence, devolution, elder care and education.

During the three-plus hours of questioning, Savikataaq sold himself as a hard worker, who would make sure the job came first.

Savikataaq said he’s honest and positive, and promised team work with MLAs, saying he would make use of the little resources that Nunavut has “to get big results.”

He also spoke about a need for training, and achieving higher rates of Inuit employment in government and mining jobs.

“We want all Nunavummiut to be educated at the same level,” he said. “We don’t want a second-tier system in Nunavut.”

But it took two ballots for Savikataaq to earn the chance to bring his ideas to Nunavut.

The first ballot did not show a majority for any of the three nominees. This led to a second round of votes between Savikataaq and Kusugak. Netser was out of the running after the first vote.

After the results were announced in Savikataaq’s favour, he went around the chamber shaking hands with his fellow MLAs. Quassa did not attend the leadership forum.

Outside in the foyer of the legislature, Savikataaq, who had a broad smile, spoke briefly to reporters.

“I feel humbled, but I feel very good. I’m honoured that the MLAs have entrusted me to take on the premiership. I won’t let them down,” he said.

Before being elected to the Nunavut legislature in 2013, Savikataaq, a wildlife officer, served on the hamlet council of Arviat for about 20 years.

“This morning was very stressful. There were no cheers. Nobody wanted it, it was something they felt had to be done,” he said about the motion that led to Quassa’s removal as premier.

“The issue this morning was management style. I have a different management style,” Savikataaq said, adding that he will use this style to work to get more federal government support for Nunavut.

As for his larger goals: “It’s bringing our elders home (and) treating our people that have mental illnesses. We have to help people who can’t help themselves.”

During the leadership forum, Savikataaq also said he wants to see an addictions treatment centre built in Nunavut, something many in Nunavut have been calling for.

Hickes, who served as health minister in the previous government, was returned to cabinet by acclamation, taking the place Savikataaq left open by becoming premier.

He said he couldn’t wait to get started on his new cabinet portfolio, although he’s still waiting to hear what that portfolio will be. “I’ve got a busy summer ahead of me,” he said.

“There are things in health I feel I didn’t finish,” but it’s up to the premier to decide the portfolio, he said.

Savikataaq did say he would likely take on the regular portfolio of the premier, which would leave his cabinet position in the Departments of Economic Development and Transportation or Environment open.

Savikataaq said it wouldn’t make good sense to do an extensive shuffle of the current cabinet.

When asked what the members meant in the morning session by their loss of confidence in the premier’s “leadership style”—that was the overarching reason members gave for demoting Quassa—Hickes couldn’t elaborate other than to say “everything wasn’t working.”

Two motions made by Hudson Bay MLA Allan Rumbolt saw Savikataaq recognized in the house as premier and Hickes as new cabinet member. Both were carried.

Then, at shortly after 8 p.m., it was time for speaker Joe Enook to thank the assembly staff for their hard work and wish everyone a safe summer and an abundant hunt during the summer.

“Those who are elected here today, we are proud of you,” he said.

The legislature returns Oct. 23 for its fall sitting and consideration of capital spending in the territory.

with files from Beth Brown and Jane George