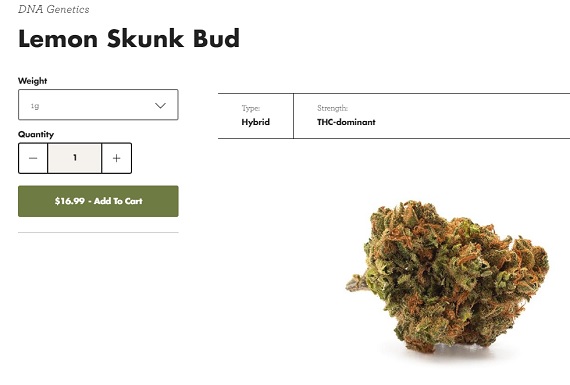 One of the four products currently offered at Tweed.com is a THC-dominant hybrid strain called Lemon Skunk, available at $16.99 a gram.

It’s only just become legal, but Nunavut’s newly renamed Liquor and Cannabis Commission says it has received “a lot of interest” from potential retailers hoping to sell cannabis within the territory.

Nunavut’s Cannabis Act allows private retailers to sell marijuana in Nunavut communities, but the commission has said it won’t consider that until next year, at the earliest.

The agency can’t even accept applications at this point, said the NULC’s director, Dan Young, until after it finalizes its permitting regime.

In the meantime, Nunavut has a deal in place with a single, online provider, Canopy Growth, whose Tweed outlet went into business on Wednesday, Oct. 17, as marijuana became legal across the country.

But the demand across the territory—and country—proved a bit more than it could handle.

Young said the commission office fielded phone calls all morning from customers unable to log into the online store.

“And it ran out of product at about 4 p.m. I was assured that it shouldn’t have happened at all. But it should be OK going forward.”

Young couldn’t say how much cannabis was sold across the territory on Oct. 17, but the NULC plans to release that data once it receives it from Tweed.

The website was re-stocked just a few hours later, but Young said the commission is still waiting to hear what other products the company will make available to customers in the territory.

Currently there are four strains of dried marijuana available, which vary in their content of THC, the psychoactive ingredient in cannabis.

Under its agreement with Canopy Growth, Tweed is meant to offer some 70 products on its site for Nunavut customers, including gel capsules, oils and pre-rolled joints.

“We didn’t think that all 70 would be available on day one, but we certainly thought that there would be more than four,” Young said.

The company has yet to say when it will start to roll out those other products.

To respond to demand, the NULC is currently developing a request for proposals and hopes to add to Nunavut’s online cannabis providers by the end of the year.