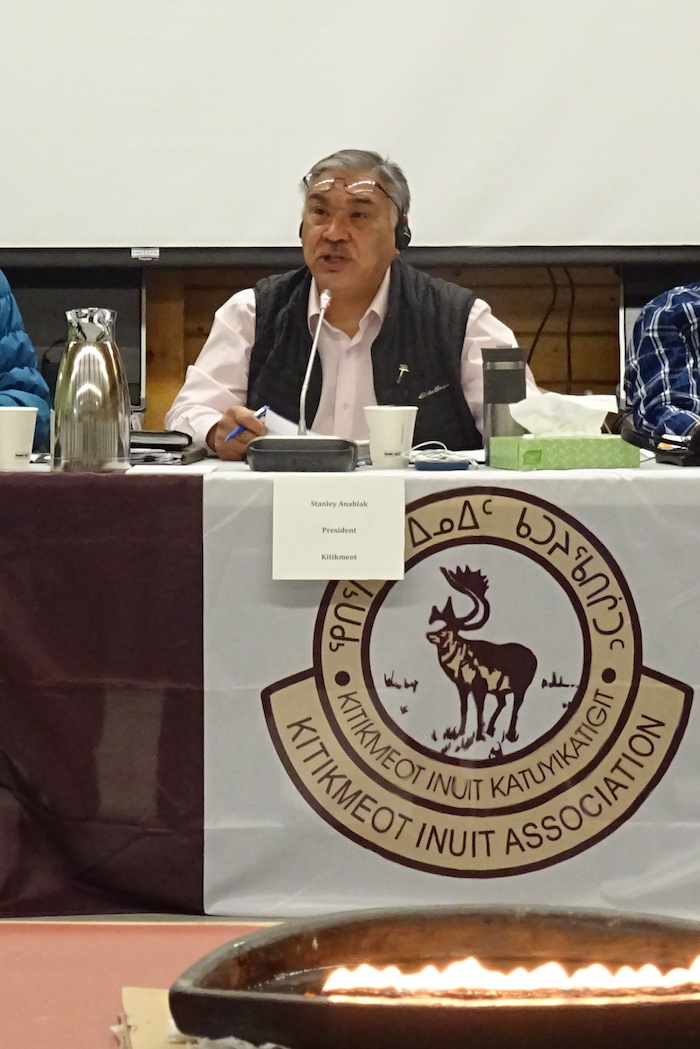 The Kitikmeot Inuit Association, which represents Inuit in western Nunavut’s five communities, says statements made last week in the legislative assembly about the Grays Bay Road and Port Project are “either inaccurate or need to be clarified to prevent misunderstanding about the events and actions that prompted them.”

Economic Development Minister Joe Savikataaq told the legislature on May 30 that the Government of Nunavut had decided to pull out of the Grays Bay project even before the federal government had rejected its funding proposal under the federal trades corridors program, and that “it was jointly agreed between the KIA and our government that we would hold off.”

Not so, said KIA President Stanley Anablak in a news release on Monday, June 4.

“KIA never requested to be the sole proponent of this project prior to the Government of Nunavut’s abandoning its role as co-proponent,” he said.

“Given the GN’s decision and our desire to continue to push the project forward, the only choice available to KIA was to become the sole proponent of the GBRP project,” Anablak said.

The GN said it would have had to commit 25 per cent of the estimated cost, or about $138 million, much more than the $2 million it did commit to the project’s development in June 2017.

“We would have had to put our share of the money out to make sure the road is done,” is how Savikataaq put it on May 31, responding to questions from Kugluktuk MLA Mila Kamingoak.

But the KIA said it had a financing plan that wouldn’t involve the territorial government being on the hook for all these funds, thanks to help from an unnamed third party that could be secured with GN support.

Anablak said the KIA tried on three recent occasions to speak with the GN about the project’s finances, without success.

“These offers were made in person in October and February, and by letter in April. None of these offers were taken up. This could explain in part the error in Minister Savikataaq’s statement that the GN needs to put up $138 million to “get it done.”

“The KIA was never given the opportunity to explain our approach to financing to the GN,” Anablak said, adding that the previous GN leadership—that of former Premier Peter Taptuna, who comes from western Nunavut—understood the approach and in fact helped to develop the financing plan.

The KIA also challenged statements made in the legislature that compared the Grays Bay project to private mining roads at the sites of Agnico Eagle Ltd.’s Meadowbank gold mine and Baffinland Iron Mines Corp.’s Mary River mine.

“Agnico Eagle in the Kivalliq built three roads totalling over 220 kilometres on their own,” Savikataaq said May 30. “They received no money from the federal government or from the territorial government. Baffinland Mines on Baffin Island built a road. I’m not sure how far it is, but I believe it’s at least 100 kilometres long. They did not receive any funding. “

“By creating access to these lands, KIA is aiming to create jobs, business opportunities and wealth for our membership. This economic development will be first and foremost for the benefit of Inuit, as contemplated by the Inuit negotiators of the Nunavut Agreement. However, it will also substantially benefit the governments of Nunavut and Canada by generating tax revenues and royalties. “

The Grays Bay project would involve the construction of 227-kilometre all-weather road running from the site of the defunct Jericho mine, which is located at the northern end of the Tibbit-Contwoyto winter road, to a deep-sea port at Grays Bay on Coronation Gulf.

There are significant non-mining related benefits, such as lowered cost of community re-supply, which would benefit Kitikmeot residents and the GN alike, he said.

The KIA said it still plans to forge ahead with the $500-million project, despite the GN’s decision to back away from the proposal.

“We are committed to moving the project forward to shovel-readiness, funding, construction and operation,” Anablak said, repeating a message made this past April when the KIA first learned about the GN pullout.

This spring, the KIA was disappointed to learn Grays Bay would not receive funding under the federal trade and transportation corridors program, which went instead to Nunavut airport overhauls.

But the KIA hasn’t yet given up on the GN.

“In the continuing spirit of cooperation, KIA remains very willing to meet with GN leadership to explain this project in the detail necessary to be fully understood,” Anablak said.