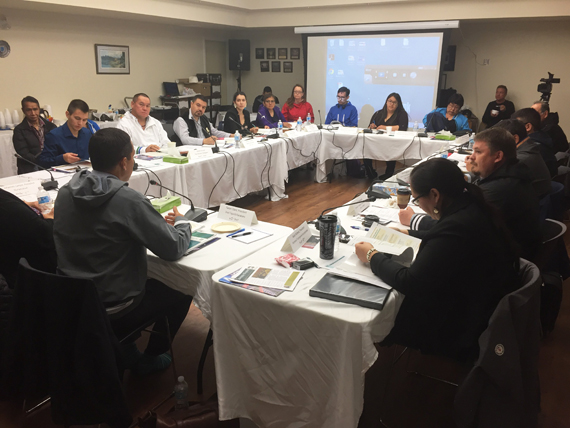 Inuit Tapiriit Kanatami’s board of directors and delegates discuss the development of federal child and family services legislation during the organization’s annual general meeting in Inuvik Aug. 15. (PHOTO COURTESY OF ITK)

The federal government is moving quickly towards developing new legislation to minimize the number of Inuit children and youth in foster care, Inuit Tapiriit Kanatami delegates heard this week.

What came from that was a pledge to develop new Indigenous-specific legislation, which could provide for culturally appropriate services and a shift to early intervention and prevention.

Now, Ottawa is moving ahead with consultations, with hopes of tabling the new legislation by the fall.

But ITK has made clear it’s on board.

Ottawa approached ITK to help develop the new child and family services legislation, which the organization has begun to do through an ad-hoc group.

One of its biggest challenges will be gathering statistics on Inuit children and youth in care across the country.

“If a youth is not able to access those services in their community, they’re often sent out of community and even out of region,” Sheldon said.

“But there’s very limited information on how many Inuit children and youth are in care, and where they’re in care. We need better access to those numbers.”

New legislation in Ontario reflects the number of youth sent south for some of those services; the province’s new child, youth and families legislation includes Inuit as a distinct group—the first time that’s happened in a jurisdiction outside of Inuit Nunangat.

Any legislation will have to reflect that reality, said Nunavut Tunngavik Inc. President Aluki Kotierk, as the number of Inuit continues to grow in Canada’s urban centres.

“It’s still not clear what role NTI should play,” Kotierk said, referring to Inuit placed in foster care outside of the territory.

While the federal government will be pressed to gather feedback before the autumn, ITK President Natan Obed said there’s broad support among Inuit to make this new legislation work.

“We have an opportunity here that we can capitalize on,” he told meeting delegates.

ITK is also tasked to help create an Inuit-specific program to ensure Inuit children have equitable access to public services, regardless of where they live and where they go to receive care.

First Nations children in Canada have that access through a federal policy called Jordan’s Principle, implemented in 2017 to resolve jurisdictional disputes between provincial/territorial and federal governments over the cost of public services—especially those children must leave home to access.

ITK has since lobbied to get access for Inuit families.

In the short-term, ITK said that Inuit families can now apply under the principle, called the Child First Initiative, until a new, Inuit-specific policy is in place.

Obed said the goal is to have that new policy in place by November 2019.