“We tried to negotiate more housing under this agreement, considering the shortage” 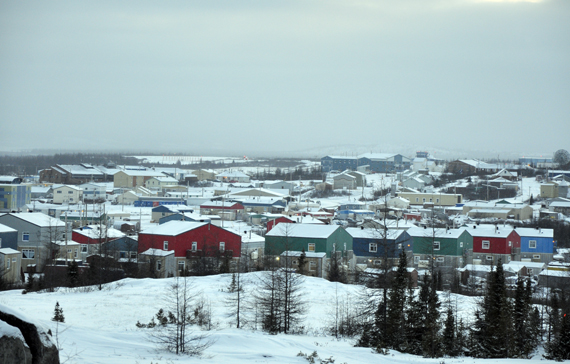 The federal government has proposed a one-year housing agreement for Nunavik that would run from April 1, 2015 to March 31, 2016, while negotiations would continue to determine the region’s housing provisions up to 2020. Kuujjuaq, pictured here, stands to get about 40 new social housing units in 2015. (PHOTO BY SARAH ROGERS)

The current five-year agreement between the Kativik Municipal Housing Bureau, Makivik Corp. and the governments of Quebec and Canada built housing in the region between April 2010 and March 2015.

But because the last of the housing covered by that agreement was built in 2014, the region needs a new contract to ensure new units will be built in 2015, Frédéric Gagné, who represents the Kativik Regional Government on Nunavik’s housing file, said at this week’s KRG regional council meeting in Kuujjuaq.

For the last few years, Nunavik — led by Makivik — has pursued the federal government to pay for a catch-up program to build enough housing in Nunavik to alleviate its housing shortage.

Makivik has said Ottawa’s failure to live up to its obligations under the James Bay and Northern Quebec Agreement has resulted in a housing crisis that leaves 68 per cent of Nunavik’s population stuck in overcrowded housing.

“We tried to negotiate more housing under this agreement, considering the shortage,” Gagné told a meeting of KRG regional councillors Nov. 24. “But the government wasn’t ready to commit at this point.”

Instead, he said, they offered a compromise: Ottawa has proposed a one-year agreement that would run from April 1, 2015 to March 31, 2016, worth just over $20 million.

“And this winter, we’ll continue negotiations towards that five-year agreement,” he said.

The one-year agreement still has to be finalized.

But if approved, it would distribute 60 new units — in addition to the 80 allotted under Quebec’s Plan Nord — to six different communities in 2015.

Housing was allocated to Kuujjuaq, Puvirnituq, Kangiqsujuaq, Kangirsuk, Quaqtaq and Kuujjuaraapik at the KRG’s May 2014 council meeting.

Those same communities will receive the additional housing under the new tripartite agreement.

The allocations are based on the KMHB’s 2013 housing survey, which showed a need for 899 new social housing units to accommodate Nunavik’s growing population.

The KMHB plans to update its housing survey in early 2015, KRG councillors heard Nov. 24, which could be used in future housing negotiations.

Makivik has argued that the region’s housing deficit stemmed from a period between 1994 and 1998 that saw no new housing construction in Nunavik.

But when Makivik failed to negotiate a catch-up program with Ottawa, the organization launched a dispute resolution mechanism in 2011.

In a September 2012 report, mediator Dominique Bourcheix found that Canada did not act in good faith during the renegotiation of a 2010-2015 housing agreement and encouraged both sides to return to the table.

Makivik has since been told the federal government is looking to Nunavik’s Inuit organizations to come up with new models to address the region’s housing needs.