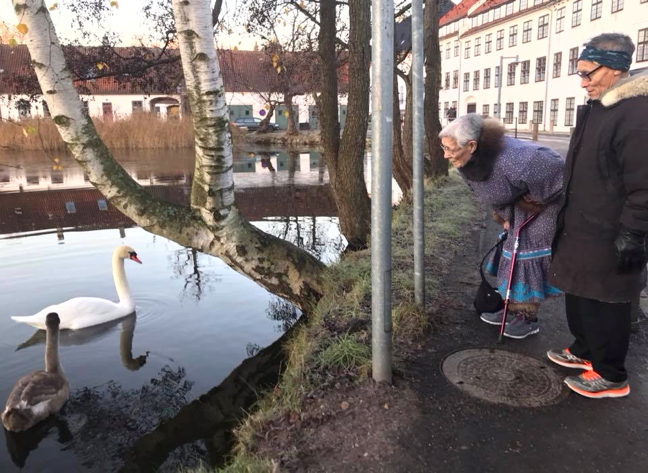 Bessie Omilgoetok and Joseph Tikhak admire the Danish national bird, the kuugyuq, as they arrive at the Danish National Museum Dec. 4. Omilgoetok and Tikhak were part of a Kitikmeot delegation that visited Copenhagen, Denmark, as part of a joint research project with the museum on Knud Rasmussen’s Thule Expedition. The Greenlandic-born explorer, who spoke Kalaallisut (Greenlandic Inuktitut,) was the first to travel the entire Northwest passage via dogsled. Rasmussen made five Thule expeditions, his last, and most famous, from 1921 to 1924, during which a team of seven, including Inuit guides, travelled 18,000 miles from Greenland to the Pacific Ocean. The Kitikmeot delegation of elders and researchers examined and identified a collection of artifacts Rasmussen gathered from what is now western Nunavut. See more photos on the Kitikmeot Heritage Society’s Facebook page. (PHOTO COURTESY OF KHS)